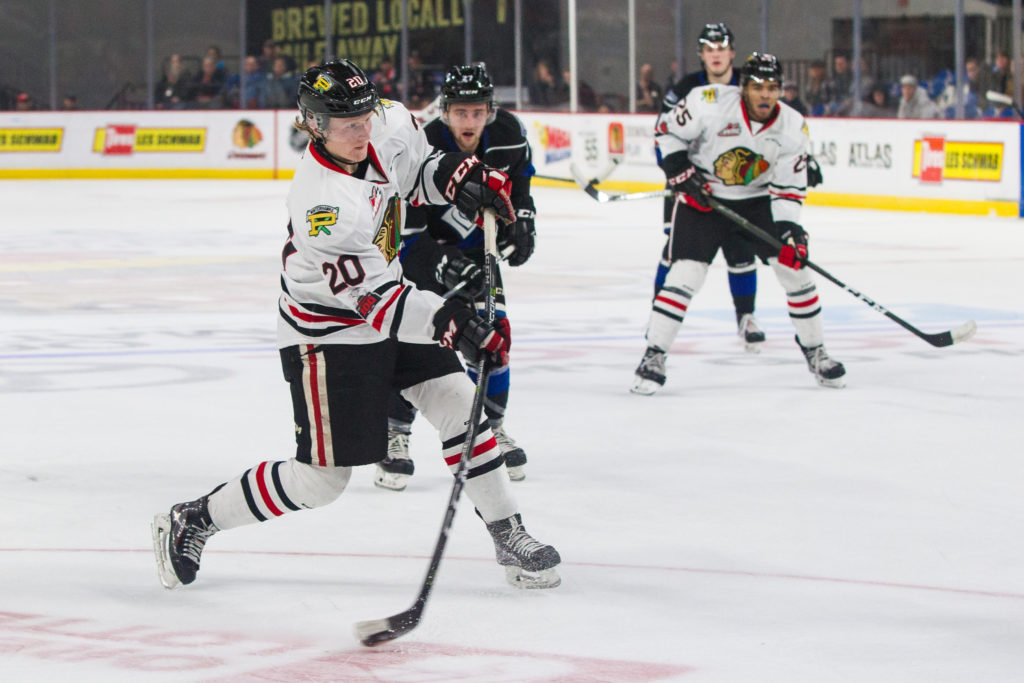 The Hawks and Royals meetup for just the second time this season tonight at the Moda Center. Victoria won the first matchup with Portland on January 17th here in the Rose City 4-2. The Hawks enter tonight’s game winners of three of their last four games, and have won four straight contests on home-ice.

PREVIOUS GAME: Winterhawks 3 vs. Americans 2: Kieffer Bellows scored twice and Shane Farkas made 29 saves as Portland took down the Tri-City Americans 3-2 on Saturday at the Moda Center.

The Americans got on the board first in the opening frame on a goal from Dylan Coghlan. But the Hawks quickly responded on the power play on a sweet feed from Cody Glass to Kieffer Bellows, for his 25th of the year to tie it at one. Portland would then take the lead after Joachim Blichfeld forced a turnover, and Ryan Hughes beat Patrick Dea to make it 2-1 Hawks.

The score would remain the same all the way until the third, when Portland eventually added another on a passing play between Skyler McKenzie, Glass and Bellows, who picked up his second of the game. The Americans would add one late to make things interesting, but Shane Farkas made several big saves to keep the Hawks up by one. The Americans would pull their goaltender but it wasn’t enough, as Portland came away with a 3-2 victory.

A total of 9,879 fans were at the Moda Center to watch the Hawks and enjoy “Banner Bank Mascot Night”.

TODAY’S OPPONENT: The Royals enter tonight in second place in the B.C. Division. They are have the same amount of points (68) as the first place Rockets, but have played two more games than Kelowna.

The Royals have won five of their last six games and eight of their last 10. A big part of their success has been the additions of Noah Gregor and Tanner Kaspick. Since coming over from Moose Jaw, Gregor is nearly a point-per-game player (11 in 12 games) and his speed fits perfectly with Victoria’s forward group. Kaspick has six goals in eight games since arriving from Brandon at the trade deadline.

Matthew Phillips continues to lead the way offensively for Victoria with 85 points in 54 games. In the Royals one game against Portland this season, Phillips had one goals and two assists.

Griffin Outhouse was between the pipes in Victoria’s win against Portland. The 19-year old goaltender has a .911 SV% on the season, which is tied for the 4th best in the WHL.

WINTERHAWKS TO KEEP AN EYE ON: In four games versus Victoria this season, three with Prince George and one with Portland, defenseman Dennis Cholowski has five points. The d-man has 11 points in 13 games with the Hawks, but is still looking for his first goal wearing a Portland sweater. For what it’s worth, Cholowski was the last player off the ice at yesterday’s practice; he was working on his shot.

Cody Glass, Kieffer Bellows and Skyler McKenzie all enter tonight on significant point streaks. Bellows and McKenzie are on seven-game streaks, Bellows has eight goals and six assists over that span, while McKenzie has four goals and five assists. Glass is on a six-game streak, and has two goals and eight assists in that time.

The Hawks will look to take advantage of the Royals poor penalty kill. Victoria has the 20th ranked PK in the WHL, and have allowed five power-play goals over their last four games.

STAT OF THE DAY: Portland is 25-4-0-0 when allowing three goals or less this season.

Portland is back at home on Friday to take on the Tri-City Americans. Make sure to grab your tickets HERE!