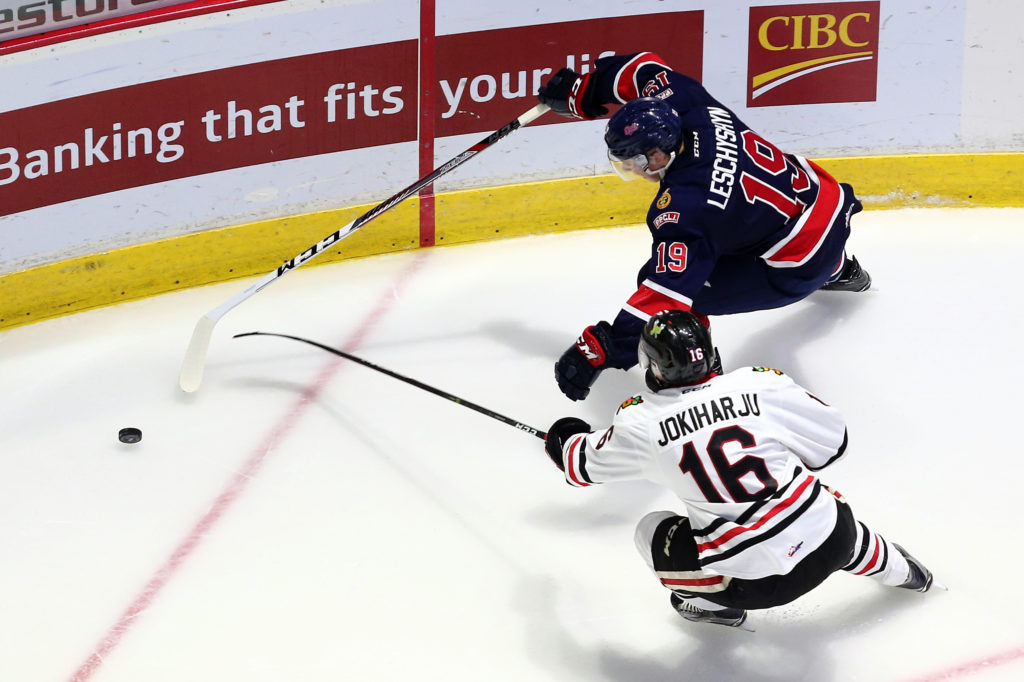 The Hawks welcome the Regina Pats to the Veterans Memorial Coliseum tonight for the two-team’s lone matchup this season. Last year, Portland defeated Regina 5-4 in overtime during the Hawks East Division swing. Portland enters the game on a five-game winning streak. For Regina, this is their first game of five straight against U.S. Division opponents.

Down 1-0 in the second, the Winterhawks would tie things up on a goal from Henri Jokiharju, his sixth of the season. Later in the period, Brad Ginnell potted the second Hawks goal of the night to give Portland a 2-1 lead after 40.

In the third, the Hawks dominated on the man-advantage. First, Cody Glass converted on a 5-on-3 powerplay to give the Hawks a 3-1 lead. Then, Skyler McKenzie buried one to pick up his 15th on the season and give the Hawks a 4-1 advantage. Portland would then add two more 5-on-3 goals from Glass and Ginnell to go up 6-1. In total, Portland would go 5-for-12 on the man-advantage with four third period 5-on-3 goals.

TODAY’S OPPONENT: The Regina Pats enter tonight’s game with the Hawks sitting fourth in the East Division. It has been an up and down season thus far for the Pats, who are 12-8-2-0 on the year and are 5-4-1 over their last 10 games.

Regina returns several top players from last season’s WHL Finals team. Sam Steel, the leading scorer in all of the CHL last year, enters tonight’s game with 21 points in 17 games. The Pats leading scorer is over-ager Matt Bradley, who has 27 points in 22 games.

The Pats have had some surprising offense from second round import pick Emil Oksanen. Despite being the last player taken in this year’s import draft, Oksanen is second on the team in points and has two four-point games.

WINTERHAWKS TO KEEP AN EYE ON:  Cole Kehler continued his stellar season last weekend, allowing just three goals on 70 shots in the Hawks two wins. Kehler is currently second in the WHL in goals against average (2.00) and save percentage (.938) and fourth in wins (12). Kehler has won his last five starts and has a 1.20 GAA and a .968 SV% over that span.

Cody Glass recorded his fourth multi-point game in his last five games last Sunday against Prince Albert. Glass now has 30 points on the season, good for first on Portland and 12th most in the WHL. In his 18 games this year, Glass has been held pointless just twice. He’s currently riding a five-game point streak and has four goals over that span.

Henri Jokiharju had five points in two games last weekend to lead all Winterhawks defenseman. The Chicago Blackhawks first-round pick now has 23 points in 18 games this season, good for fifth in scoring among D-men in the WHL. Jokiharju has registered six multi-point games this year, including four games where he’s had three-or-more points. The Finnish defenseman has been on the ice for 9 of the Winterhawks last 11 goals.

STAT OF THE DAY: Regina has lost four straight games to Portland, going 0-3-1-0 over the last four seasons.

The Hawks are on the road for their next six games as part of their season long Central Division swing. You can catch all the action at Winterhawks.com/listen or on the Winterhawks App. Portland returns home on Sunday, December 3rd against the Saskatoon Blades at the Moda Center. Get your tickets HERE!