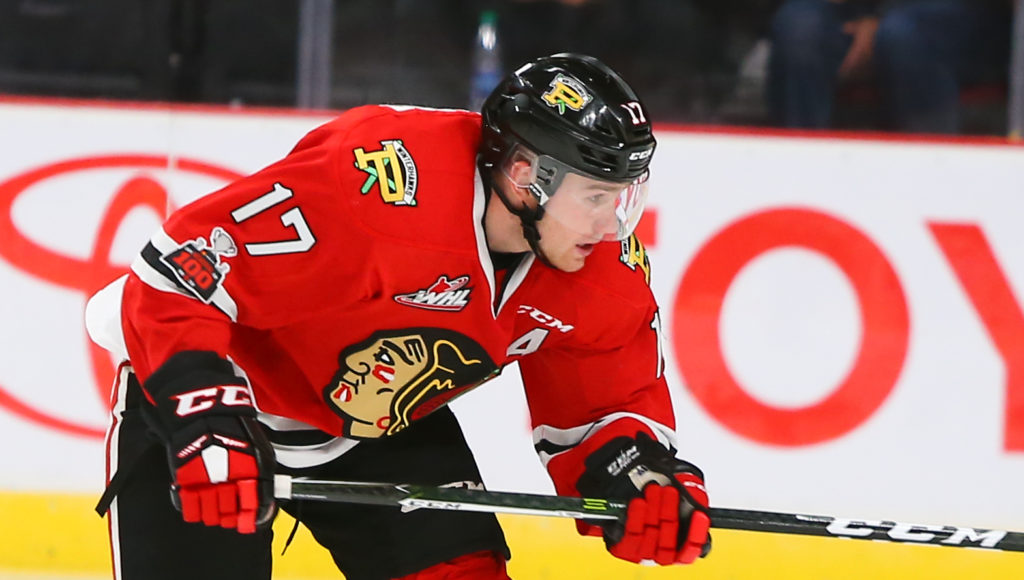 The Winterhawks and Raiders meet up for their lone matchup this season. Portland took down the Raiders 5-3 last year in Prince Albert. The last time the Raiders visited the Moda Center was Oct 13th, 2015, when they came away with a 4-0 shutout win over Portland. The Winterhawks are currently on a four-game winning streak.

PREVIOUS GAME: Joachim Blichfeld scored twice for the Hawks as Portland beat the Tri-City Americans 5-2 in their first meeting of the season.

Goals from Joachim Blichfeld (2), Skyler McKenzie, Keoni Texeira and Kieffer Bellows were enough for the Hawks to knock-off the Americans last night. Cole Kehler was once again solid in net, making 39 saves for his 11th win of the season.

TODAY’S OPPONENT: The Raiders begin their trip through the U.S. tonight in Portland, as their next five games will all be against U.S. Division opponents. Last season, Prince Albert lost all five of their games against U.S. teams. The Raiders are a much-improved squad this year, through 17 games last season they had 10 points, while this season they already have 19.

In net, Toronto Maple Leafs draft-pick Ian Scott has been solid. The 6’4” tender is 5-2-0-0 on the year with a 2.38 GAA and a .926 SV%. He has yet to allow over three goals in any of his starts and has given up just eight goals over his previous four games.

The Raiders sit above .500 on the season but find themselves in 5th place in a vaunted East Division.

WINTERHAWKS TO KEEP AN EYE ON:  After going seven games without a goal, Joachim Blichfeld broke out in a big way last night against Tri-City. The Danish import had two goals and an assist in the Hawks 5-2 win over the Americans. It was only a matter of time for Blichfeld, as he had thrown 31 shots on net in the previous seven games.

While only registering one point last night, defenseman Henri Jokiharju was on the ice for all five of the Winterhawks goals! He leads the team with a +24 rating on the season and continues to impress night in and night out on the Hawks backend.

And of course, we’d be remiss not to mention Kieffer Bellows, who had another multi-point game last night, extending his point streak to 12 games. Bellows now has 12 goals and 22 points over the span.

STAT OF THE DAY: Joachim Blichfeld loves playing on home ice. 10 of his 12 points this season have come in Portland, including four of his five goals.

The Hawks are back in action after tonight next Saturday against the Regina Pats at the Veterans Memorial Coliseum. Tickets are available HERE!

Statement from the Canadian Hockey League
9 hours ago