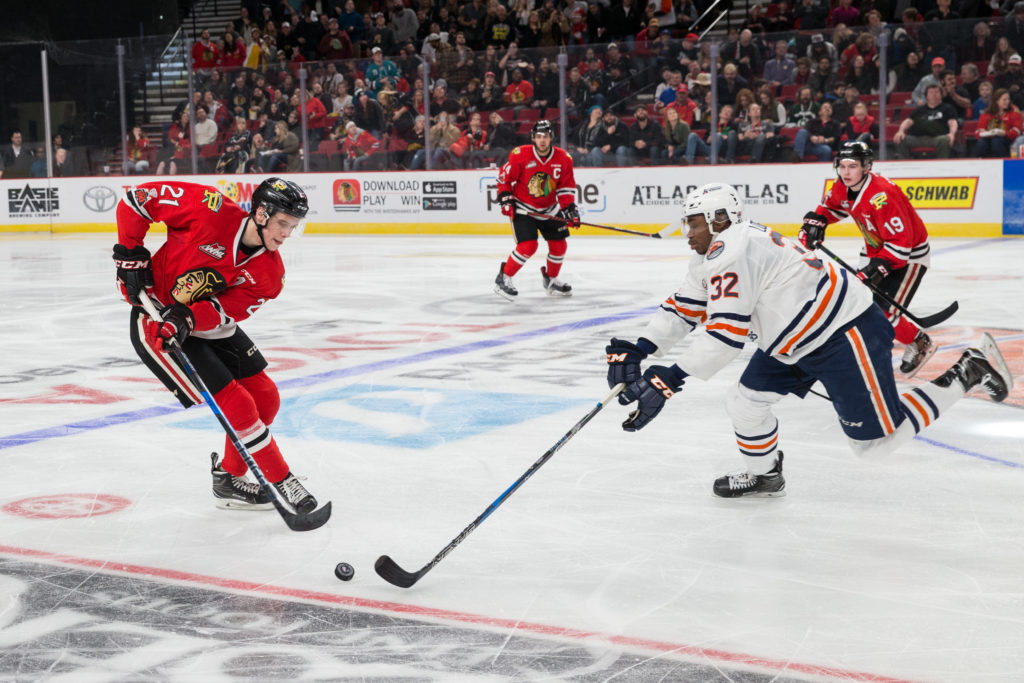 Hockey finally returns to the Rose City after a week without games! The Hawks and Blazers face off tonight for the fourth and final time this regular season tonight at the Moda Center. The Blazers currently lead the season series 2-1-0-0. The home team has won each game thus far.

Tonight is also the night you’ll have a chance to meet hockey legend and former Portland Buckaroos standout, Guyle Fielder. He’ll be signing autographs and his book Guyle Fielder: I Just Wanted to Play Hockey by James Vantour on the concourse.

PREVIOUS GAME: Winterhawks 2 vs. Vancouver 4: Portland outshot the Giants 49-19 but ended up falling 4-2 to Vancouver on Wednesday night at the Veterans Memorial Coliseum.

Vancouver’s Dawson Holt scored early in the first period to give the Giants the 1-0 lead. It remained that way until early in the second, when Reece Newkirk banged home a Lukus MacKenzie rebound to tie things at one. Late in the period, Ryan Hughes converted on the powerplay to give Portland the 2-1 lead after 40.

Portland continued their strong play into the third, heavily out shooting Vancouver. But the Giants took advantage of the few chances they had, with Ty Ronning burying his 50th of the season to tie things at two just past the midway point of the third. Ronning then put the Giants up 3-2, on a wicked wrister from the right circle with under three minutes remaining.

Portland pulled their goaltender and had several chances to tie it but could not solve David Tendeck, who ended up making 47 saves in the game. The Giants ended up putting home an empty-netter to make it a 4-2 final for Vancouver. Cole Kehler made 15 saves in the game.

TODAY’S OPPONENT: The Blazers come into tonight’s game at the Moda Center fighting for their playoff lives. They sit eight points back of the Seattle Thunderbirds for the second wild-card spot but have struggled as of late, losing five straight games. Over that stretch, the Blazers have scored more than two goals in a game just once. They are coming off a 4-0 loss to Everett on Sunday.

19-year old forward Jermaine Loewen has been a force all season long for Kamloops. The 6’4 left-winger has 29 goals and 50 points in 54 games. In three games versus the Hawks, Loewen has two goals and three points. Forward Quinn Benjafield has also had success against Portland this year, registering three goals in three games.

Goaltender Dylan Ferguson has been outstanding against Portland this season. The Vegas Golden Knights prospect is 2-0-0-0 versus the Hawks with a 2.00 GAA and a .939 SV%. His 2.97 GAA on the season ranks fifth in the WHL.

WINTERHAWKS TO KEEP AN EYE ON: Joachim Blichfeld enters tonight with nine points in his last seven games. Over that span the Danish forward has four goals and is now averaging 1.14 points-per-game on the season.

Blichfeld’s linemate Ryan Hughes is also playing exciting hockey. Hughes is on a six-game point streak and has five goals over that span. The entire line of Hughes, Blichfeld and Alex Overhardt has been playing some of their best hockey over the last month.

On the backend, Henri Jokiharju continues to rack up points. The Finnish defenseman is on a five-game point streak and has the third most assists (47) in the WHL among d-men.

STAT OF THE DAY: Of Ryan Hughes’ 26 points this season, 13 have come in the second period.

Portland’s next home game is March 2nd versus the Seattle Thunderbirds. Make sure to grab your tickets HERE!