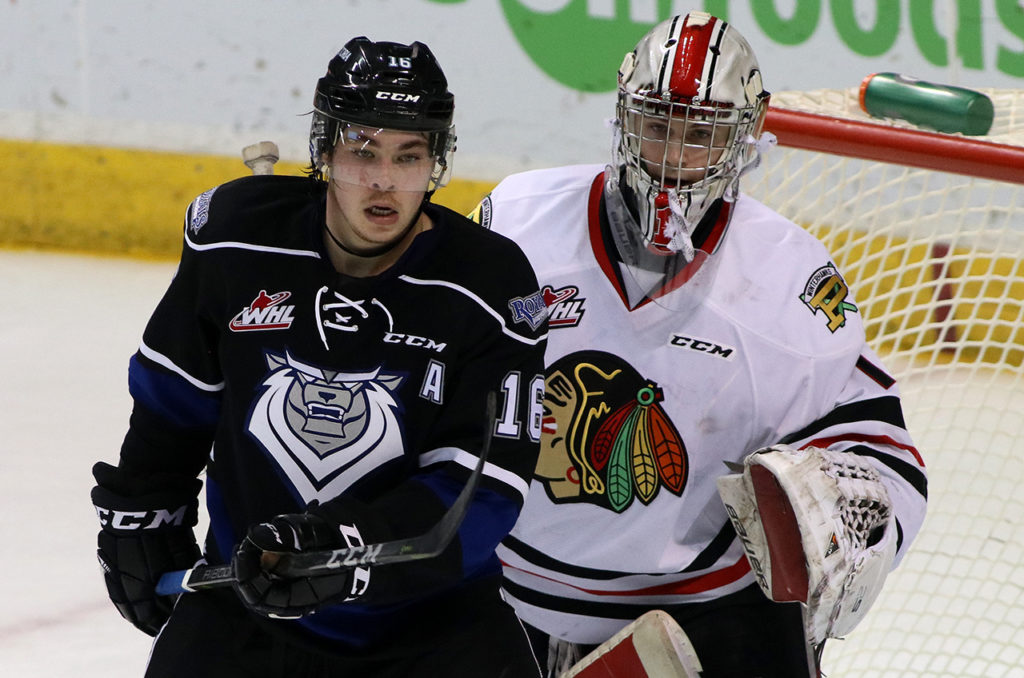 Tonight marks the fourth and final time Victoria and Portland will meet this regular season. The Hawks hold a slight edge in the season series winning two of the first three games. Portland came away victorious last night, right here in Victoria, in a 2-1 win.

PREVIOUS GAME: Winterhawks 2 at Royals 1: Shane Farkas made 29 saves and Kieffer Bellows buried his 30th of the season for the game-winner as the Hawks took down the Royals 2-1 on Friday.

The two teams played to a stalemate after 20 minutes with both goaltenders, Shane Farkas and Griffin Outhouse, coming up with several big saves.

Portland broke through midway through the second, with Alex Overhardt firing home a rebound off a Ryan Hughes shot. Portland then added to their lead with just over a minute to play in the period, when Kieffer Bellows ripped a wrist shot past Outhouse to give Portland a 2-0 lead. Brendan De Jong, who was born and raised in Victoria, picked up an assist on the goal.

In the third, Farkas continued his strong game, stoning the Royals on several occasions in the final frame. The Royals would score late on a powerplay, but that’s as close as they would get as the Hawks held on for the victory. Portland improved to 36-20-1-3 on the season.

TODAY’S OPPONENT: The Royals combined for just one goal last night against the Hawks. Noah Gregor buried his 23rd of the season on a sweet feed from Dante Hannoun. Matthew Phillips picked up the secondary assist to register his 100th point of the season, becoming the first Victoria Royal to reach that mark.

Griffin Outhouse made 35 saves in a solid, but losing effort. On the year now, Outhouse is 1-1-0-0 versus Portland with a 1.93 goals against average and a .943 save percentage.

While he didn’t end up on the scoresheet, Tanner Kaspick was a force last night. He laid several big hits throughout the night and nearly had a shorthanded goal. Kaspick came over from the Wheat Kings at the deadline and has played extremely well for the Royals.

The Royals 21st ranked penalty-kill held the Hawks high-octane powerplay to 0/4 on the night. Victoria will look for a repeat performance on their shorthanded unit this evening.

WINTERHAWKS TO KEEP AN EYE ON: Kieffer Bellows was seemingly snake-bitten over the last handful of games. Having not scored in four games, and hit several crossbars and posts, Bellows finally wired one past Outhouse last night for his 30th of the season. Bellows is averaging 0.68 goals-per-game, which is tied for 9th most in the WHL.

Ryan Hughes picked up a big assist last night on Portland’s first goal. Hughes now has eight points over his last nine games and is second on the Hawks in goals during the month of February with five.

The Hawks remain on the road after tonight. Taking on the Tri-City Americans in Kennewick on Tuesday. The Hawks return to Portland next Friday versus the Seattle Thunderbirds. Grab your tickets HERE!