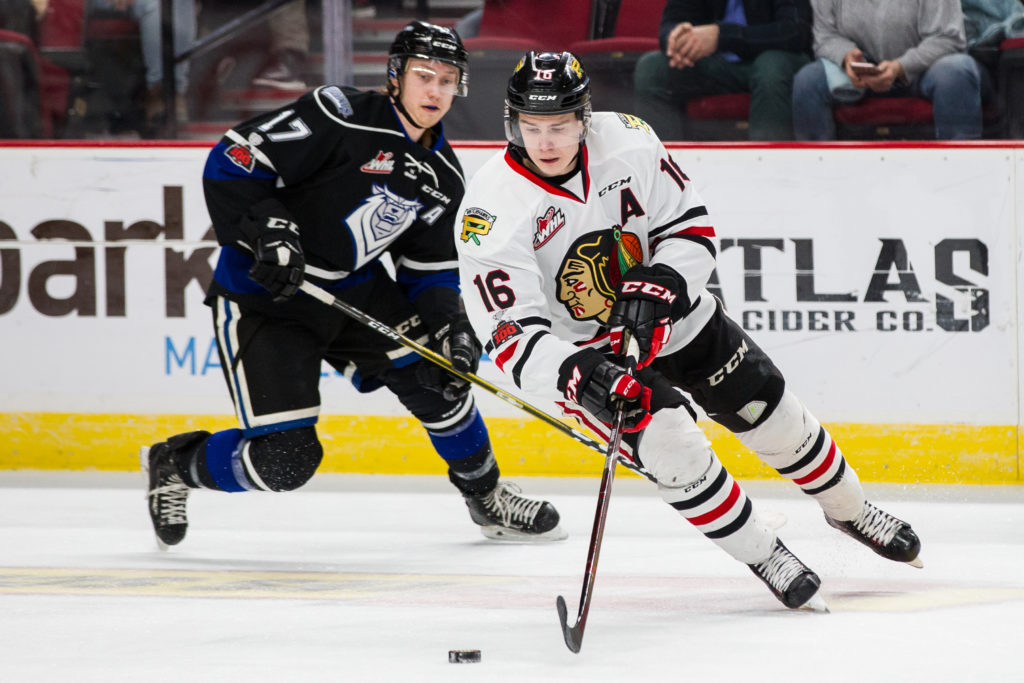 This is the third meeting of the season between Victoria and Portland. Both teams have a win apiece in the season series thus far. It’ll be a back-to-back, this evening and Saturday, to finish off these two teams regular season matchups. The last time these two faced off, it was an 8-5 Winterhawks win in a wild one.

PREVIOUS GAME: Winterhawks 1 vs. Blazers 3: Portland got out to an early lead against Kamloops on Wednesday but it wasn’t enough as the Blazers eventually came away with a 3-1 win over the Hawks.

The Winterhawks were first on the board, with Cody Glass scoring on the powerplay seven minutes into the first period. Skyler McKenzie picked up an assist on the goal, which was his 200th career point as a Winterhawk.

Portland held onto that lead until 4:28 into the second, when Jermaine Loewen fired home the equalizer for Kamloops. The game remained tied until the final two minutes of the period, when the Blazers took advantage of a powerplay to go up 2-1. Then, with just 12 seconds remaining in the second, Kamloops buried another to go up by two.

Portland heavily out-chanced the Blazers in the third, outshooting Kamloops 15 to 4. But goaltender Dylan Ferguson made several big saves to keep his team up. Portland would eventually pulled their goaltender but could not convert, as the Blazers took it 3-1 the final.

TODAY’S OPPONENT: Victoria enters tonight’s contest just three points back of the Kelowna Rockets for first in the B.C. Division. The Royals offense is firing on all cylinders, having not scored less than three goals in a game in nine straight. Victoria also has the best home record in the Western Conference, going 21-6-1-1 at the Save-on-Foods Memorial Centre this season.

Matthew Phillips will look to become the first Victoria Royals’ player to reach 100 points in a season this weekend. The Calgary Flames draft pick is sitting on 99 points this season. He is two points off the all-time franchise mark of 101 points, set by former Chilliwack Bruins forward Mark Santorelli in 2008. Phillips has six points in two games versus Portland this season.

Goaltender Griffin Outhouse has the 4th best save percentage in the WHL at .911. He has won the only game he started against Portland this season, in a 4-2 Royals victory.

WINTERHAWKS TO KEEP AN EYE ON: If the Hawks want to keep pace with the Everett Silvertips, they’ll need to get back into the win column quickly. Portland sits nine points back of the Silvertips for first in the U.S. Division, but the Hawks have played two less games. The Hawks enter tonight with the second-best road record in the WHL, going 18-8-1-1 on the season.

Portland’s third ranked power-play needs to take advantage of a struggling Royals penalty-kill. Victoria has the 21st ranked shorthanded unit in the league, and has allowed seven goals while down a man over their last five games (7/15).

In the Hawks and Royals last game, Henri Jokiharju had four points for Portland. While Glass, McKenzie and Kieffer Bellows all had three-point nights.

STAT OF THE DAY: Cody Glass has 11 points in six games versus Victoria since the beginning of last season.

The Hawks remain on the road for the next two games after this evening. Portland takes on Victoria again tomorrow and then head to Tri-Cities on Tuesday. The Hawks return to Portland next Friday versus the Seattle Thunderbirds. Grab your tickets HERE!