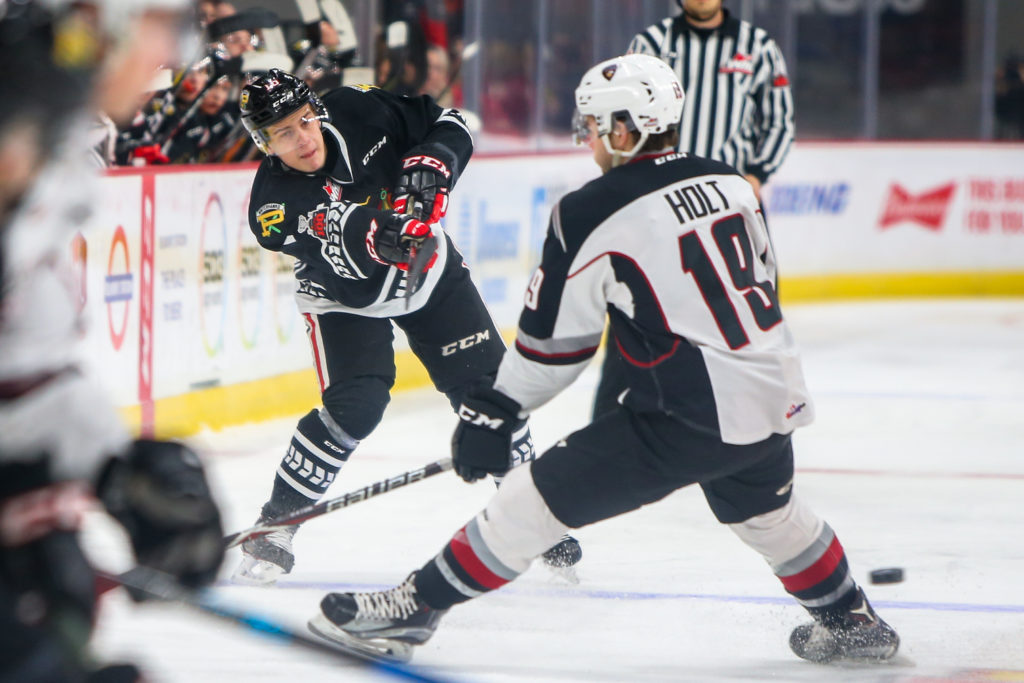 The Hawks and Giants face-off for the third time this season and second time in Langley. Vancouver has gotten the best of Portland in their first two meetings, with goaltender David Tendeck making a 37-save shutout in their last matchup.

PREVIOUS GAME: Winterhawks 3 vs Broncos 5: Portland scored late with an empty-net to make it a one-goal game, but the Broncos held on for the 5-3 win against the Winterhawks.

The Broncos got on the board first on a goal from Giorgio Estephan. Aleksi Heponiemi picked up an assist to extend his point streak to 26 games. Skyler McKenzie tied things up on his 35th of the season to make it 1-1 after 20.

In the second, the Broncos again took the lead, but Portland answered on the powerplay, with Alex Overhardt tipping home a Henri Jokiharju shot. Dennis Cholowski picked up his second assist of the night on the goal, his second straight two-point game.

In the third, the Broncos converted early to go up by one, then again on the powerplay to make it 4-2. Joachim Blichfeld buried his 15th of the year with 2:05 left on the clock and an empty-net to make it a one goal game. The Hawks would press for the equalizer, but Swift Current would add an empty net goal to make it a 5-3 final. Cole Kehler made 21 saves on the night.

TODAY’S OPPONENT: The Vancouver Giants sit third in the B.C. Division in what is tightly contested race for top spot. The Giants are just two points back of Kelowna for first and one point back of Victoria.

Vancouver is 7-0-2-1 over their last 10 games and have been one of the top teams in the WHL over the last two months. Since these two teams last met on Dec 8th in Portland, Vancouver has had just two regulation losses in 15 games.

Leading the way offensively for Vancouver is Ty Ronning. The New York Rangers draft pick has 42 goals and 45 games this year, putting him second in the WHL in goals. The over-age forward has well eclipsed his former career high in goals (31) and has tied his previous career high in points with 59.

Tyler Benson leads all Giants in points against Portland with three in two games. Benson, an Edmonton Oilers prospect, missed the beginning of the season due to injury but has rebounded nicely registering 43 points in 33 games.

David Tendeck has been very solid in-between the pipes for Vancouver. He has a 17-7-1-2 record and has posted a 2.93 GAA and a .910 SV% on the season. Tendeck already has a shutout against Portland this year, a 37-save effort back on December 8th in the Rose City.

WINTERHAWKS TO KEEP AN EYE ON: Dennis Cholowski enters tonight’s game with back-to-back two point games and six points in his first five contests as a Hawk. The Langley, BC born d-man has 13 multi-point games this year and is T-5th in the WHL in scoring among defenseman.

Joachim Blichfeld leads all Winterhawks players in points against Vancouver with two in two games. Blichfeld has a two-point effort last night against Swift Current and now has 36 points in 31 games on the year. Blichfeld is one of seven Winterhawks who are averaging over a point-per-game.

Skyler McKenzie picked another goal last night, extending his goal streak to four games and he now has 15 goals in his last 14 games. His 35 markers on the season make him tied for fourth in the Western Hockey League.

With Cody Glass missing yesterday’s game, Alex Overhardt took over the #1 center positon for Portland. The Colorado-native picked up his 11th goal of the season on the PP and is now just six points away from 100 career points and two games away from 250 career games.

Portland returns home on Sunday for a matchup with the Brandon Wheat Kings at the Moda Center. Make sure to grab your tickets HERE!