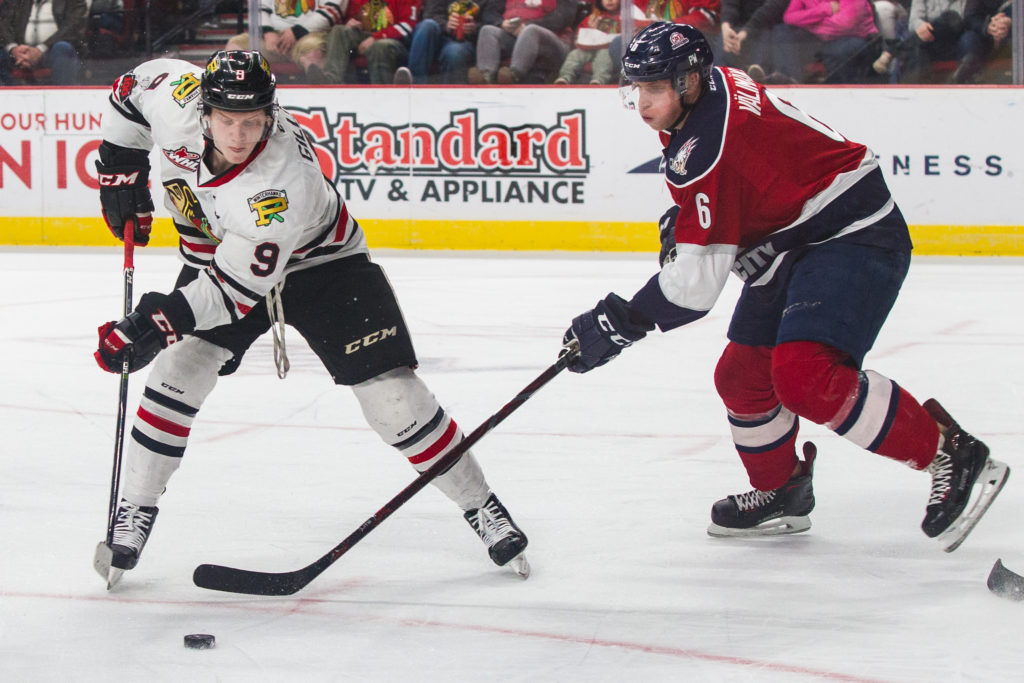 The Hawks enter tonight’s game against Tri-City with wins in two straight and seven of their last ten. It’s the eighth time this season that the Americans and Winterhawks have faced off. Portland currently leads the season series 5-2-0-0 over Tri-City. The Hawks have won two of the three games in Kennewick this season.

PREVIOUS GAME: Winterhawks 3 at Royals 2: Cody Glass scored with just over four minutes remaining in the third period to lead Portland a 3-2 victory over the Royals on Saturday. With the win, Portland clinched a playoff spot for the ninth straight season.

Kieffer Bellows got the Hawks on the board first 3:50 into the opening frame. Dennis Cholowski floated a point shot on net, Royals netminder Griffin Outhouse couldn’t grab it, and Bellows buried the rebound. The Royals would respond late in the period on the powerplay, as Noah Gregor fired one past Shane Farkas to tie things at one.

In the second, the Hawks again took the lead when Bellows ripped a wrister past Outhouse. For Bellows, it was his 32nd of the season. The Royals responded, again on the powerplay, with Gregor picking up his second of the game to knot things at two.

In the third, both teams had opportunities to go up, but both Farkas and Outhouse held strong for their respective teams. The Hawks finally broke through late in the period, when Glass put home a sweet feed from Henri Jokiharju on the powerplay to give Portland a 3-2 lead. The Royals would pull their goaltender but to no avail, as Portland would hold on for the win.

Shane Farkas made 21 saves in the victory.

TODAY’S OPPONENT: The Americans enter tonight’s game with wins in three straight games. Tri-City is in the middle of a six game homestand and have won seven of their last eight games on home ice. The Americans are still very much in striking distance of Portland, sitting six points behind Portland with both teams having 11 games to go.

Defenseman Juuso Valimaki has been on a roll lately, scoring four goals in his last three games. For the month of February, Valimaki is tied with Jordan Topping and Michael Rasmussen for the team lead with 12 points in 12 games.

Against Portland this season, rookie forward Isaac Johnson has five goals, which is nearly one-third of his goal total on the season (16). Morgan Geekie has seven points in six games versus the Hawks.

The Royals have three high-scoring d-men on their backend in Valimaki, Dylan Coghlan and Jake BEAN. Coghlan has 58 points this season, third highest on the team, while Bean is just under a point-per-game player registering 39 points in 46 games. Bean hasn’t quite scored as much as he was in Calgary, putting up just 12 points in 21 games with Tri-City.

WINTERHAWKS TO KEEP AN EYE ON: Kieffer Bellows has three goals in his last three games and has dominated the Americans this season. In five games, the Islanders first-round pick has six goals and eight points. Bellows leads all Portland players in multi-goal games this season with ten.

Defenseman Matthew Quigley has also put up a surprising amount of points against the Ams. Quigley has registered six of 19 points this season versus Tri-City. Forward Lukus MacKenzie has had his best offensive outputs against the Americans this year, putting up one goal and three assists in five games.

The Hawks return to Portland this Friday to take on the Seattle Thunderbirds. Grab your tickets HERE!