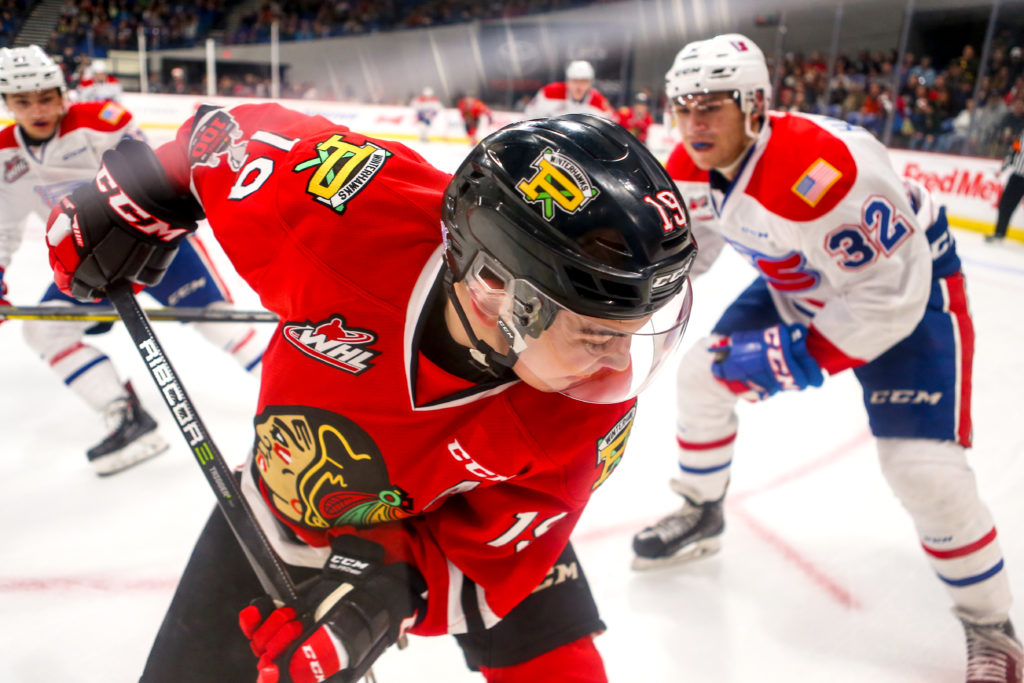 This will be the last time Portland visits Spokane this season. The Winterhawks have had plenty of success so far this year on the road against the Chiefs, going 3-0-0-0. The previous meeting between these squads resulted in a 6-3 Spokane win at the Veterans Memorial Coliseum.

PREVIOUS GAME RECAP – PORTLAND 3 vs. SEATTLE 4 (SO): The Winterhawks scored late in the third to tie things up with Seattle but the Thunderbirds eventually came away with the victory in a shootout. For Portland, it was their third straight game with a point.

After 20, the game was scoreless but that changed when Skyler McKenzie wired one home from just inside the right circle to give the Winterhawks a 1-0 leads 2:22 into the second. Seattle would score twice to take the lead but the Hawks responded with a goal from Reece Newkirk on a great feed from John Ludvig.

Seattle took a 3-2 lead late in the third, but again the Winterhawks came back. With just 58 seconds remaining Ryan Hughes scored for Portland to tie things up in front of a frenzied Moda Center.

After a scoreless overtime frame, Portland was unable to beat Seattle goaltender Liam Hughes and the Thunderbirds came away with the victory. Cole Kehler made 27 saves on the night.

TODAY’S OPPONENT: Spokane enter tonight’s game against the Hawks in 4th place in the U.S. Division, just two points ahead of Seattle but also just two points back of Tri-City for third. The last time these two teams got together was December 16th, where Portland got out to a quick 2-0 lead, but Spokane eventually took it 6-3.

LA Kings draft pick Jaret Anderson-Dolan had two goals in that game, his 19 markers on the season are tied for first on the Chiefs. His three goals and five points against Portland this season also lead Spokane.

Thirty-percent of Eli Zummack’s 10 goals this year have come against Portland. The 17-year old forward had a pair of goals against the Hawks in their last meeting and was named the first star.

Goaltender Donovan Buskey might have been the difference in these two teams last meeting. Buskey made 37 saves in the win, but has struggled since that game, giving up 14 goals over his last three starts. Goaltending in general has been an issue for Spokane recently, they’ve given up 3-or-more goals in seven straight games.

WINTERHAWKS TO KEEP AN EYE ON: Skyler McKenzie enters tonight’s game with goals in three straight and seven in his last six contests. The Winnipeg Jets draft pick also leads all Hawks in scoring against Spokane this season with four goals and 11 points in six games.

Forward Ryan Hughes looks to be returning to form. After registering just one point in his first three games back from injury, Hughes has four points over his last three contests. In the Hawks last game against Seattle, Hughes scored the game-tying goal with just 58 seconds remaining in regulation.

Another Portland player who enters today on a streak is Brendan De Jong. De Jong comes into tonight’s contest with points in four straight and seven assists over that span. With Keoni Texeira and Henri Jokiharju not currently in the lineup, De Jong has taken over as powerplay quarterback and has looked right at home.

Portland has two more games after tonight on the road before they return home on January 13th to take on the Seattle Thunderbirds. Make sure to grab your tickets HERE!