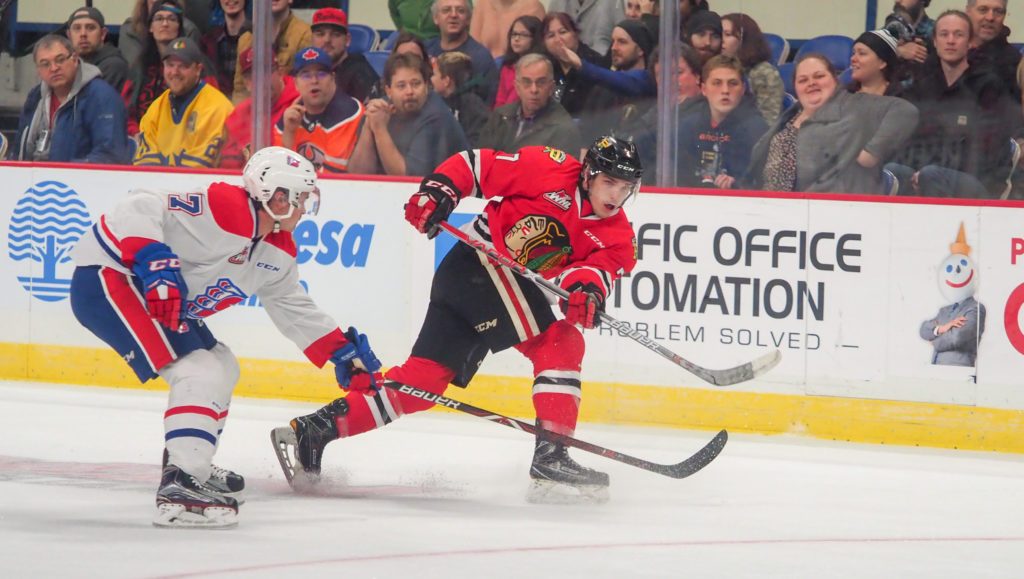 The Winterhawks take on the Spokane Chiefs for the fifth time this season on Tuesday. Portland leads the season series 4-0 so far. The Winterhawks have outshot the Chiefs 20-3 over those four games. Portland enters the game first in the U.S. Division with a record of 20-9-0-1.

After a scoreless first period, Everett got on the board twice in the second to take a 2-0 lead. Winterhawks defenseman John Ludvig and Everett D-man Montana Onyebuchi had a spirited scrap shortly after the goals that brought the nearly sold out Veterans Memorial Coliseum to it’s feet.

In the third, Portland finally broke through with Ludvig picking up his second of the season and bears came raining down. It was just the fourth time in Portland’s Teddy Bear Toss history that the goal was scored by a defenseman.

Portland heavily outplayed Everett for the remainder of the game, outshooting the Silvertips 20-4 in the period. But Silvertips goaltender Carter Hart stood tall and held off Portland’s late push. The Silvertips would take it 2-1.

TODAY’S OPPONENT: The Spokane Chiefs enter tonight’s game with the Hawks in 3rd place in the U.S. Division. The Chiefs are coming off a 9-2 shellacking of the Seattle Thunderbirds on Saturday. Slovakian import Milos Fafrak had a hat-trick in the game and a total of five players had multi-point nights.

This will be the first time the Winterhawks will face Spokane with Kailer Yamamoto in the Chiefs lineup. The Edmonton Oilers first round draft pick has 10 points in 12 games since returning from the NHL, but just one goal. Yamamoto led the Chiefs in scoring last season with 99 points. Much like Kieffer Bellows of the Winterhawks, this will likely be Yamamoto’s last game before he departs for Team USA’s training camp for the 2018 World Junior Championship.

Highly touted defenseman Ty Smith continues to see his draft stock rise. Smith has had a fantastic start to the season for the Chiefs, registering 29 points in 30 games. The former first overall pick of the Chiefs, is expected to be a top 10 pick in the 2018 NHL Entry draft.

Hudson Elynuik, the Carolina Hurricanes draft pick, leads Spokane in scoring with 14 goals and 39 points on the season.

With Cody Glass departing for Team Canada’s World Junior camp, keep an eye on who moves up in the lineup. Will Alex Overhardt find himself between Bellows and McKenzie? Or will McKenzie slot into the middle, with Blichfeld moving up into the top unit? The line configurations for tonight’s game should be very interesting.

One last note, Portland called up highly touted prospects’ Seth Jarvis, Connor Bowie, and Jaydon Dureau on Monday in anticipation of the departures of Bellows, Blichfeld and Jokiharju to their respective countries’ World Junior camps. While it’s unlikely you will see any of the three Winterhawks prospects tonight, the expectation is Winterhawks fans may see a couple of “first WHL games” this upcoming Saturday at the VMC.

The Winterhawks return home on Saturday to take on the Chiefs, this time at the Veterans Memorial Coliseum. Make sure to grab your tickets HERE!