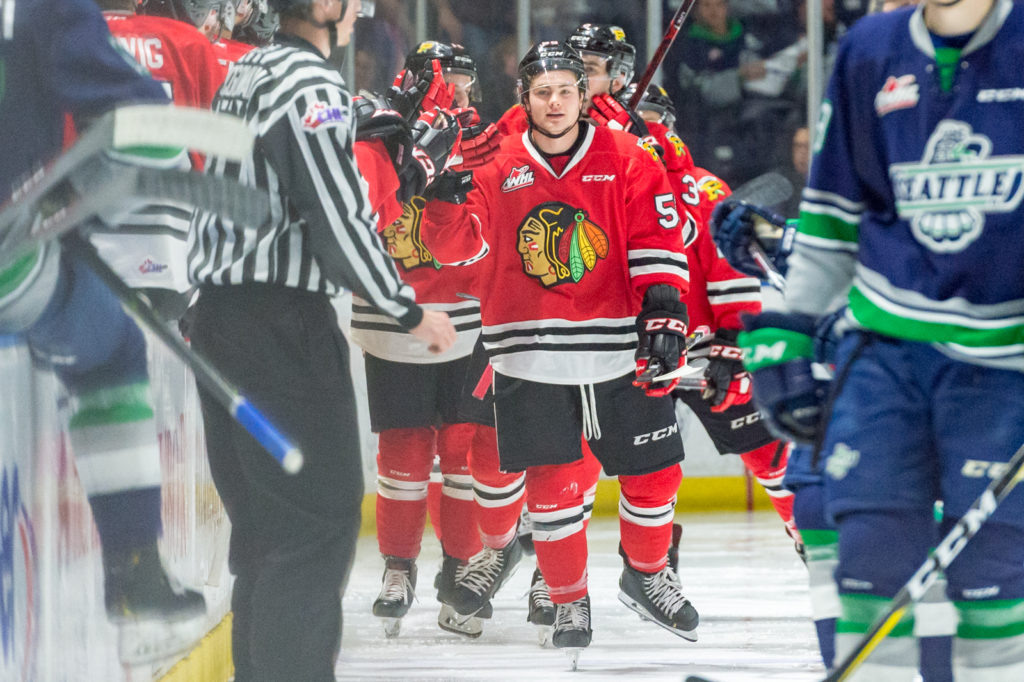 The Portland Winterhawks play their final two games against Seattle as they look to clinch home-ice advantage in the first round of playoffs with a win Saturday or Sunday. This weekend is a home-and-home match-up against the Thunderbirds to close the chapter on the regular season.

PREVIOUS GAME – Winterhawks 4 vs. Silvertips 1: After a hard-fought game, the Hawks tacked on four goals to beat Everett 4-1 in their final head-to-head meeting of the season. The win marks the third straight year 40-win regular season for Portland.

The Winterhawks scored less than five minutes into the second period on an offensive zone takeaway. Reece Newkirk forced in his 22nd goal of the season to give the Hawks a 1-0 lead after 40 minutes. Joel Hofer denied 29 straight shots to take the game into the second intermission break and Portland came out firing in the third frame.

Five minutes into the third, the Hawks set up a face-off play to perfection and one-timed in a shot from the slot to take a 2-0 lead. That score would remain until the final 2:30 when Everett spoiled Joel Hofer’s shutout with an extra attacker.

Everett never had a chance to get back in the game as Portland buried two quick empty net goals to seal the victory. The Hawks won three of their four home games against Everett this year and they turn their attention to Seattle for a pair of weekend games.

With both teams heading into the playoffs, this is an important weekend for momentum at the biggest time of the year. After the Friday night games in the Western Hockey League, the Vancouver Giants claimed the Western Conference Championship over Everett. Because of that, the Thunderbirds know they will compete in the B.C. Division bracket as the second place Wild Card team. They play round one against the Giants starting next weekend.

Portland enters the game after beating Everett earlier this week and are now just one win or one Spokane loss away from locking in second place in the division. The Hawks have seven straight wins against the T-Birds, but Seattle has played well recently, going 4-1-0-0 in their last five games with the lone loss coming against Vancouver.

The last time these two teams played at the ShoWare Center, Portland erased a 3-0 deficit 10 minutes into the game and won 4-3 in the shootout. Clay Hanus was one of the reasons for the comeback and half of his career goals have come against Seattle.

Expect the weekend games to have an offensive upside. Head-to-head, the team combined for seven or more goals seven times out of the ten previous meetings. One way Portland can take advantage is on special teams. Seattle commits the most penalties in the league and they have a bottom three penalty kill. On the season, the Hawks are 14/46 (30.4%) on the man advantage against the Thunderbirds.

Catch up on a lunch-time read as Josh Critzer of DubNetwork chats with Brendan De Jong and Seattle captain Nolan Volcan on this rivalry: click here to read.

One thing we do know is the atmosphere in both rinks will be electric and both venues are approaching a sell-out.

The weekend games will be televised on Portland’s CW and Sunday’s home game will start at 5:00 p.m. at Veterans Memorial Coliseum to conclude the 68-game regular season schedule. Be sure to arrive to the game early tomorrow and get in your seats for the annual Winterhawk awards. Please visit winterhawks.com/tickets for full details on pricing and availability.