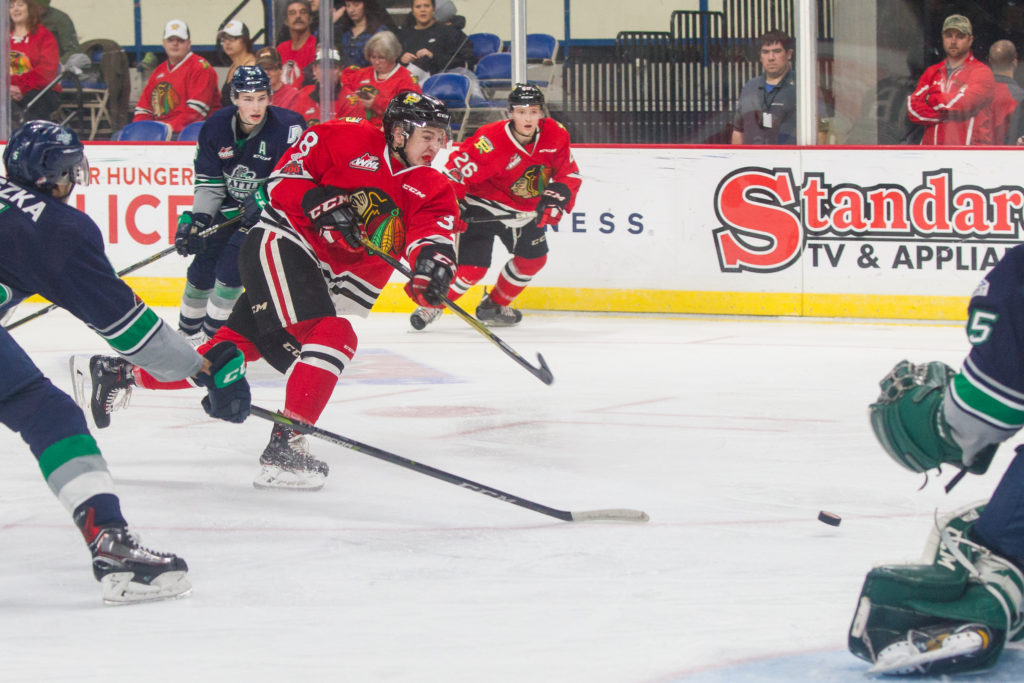 The Hawks enter tonight’s contest versus the Thunderbirds with three straight wins and have taken five of their last six. This is the seventh meeting of the season between Portland and Seattle, the Hawks lead the season series 4-0-1-1 and are 2-0-1-0 in Seattle this year.

PREVIOUS GAME: Winterhawks 3 vs. Americans 1: Shane Farkas made 32 saves to lead Portland to a 3-1 victory over the Tri-City Americans on Friday night.

It was the Americans who got on the board first. Jordan Topping put one past Farkas late in the first period to give Tri-City a 1-0 lead after 20 minutes.

In the second, Portland quickly tied things up. Lukus MacKenzie and Mason Mannek worked the puck back to the blueline, where Dennis Cholowski floated one past Patrick Dea tie things at one. For Cholowski, it was his first goal in a Winterhawks jersey. Just over a minute later, Ryan Hughes fed Joachim Blichfeld in-between the hash marks, Blichfeld then turned and fired it home for his 18th of the season.

Portland held onto a one goal lead until late in to the third period, when the Hawks finally added some insurance. Henri Jokiharju sprung Kieffer Bellows on a breakaway, who then put a backhand shelf on Dea to give Portland a 3-1 lead.

Shane Farkas continued his stellar night, eventually making 32 saves and picking up his fifth win in his last six starts. The Hawks improved to 33-18-1-3 with the victory.

TODAY’S OPPONENT: The Thunderbirds come into tonight after losing in overtime to the Giants on Friday. Extra-time has been a common theme for Seattle recently, especially at home. The Thunderbirds have gone into extra-time in five straight home games and three straight games overall.

Leading the way offensively for Seattle is Donovan Neuls. The over-age forward is one of three Thunderbirds averaging over a point-per-game; Neuls has 57 points in 53 games this season.

19-year old Zach Andrusiak has had a phenomenal season for Seattle. The Yorkton, Saskatewan product has 54 points in 53 games and in six games against the Hawks this season he has five points.

WINTERHAWKS TO KEEP AN EYE ON: Kieffer Bellows has eight goals and 18 points during his nine game-point streak. Bellows scored last night late in the third period on a breakaway goal against Tri-Cities’ Patrick Dea to give Portland a 3-1 lead.

Mason Mannek picked up an assist last night in the Hawks win. He was buzzing all over the ice and now has points in two straight. His nine goals are tied for the 9th most in the WHL among rookies.

Joachim Blichfeld buried his 18th of the season last night. He has goals in two straight games and points in four straight. The Danish forward has 13 points in 12 games since returning from the World Junior Championship.

STAT OF THE DAY: Portland is now 18-8-1-2 against the U.S. Division, which is the best record any U.S. team has within their division.

Portland’s next home game is Sunday’s Jack in the Box Day Light Classic against the Seattle Thunderbirds! Make sure to grab your tickets HERE!