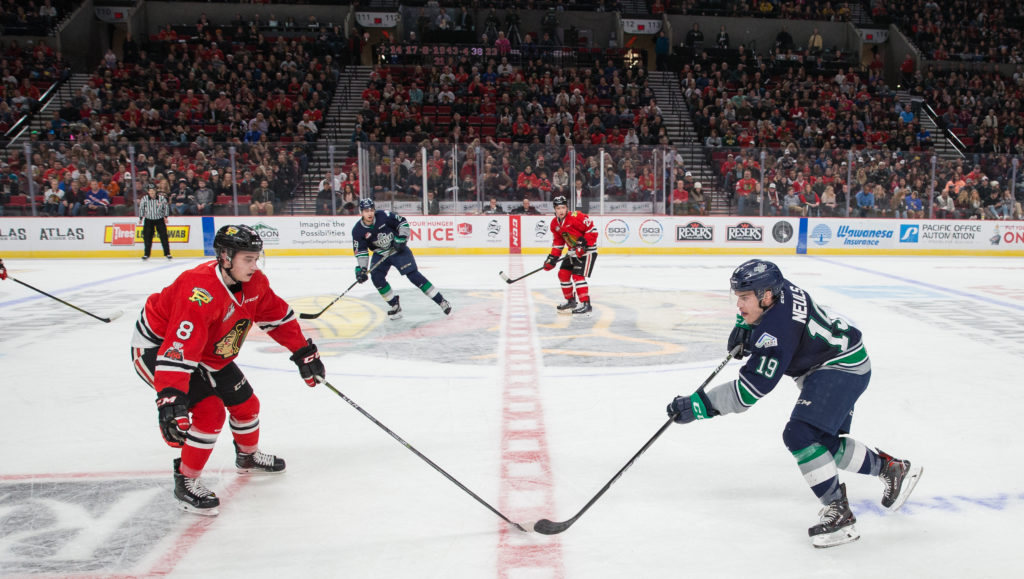 The Hawks and Thunderbirds faceoff for the fifth time this season tonight in Kent. Portland and Seattle have each won two games so far this season, with their previous two matchups both going into extra-time.

PREVIOUS GAME RECAP -PORTLAND 4 at EVERETT 3: Jake Gricius picked up his second goal of the night with just 38 seconds remaining in regulation to give the Winterhawks a 4-3 win over Everett.

The Hawks got on the board first with a goal from Jake Gricius, with Mason Mannek picking up the assists. Ryan Hughes would then put the Hawks up 2-0 just 17 seconds later and Portland would take that lead into the intermission.

Just 1:39 into the 2nd period, Ilijah Colina potted his third of the season to give Portland a 3-0 advantage. Everett would respond though, scoring twice on the power play to make it a 3-2 game after 40.

In the third, Everett would tie things up, again on the man-advantage to make it a 3-3 contest. After Cody Glass struck iron on a shorthanded breakaway, the game remaining tied in the closing minutes. With just 38 seconds remaining, Jake Gricius scored while laying on the ice after being knocked down to give Portland the 4-3 lead. Despite Everett pulling their goalie, the Hawks would hold on for the win.

TODAY’S OPPONENT: The Thunderbirds enter tonight’s contest as one of the hottest teams in the WHL, winning five-straight and seven of their last eight games. Seattle hasn’t played since Saturday when they took down the Spokane Chiefs in a 4-1 win.

Seattle forward Donovan Neuls has been on fire as of late for the Thunderbirds, with four goals and seven points in his last three games. Sami Moilanen returned from injury on Friday night for Seattle and pick up an assist in his return. Moilanen was injured in Team Finland’s World Junior selection camp and missed just under a month of time. He has 27 points in 30 games this season.

Jarret Tyszka leads all Thunderbirds in points against Portland this season with five in four games. The Montreal Canadiens draft pick picked up the OT winner the last time Portland was in Seattle in a 4-3 Thunderbirds win. Austin Strand, Seattle’s leading scorer from the backend, has two goals against the Winterhawks this year and has been a constant threat on the powerplay for the Thunderbirds.

WINTERHAWKS TO KEEP AN EYE ON: The Hawks line of Alex Overhardt, Mason Mannek and Jake Gricius had themselves a big night on Saturday against Everett. Both Mannek and Gricius had three point nights, while Overhardt was a force all over the ice and picked up an assist, extending his point streak to five games. Keep an eye on whether this line remains intact tonight in Seattle and if they enjoy an encore performance.

Skyler McKenzie has loved playing Seattle this season. The 19-year old forward has six goals and eight points against the Thunderbirds in four games. McKenzie has been on a tear lately, scoring in six of his last eight games.

Ryan Hughes enters tonight on a five-game point streak and has two goals in his last three games. In total, Hughes has 19 points in his last 16 games against Seattle over the last two seasons.

STAT OF THE DAY: Oddly enough, the Winterhawks are 7-3-0-0 this season when they have been out-shot by an opponent.

Portland has one more game after tonight on the road before they return home on January 13th to take on the Seattle Thunderbirds. Make sure to grab your tickets HERE!