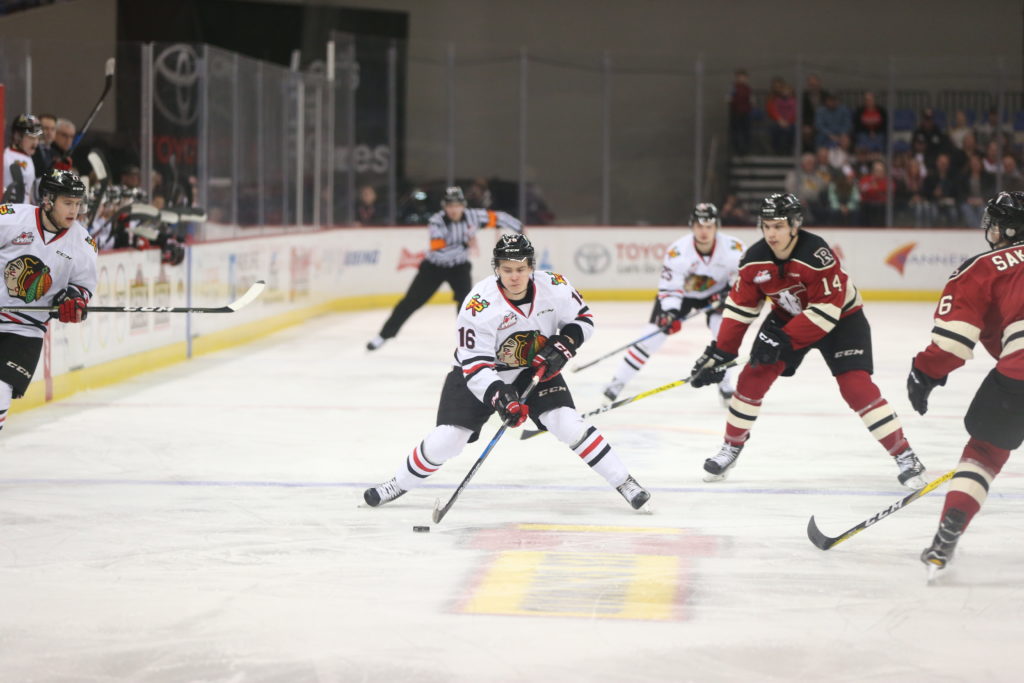 The Hawks take on Red Deer tonight for their lone matchup with the Rebels this season. Portland enters the game on an eight-game winning streak and have not lost in the month of November. The Winterhawks are currently first in the U.S. Division, six points ahead of the Tri-City Americans.

PREVIOUS GAME: Winterhawks 7 at Calgary 3: The Portland Winterhawks came away with a 7-3 win against the Calgary Hitmen on Wednesday. It was Portland’s eighth straight win.

The Winterhawks (17-4-0-0) came out strong with three goals in the first period. Kieffer Bellows potted his first of the night, 4:29 into the period. Then, Jake Gricuis gave the Hawks a two-goal advantage, with Brad Ginnell and Lane Gilliss picking up assists. Bellows would net his 17th goal of the season late in the frame, to give the Hawks a 3-0 lead after 20.

Cody Glass started out the second period with a goal at the 5:42 mark to give the Hawks a 4-0 advantage. The Hitmen (6-14-3-1) would respond with two goals in the second to make it a 4-2 game. But the Hawks would respond with three goals in 2 minutes and 41 seconds. Skyler Mckenzie, Bronson Sharp and Joachim Blichfeld all scored in the latter half of the 2nd period to give the Hawks a 7-2 lead.

Calgary would get one more on the board in the third to make it a 7-3 final for Portland. Goaltender Cole Kehler made 23 saves on the win. The Winterhawks improved to 17-4-0-0 on the season.

TODAY’S OPPONENT:  It’S been a struggle as of late for the Red Deer Rebels. The team currently situated 4th in the Central Division has lost three straight and have just one win in their last 10 games. During those 10 games, Red Deer has averaged 2.40 goals-for and 3.90 goals-against.

But despite that, the Rebels are just two points out of 2nd place in the Central Division. Upfront Red Deer is led by over-ager Mason McCarty. The Alberta-born forward has 22 points in 23 games to lead all Rebels. Forward Kristian Reichel, who attended Winnipeg Jets camp earlier this season, has 10 goals and 20 points and has goals in four of his last six games.

On the backend, Russian d-man Alexander Alexeyev leads all Rebels defenders with 12 points on the season. He was recently given an “A” rating from NHL Central Scouting, meaning he is a candidate to be drafted in the first round on next year’s NHL Entry Draft.

In net, 17-year old Ethan Anders has made the majority of starts for Red Deer this season. He is 4-11-0-0 on the year and has lost his last seven starts. He has allowed exactly three goals against in eight of his last nine starts.

The Winterhawks defeated the Rebels 4-3 last year in Portland but lost 4-3 in overtime in their last visit to Red Deer during the 2015-16 season.

WINTERHAWKS TO KEEP AN EYE ON: Skyler McKenzie enters tonight’s game with goals in six straight. It’s the longest goal scoring streak of his career. On the season, McKenzie has 19 goals, good for 6th most in the WHL.

Henri Jokiharju has four multi-point games over his last seven efforts. The Finnish D-man now has 28 points on the season, putting him in a tie for 2nd in the league among defenseman in points.

Another defenseman who has looked good as of late is Brendan De Jong. The Carolina Hurricanes draft pick has been solid defensively as of late, and has chipped in offensively with two points in his last four games. He picked up his first goal of the season on a wicked slapshot in Kootenay on Tuesday.

Cody Glass is on an eight-game point streak and has 17 points over that span. Over the first two games of this six-game road trip, Glass has one goal and five assists.

Finally, tonight is career game #300 for Winterhawks captain Keoni Texeira. He will be just the 8th player in Winterhawks franchise history to reach that mark.

STAT OF THE DAY: Last year it took Skyler McKenzie 32 games to reach 19 goals, this year he’s done so in just 21 games.

The Hawks are on the road for their next four games as part of their season long Central Division swing. You can catch all the action at Winterhawks.com/listen or on the Winterhawks App. Portland returns home on Sunday, December 3rd against the Saskatoon Blades at the Moda Center. Get your tickets HERE!