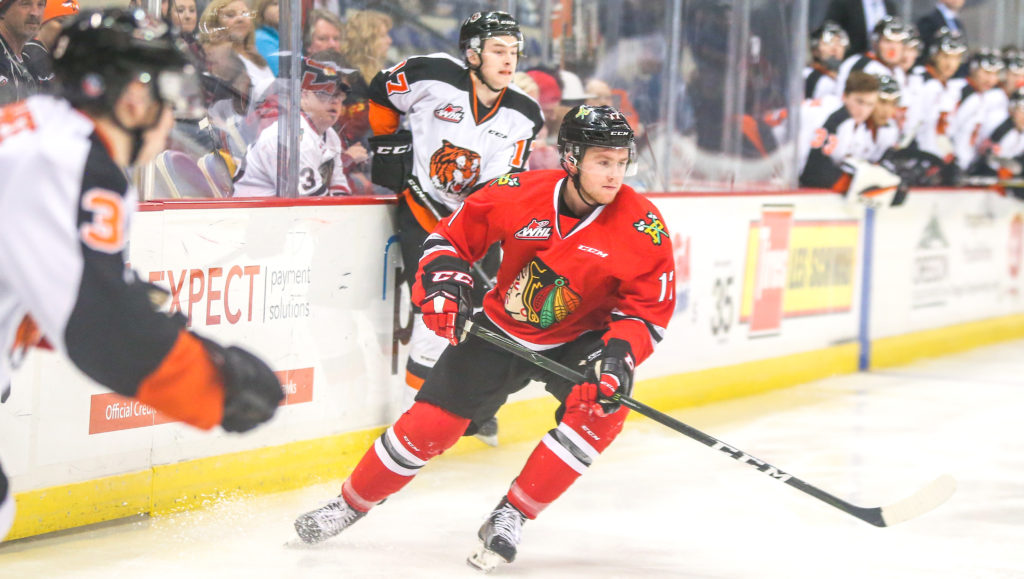 The Winterhawks visit the Medicine Hat Tigers for their final game of their Central Division road trip. The Hawks are coming off a 4-3 shootout defeat at the hands of the Lethbridge Hurricanes last night. Portland has points in 11 straight games and sit atop the U.S. Division.

PREVIOUS GAME: Winterhawks 3 at Hurricanes 4 (SO): Cody Glass extended his point streak to 11 games but the Winterhawks fell to the Lethbridge Hurricanes 4-3 in a shootout.

The first period was scoreless, but the Winterhawks (19-4-0-1) got on the board in the second with a power play goal from Ilijah Colina at the 2:12 mark. The Hawks would continue to take advantage of the power play, with another goal from Henri Jokiharju to make it 2-0. Lethbridge (11-12-1-0) responded with a goal of their own to make it 2-1 at the end of the second period.

Cody Glass scored 5:17 into the third to give Portland a 3-1 lead. For Glass, it was his 11th straight game with a point. But Lethbridge would comeback, scoring twice on 5-0n-3 man advantages to tie things up. The game would remain tied all the way through overtime to set up a shootout.

Joachim Blichfeld scored for Portland in the second round of the shootout but Lethbridge eventually topped the Hawks with Zane Franklin scoring in the seventh round to give the Hurricanes the win.

TODAY’S OPPONENT: The Medicine Hat Tigers enter tonight’s contest with the Hawks sitting atop the Central Division standings. The Tigers have been strong on home-ice this season, posting a 10-3-0-0 record. Medicine Hat has lost two in a row but are 7-3-0-0 over their last 10 games.

Tigers forward Mark Rassell has been a force to be reckoned with this year. The 6’1” over-ager has 24 goals in 24 games, good for 4th in the WHL. The rest of the Tigers offense has been very balanced with seven players scoring seven-or-more goals on the season.

Defensively, the team is led by New York Islanders draft pick David Quenneville. The Tigers d-man has 27 points on the year, which is 4th among all defenseman in the WHL. Swedish import Linus Nassen has also contributed offensively from the backend, posting 15 points in 24 games.

Portland fans should recognize one of the faces in the Medicine Hat net. Former Winterhawks goaltender Michael Bullion has had an up-and-down season. Bullion started the year strong allowing just 15 goals in his first six games, but has given up 24 goals over his previous six contests. He has been splitting time with Jordan Hollett, who is 9-4-0-0 on the year with a 3.28 goals against average.

WINTERHAWKS TO KEEP AN EYE ON: Cody Glass enters tonight’s game with goals in four straight, a new career high. He also is on an 11-game point streak, and sits T-6th in the WHL in points with 45.

Henri Jokiharju has been on a roll as of late. The Finnish defenseman has five straight multi-point games. He’s currently on an eight-game point streak and has 14 points during that stretch.

Last year against Medicine Hat, the Winterhawks won 5-3 in Portland. In that game, Skyler McKenzie had three points to lead all Hawks offensively.

STAT OF THE DAY: Portland has won five straight meetings with Medicine Hat. The last time the Tigers beat the Winterhawks was Oct 26th, 2011 in Medicine Hat.

This is the Hawks final game of their season long Central Division road trip. You can catch all the action at Winterhawks.com/listen or on the Winterhawks App. Portland returns home on Sunday, December 3rd against the Saskatoon Blades at the Moda Center. Get your tickets HERE!