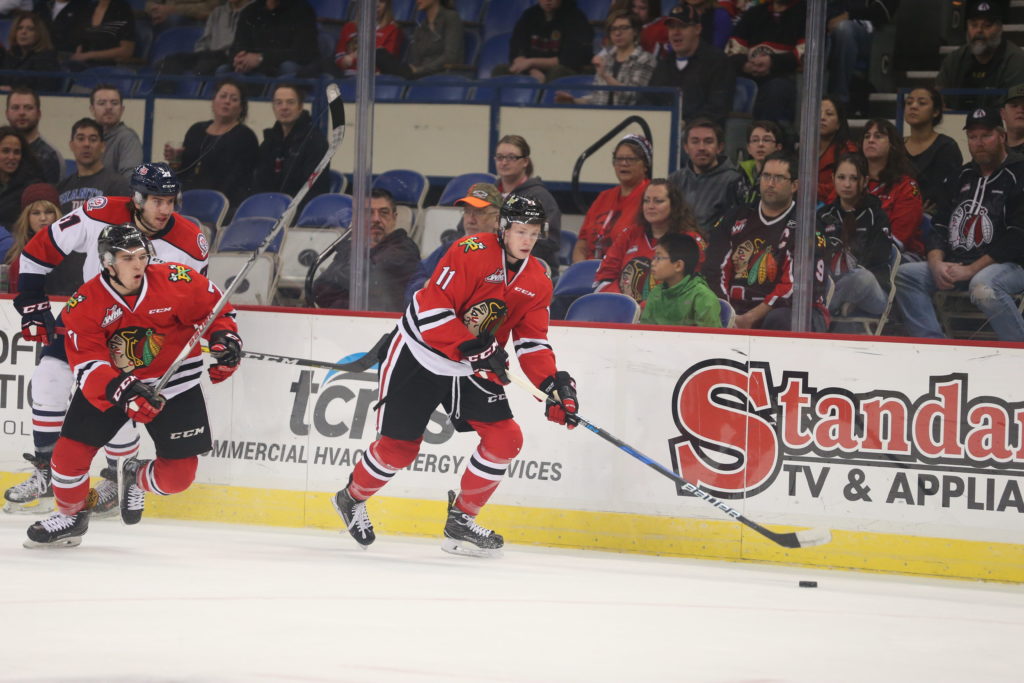 Portland takes on the Lethbridge Hurricanes tonight in their second last game of the Hawks Central Division road trip. So far, Portland has won all four games on the Central Swing and have won 10 straight overall. They sit first in the U.S. Division and are the top team in the Western Conference.

PREVIOUS GAME: Winterhawks 3 at Edmonton 0: The Portland Winterhawks won their 10th straight game against the Edmonton Oil Kings in a 3-0 shutout from Cole Kehler.

The first period was scoreless but the Winterhawks (19-4-0-0) took advantage of power plays in the second period. Cody Glass potted the first goal of the night, 2:50 into the second with assists from Henri Jokiharju and goaltender Cole Kehler. Glass scored the next Hawks goal as well to end the second period 2-0 Portland.

It remained that way until late in the third period when Skyler McKenzie scored an empty net goal, his 20th of the season, to make it a 3-0 final for the Winterhawks.

Goaltender Cole Kehler was third star of the night and made 22 saves for his 2nd shutout of the season.

TODAY’S OPPONENT: The month of November has been tough for the Lethbridge Hurricanes, but things seem to be taking a turn for the better recently. From Oct 29th to Nov 18th the Hurricanes lost eight games in a row after starting the season 7-5-0-0. But after that difficult stretch, it seems Lethbridge has righted the ship after their last three games.

The Hurricanes defeated the second-best team in the Western Conference, the Victoria Royals, last Tuesday 10-4. This past Saturday goaltender Stuart Skinner made 47 saves and recorded his 2nd shutout of the season in the Hurricanes 3-0 win over Kootenay.

Lethbridge is led upfront by over-age forward Giorgio Estephan. The 2015 Buffalo Sabres draft pick has 33 pts in 23 games this season to lead all Hurricanes. 2000-born defenseman Calen Addison, who has given a “B” rating by NHL Central Scouting earlier this month, has had a solid season thus far, posting 24 points in 23 games.

WINTERHAWKS TO KEEP AN EYE ON: The Hawks enter tonight’s game on a 10-game winning streak and a lot of the team’s solid play has to do with Cody Glass. The WHL named Glass the Player of the Week yesterday and rightfully so, he had 12 points in four games last week and has recorded four straight three-point games. His 44 points on the season rank him 6th in the WHL.

Skyler McKenzie has goals in seven of eight games. His 20 goals on the season put in him a tie for 5th in the WHL. Meanwhile, defenseman Henri Jokiharju has four straight multi-point games and has 32 points on the year, good for 2nd in the WHL among d-men.

STAT OF THE DAY: The Winterhawks have won four straight games in Lethbridge. The last time they lost on the road to the Hurricanes was November 3rd, 2007.

The Hawks are on the road for their next two games as part of their season long Central Division road trip. You can catch all the action at Winterhawks.com/listen or on the Winterhawks App. Portland returns home on Sunday, December 3rd against the Saskatoon Blades at the Moda Center. Get your tickets HERE!