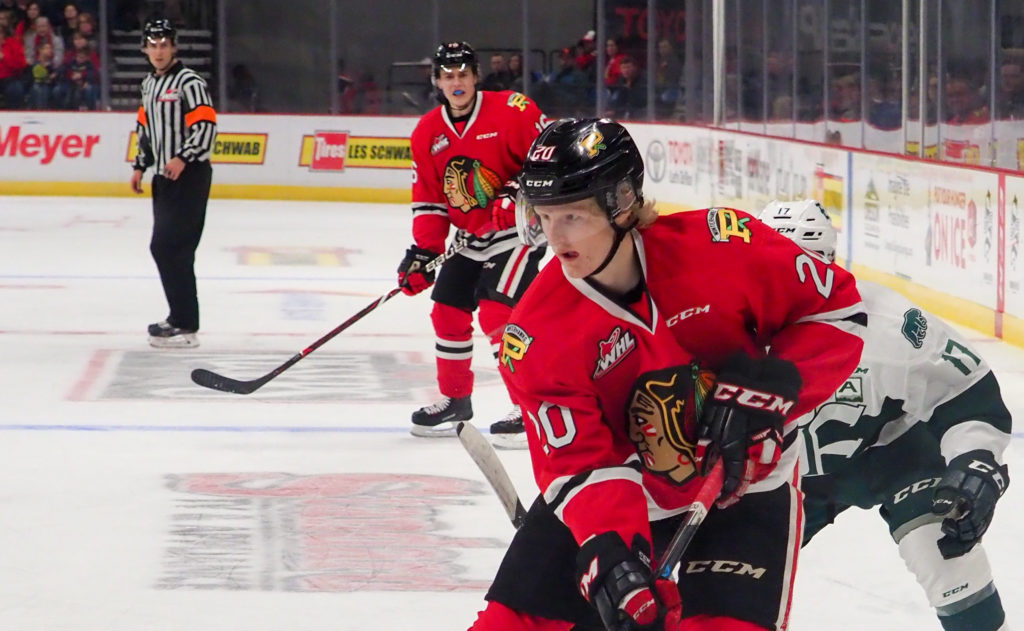 The Winterhawks visit Everett for the third time this season tonight. Portland has won on its first two trips to Xfinity Arena. Everett is coming in hot, they’ve won five straight and are 8-2-0-0 over their last 10 games.

PREVIOUS GAME: Winterhawks 3 at Giants 5: The Hawks were back on the road to take on the Vancouver Giants Tuesday night but a third period rally wasn’t enough, as the Winterhawks fell to the Giants 5-3.

The Giants would start off the third period with two more goals to go up 4-1 but the Hawks would respond. Alex Overhardt potted his sixth of the season on the power play at 11:24. Then Joachim Blichfeld made it a one goal game at 15:28. But the Giants would hold off Portland’s comeback, eventually taking it 5-3.

Goaltender Cole Kehler made 33 saves on the night.

TODAY’S OPPONENT: The Everett Silvertips enter tonight on a season high five-game winning streak. The Tips have been riding the hot play of goaltender Carter Hart, who on Tuesday was named CHL Goaltender of the Week.

Hart missed the first month of the season with mononucleosis, but has returned looking like his old self. The Silvertips netminder is first in the WHL in both goals against average and save percentage. Portland has seen Hart just once this season, beating him twice in a 3-1 Winterhawks win at the beginning of November.

Patrick Bajkov continues to play well for Everett. The over-age forward leads the Tips in points with 40 in 29 games. In the month of November, Bajkov had 12 points in 11 games. Over-age forward Matt Fonteyne is second on the team in both goals and assists behind Bajkov.

Over-age D-man Kevin Davis leads the way offensively from the backend for Everett, with 27 points this season. Davis

Joachim Blichfeld had two points in the Winterhawks 5-3 loss to Vancouver on Tuesday night. Despite missing five games with an injury, Blichfeld sits 4th on the Hawks in goals, with 11 in 22 games.

Keoni Texeira has points in four of his last five games, registering seven points over that span. The Winterhawks captain is three games away from tying former Winterhawk Brian Woolger for 7th on the all-time games played list for Portland with 308 GP.

STAT OF THE DAY: The Winterhawks are 7-1-0-0 when Joachim Blichfeld scores a goal.

Portland returns home this Friday to take on the Giants at the Veterans Memorial Coliseum. Then on Saturday, the Winterhawks welcome Everett to the VMC for the Hawks Annual Teddy Bear Toss game! Make sure to grab your tickets HERE!