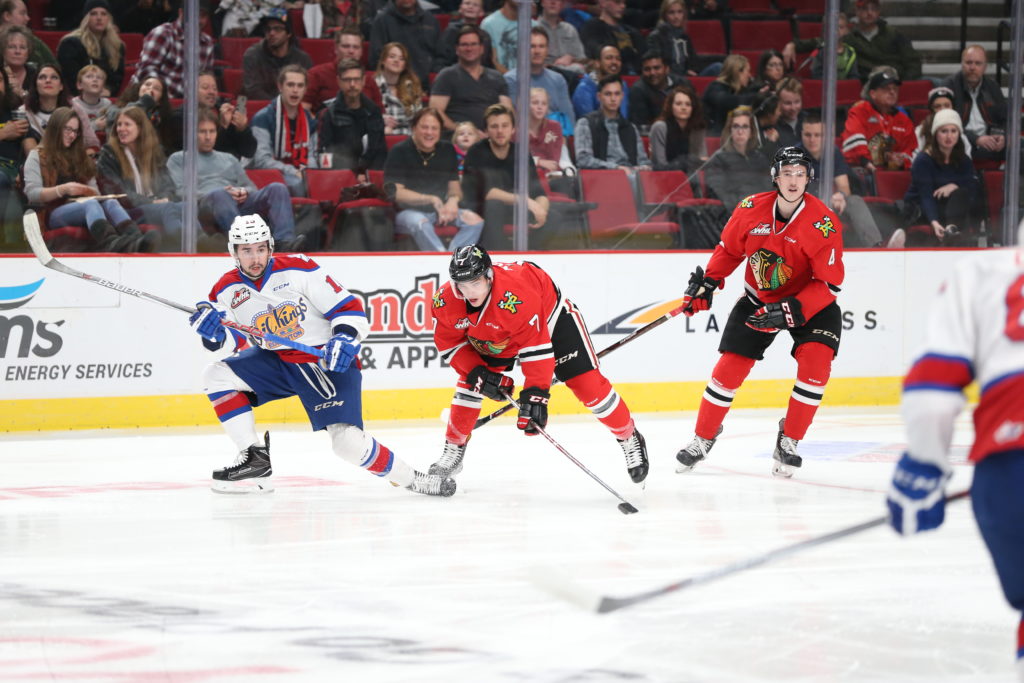 Portland takes on Edmonton tonight for their lone matchup against the Oil Kings this season. The Winterhawks enter tonight on a nine-game winning streak, they’re longest of the season. It will be Portland’s first time playing in Edmonton’s new arena, Rogers Place.

The Portland Winterhawks (18-4-0-0) scored the first goal of the night with Cody Glass potting one shorthanded at the 9:42. Red Deer (9-15-1-0) responded at the end of the period with a power play goal to tie things at one.

Red Deer took the lead early in the second, but the Hawks would dominate from then on out. Glass scored his 2nd of the night just 15 seconds later to tie things at two. Then Joachim Blichfeld scored twice to end the period, giving the Hawks a 4-2 lead after 40.

John Ludvig picked up his first WHL goal 2:27 into the third period to give the Winterhawks a 5-2 advantage. Blichfeld then wired home his third of the game midway through the period for his first career three goal game. Portland would win 6-2 and extend their winning streak to nine games.

Goaltender Shane Farkas was third star of the night and made 39 saves in the win.

TODAY’S OPPONENT: The Edmonton Oil Kings have had a difficult season. The Oil Kings enter tonight losers of their last 10 games and have not won since October 20th. They have the fewest points in the WHL and rank 21st in goals scored and goals against. However, during the 10 game skid, the Oil Kings have been close to winning a handful of times, they’ve lost five of their last seven games by just one goal.

Upfront for Edmonton, Trey Fix-Wolansky leads the way offensively. The 5’7” forward has 29 points in 23 games this season. He is the only Edmonton player to have more than 10 goals on the year. Tomas Soustal, acquired from Kelowna earlier in the season, has also been solid. Posting 23 points on the year and 21 in 18 games with Edmonton.

On the backend, Conner McDonald leads all Oil Kings in points with 13 in 23 games. The 5’11” d-man split last season between Edmonton and Kamloops, contributing 27 points in 67 games. Also keep an eye on 16-year old Matthew Robertson. The Alberta-born defenseman was a force at the Under 17 World Championships and has four goals in his rookie campaign thus far.

In net, over-ager Travis Child has made 14 starts on the season and is 4-9-1-0. Child has spent most of his WHL career as a backup, playing three seasons with Swift Current from 2014 to 2017.

WINTERHAWKS TO KEEP AN EYE ON: Joachim Blichfeld picked up his first career hat-trick on Friday in Red Deer. The Danish forward always seems to score in bunches, and with four goals in his last two games, expect his hot play to continue tonight in Edmonton.

Cody Glass extended his point-streak to nine games last night in Red Deer and now has 20 points over that span. Over the first three games of this Canadian road trip, Glass has posted nine points.

Defenseman Henri Jokiharju is now alone in 2nd in points among defenseman in the WHL. The Finnish d-man has 11 points in his last five games and three straight multi-point efforts. His +31 rating also ties him with teammate Cody Glass for best plus/minus rating in the WHL.

STAT OF THE DAY: In the month of November, only Swift Current’s Aleksi Heponiemi and Moose Jaw’s Brayden Burke and Jayden Halbgewachs, have more points than Cody Glass. (9 GP: 20 PTS)

The Hawks are on the road for their next three games as part of their season long Central Division road trip. You can catch all the action at Winterhawks.com/listen or on the Winterhawks App. Portland returns home on Sunday, December 3rd against the Saskatoon Blades at the Moda Center. Get your tickets HERE!