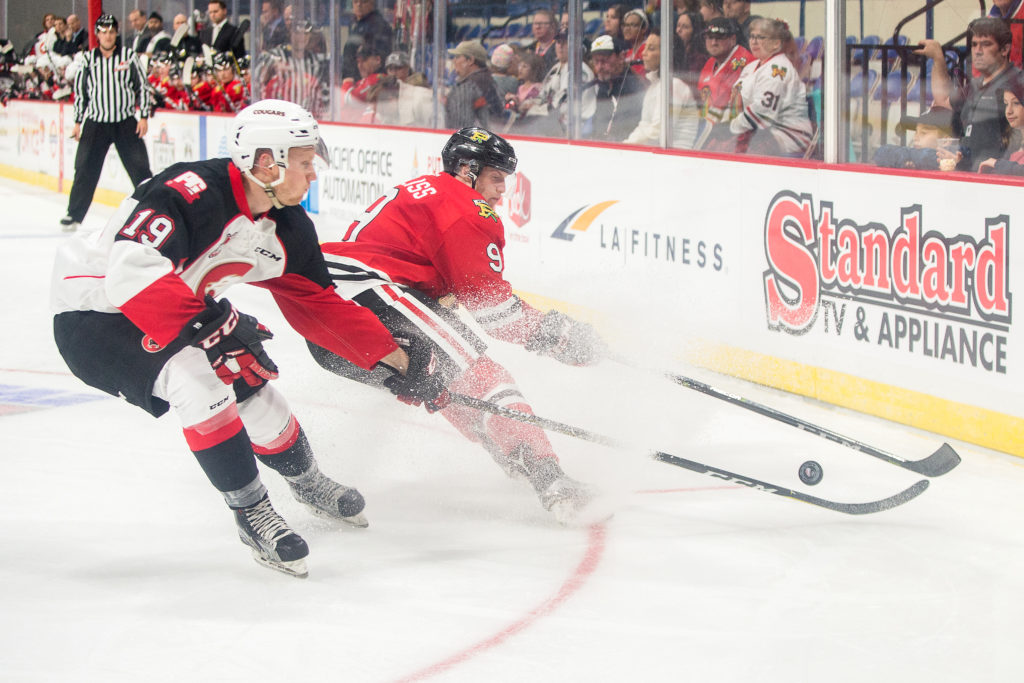 PREVIOUS GAME: The Winterhawks fell 3-2 to the Everett Silvertips on Sunday. Patrick Bajkov scored with under 30 seconds in regulation to give the Silvertips the win.

Winterhawks forward Lane Gilliss scored his first of the year, while Kieffer Bellows extended his point streak to eight games. Cole Kehler made 23 saves in the just his second loss of the season.

TODAY’S OPPONENT: The Winterhawks take on the Prince George Cougars for the second time this season. The two teams met for the first time on October 1st, with the Cougars coming away with a 3-0 shutout win.

Goaltender Tavin Grant was the story of that game, the 19-year old made 47 saves and picked up his first career WHL shutout. Grant has continued to play well this season, the BC-born netminder has allowed just five goals over his last three starts.

Upfront for the Cougars, forward Jared Bethune leads Prince George in points with 16 on the season. Kody McDonald, who had a goal against Portland on October 1st, leads the Cougars in goals with eight on the year.

Detroit Red Wings draft pick Dennis Cholowski has been a strong contributor from the backend. The 19-year old D-man has 14 points on the season and is tied for 10th in the WHL in scoring among defensemen.

WINTERHAWKS TO KEEP AN EYE ON: Kieffer Bellows enters the game on an eight game point streak. The Minnesota-native has eight goals and 16 points during that span. Defenseman Henri Jokiharju had a gorgeous assist that set up Bellows’ goal on Sunday, and he continues to rack up points from the backend. The Finnish D-man is tied for 6th in the WHL in scoring among defensemen.

Matthew Quigley has also had a strong season for Portland. The second year defenseman has eight points in 13 games this year, which is already a massive improvement on the three points in 49 games Quigley had all of last season.

The Hawks will look to avenge the 3-0 shutout loss they had against Prince George back on October 1st. In that game, Portland outshot the Cougars 47-29 but could not solve Cougars goaltender Tavin Grant.

STAT OF THE DAY:  Kieffer Bellows is one of just four players in the WHL to average two PPG since October 8th. (min. 7 gp)

The Hawks finish off the week with a pair of road games in Spokane on Friday and Everett on Saturday. Portland returns home for their first matchup of the season against the Tri-City Americans on Saturday, November 11th. Tickets are available HERE!