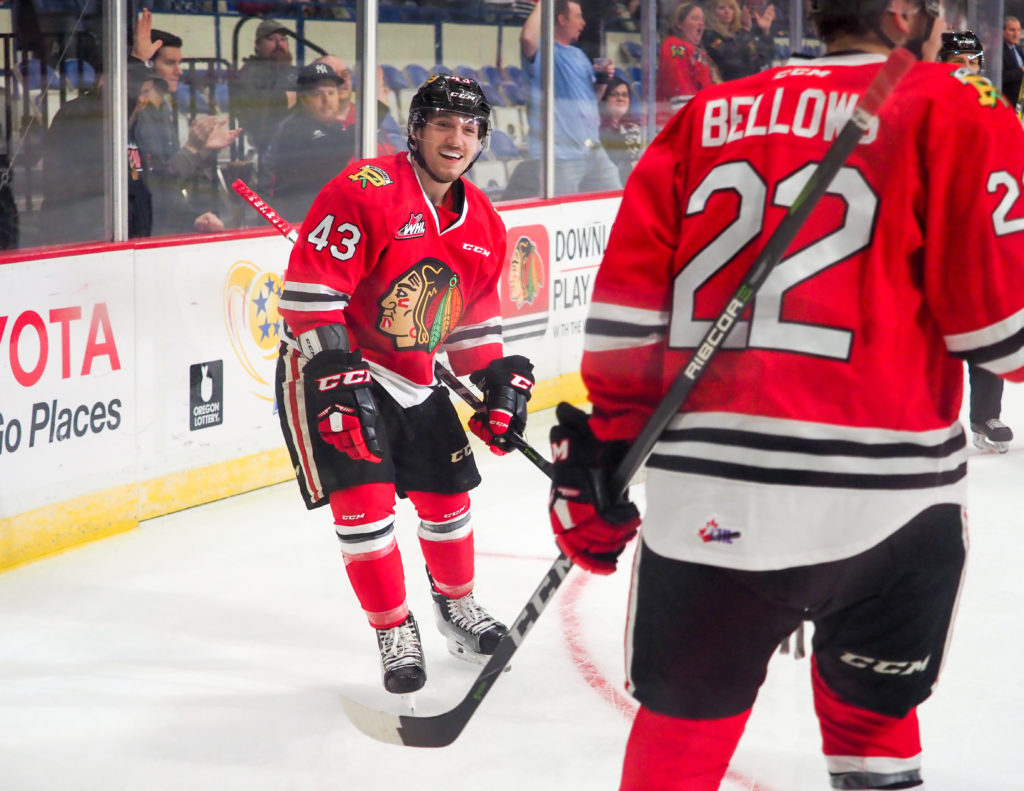 PREVIOUS GAME: Kieffer Bellows scored twice for the Winterhawks, but Portland couldn’t keep up with the Warriors as they fell 6-4 to Moose Jaw on Tuesday night.

Moose Jaw (10-3-0-0) got on the board first, with a goal from Brett Howden. The Hawks (9-3-0-0) quickly reacted with Skyler Mckenzie netting the Hawks first of the night. It was McKenzie’s team leading 12th of the year.

The second period started with another goal from the Warriors, but the Hawks were quick to respond again with Kieffer Bellows potting his 8th of the year with an assist from McKenzie. The Warriors would score two more later in the period to give them a 4-2 lead after 40.

Alex Overhardt scored on a rebound 2:40 into the third period to bring the Hawks within one. But the Warriors would respond 16 seconds later with Luka Burzan scoring to make it 5-3. Kieffer Bellows would bury his second of the night at 16:25, to make it a 5-4 game. But the Warriors but the game out of reach with Jayden Halbegwachs scoring an empty net goal to make it a 6-4 final.

WINTERHAWKS TO KEEP AN EYE ON: The top line of the Hawks continues to produce. Kieffer Bellows is currently on a seven-game point streak and has seven goals and 15 points during that span. Skyler McKenzie and Cody Glass both have career-long nine game point streaks. The longest point streak last season for Portland was 10 games, achieved by former Winterhawks’ captain Keegan Iverson.

Ilijah Colina also seems to be heating up. The 5’8” forward has points in four of his last five games and just missed picking up his second goal of the season against Moose Jaw on Tuesday after wiring a wrist-shot off the crossbar.

STAT OF THE DAY: Kieffer Bellows’ 15 points since October 8th are tied for 8th most in the WHL during that span.

TODAY’S OPPONENT: The Silvertips are coming off a 3-1 win over Kamloops on Friday. In Everett’s first matchup with Portland this season, Matt Fonteyne led the Tips in goals with two. Patrick Bajkov and Bryce Kindopp both had two assists in the 7-4 loss. Last season, Bajkov had 13 points in 10 games against the Winterhawks.

The Silvertips are still awaiting the return of number one goaltender Carter Hart. Hart has been out since September 30th with mononucleosis. Hart has practiced with the team recently, so it seems as though the two-time WHL Top Goaltender is nearing a return.

The Hawks next game is Wednesday, November 1st against the Prince George Cougars at the Moda Center. Tickets are available HERE!