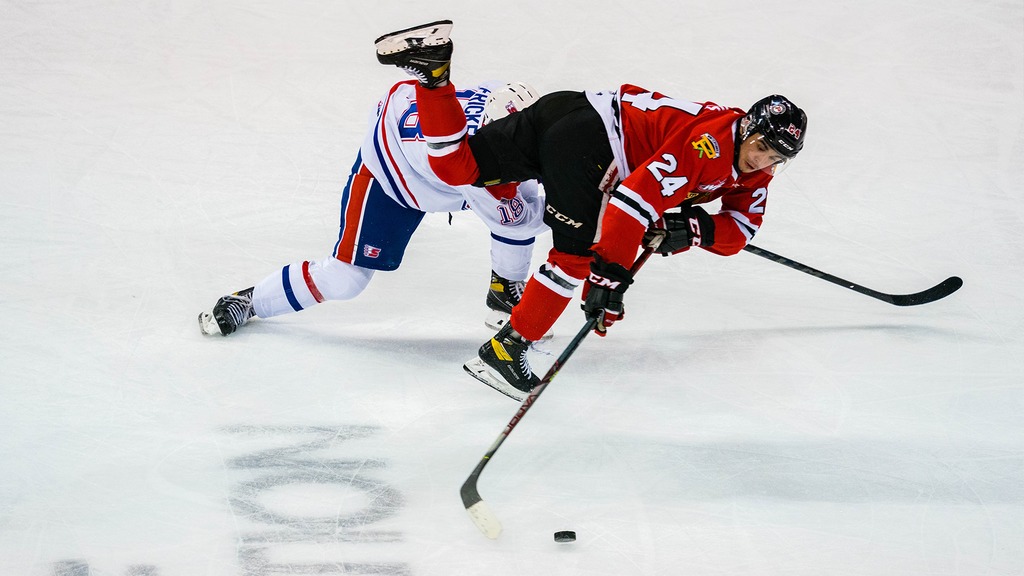 The Winterhawks scored on their first shot of the night for the second straight game but were unable to find the back of the net again Friday night in Spokane.

Portland continued their four-game road stint Friday night in Spokane, kicking off a pair of games with their first trip to Eastern Washington in 448 days.

The evening began much like Tuesday in Everett – with a Winterhawks goal on the very first shot of the night.

Mason Mannek, working his way up in front of the team’s benches before entering the zone, flung a seemingly harmless wrist shot past what turned out to be an unsuspecting Mason Beaupit for an early visitors lead. It was the third goal in three games for #26, who now has five on the season.

Mike Johnston’s club continued with momentum through the remainder of the first period, taking a 12-5 shots advantage along with their lead into the second frame.

Just 39 seconds into the second period the momentum changed though, as exiting the penalty box Bobby Russell of Spokane was hit on an outlet pass, capitalizing past Dante Giannuzzi to make it a 1-1 game.

Less than two minutes into the tied contest Brody Tallman took a holding minor for the Winterhawks and the home team would cash in on their lone power play chance of the night to take the lead at 2-1.

Following the quick turn of events Portland was able to respond, continuing to outshoot the Chiefs at a two-to-one clip. Despite not being able to beat Beaupit again, the 28-14 difference in shots provided hope that an equalizer may be coming in the third.

Unfortunately that was not the case and despite a few good looks, the only remaining goal in the game was an empty netter for Spokane, closing their 3-1 victory.

“I thought [the game] was a little scrabbly. We did have good puck possession in the offensive zone and quality shifts, we just really didn’t get quality chances out of it. They clogged it up, they were good in the corners, smothering us and it was a game that was hard to find space. We minimized their chances but we need to start scoring.”

– Forward Luke Schelter made his WHL debut for Portland in the affair. The recently turned 17-year-old registered two shots on goal.

– Defenseman Jonas Brondberg left the game with an injury in the first period.