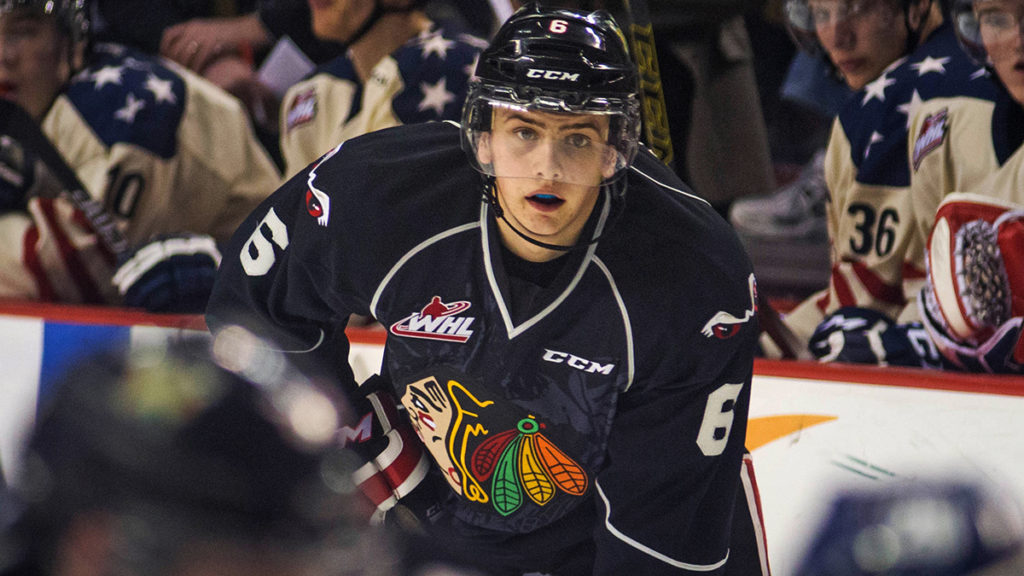 Edmonton, Alta. – Former Winterhawk Adam Henry was one of four former WHL graduates to get recognized as a Canada West end-of-season award winner. Henry claimed both the Top Defenseman and Student-Athlete Community Service awards. The University of Manitoba Bisons defender led the all defensemen with 11 goals.

The Winnipeg, Manitoba native played 31 regular season games with the Winterhawks during the 2014-15 season, amassing 18 points. He helped the Hawks to the Western Conference Finals that year, scoring five goals and 10 assists for 15 points in 17 playoff games.

Since finishing up his final year in Manitoba, Henry signed a contract with the Fort Wayne Komets, ECHL affiliates of the Vegas Golden Knights.

The 2020 CW Men’s Hockey Final is set for this weekend, as the UBC Thunderbirds travel to Saskatoon to take on the Saskatchewan Huskies. The best-of-three series opens Friday, February 28 at 9:00 p.m. PST and marks UBC’s first trip to the conference final since 1978 as well as the first meeting between the T-Birds and Huskies in the CW Final.

You can watch the action by tuning into Canada West TV Presented by Co-op.

It was another dominant season for Saskatchewan Huskie Taran Kozun, who is a dual award winner, claiming the conference’s Player and Goalie of the Year awards. Kozun follows in the footsteps of former Huskie standout goalie Jordon Cooke, who was the last CW player to claim both awards in the same season (2015-16).

The former Seattle Thunderbird led the conference in every major goaltending category, posting a 1.87 goals-against average, .931 save percentage, five shutouts, and 17 wins. Along with those sparkling numbers, Kozun also became just the second goalie in CW history to score when he found the net in January against the Calgary Dinos.

Thanks in large part to Kozun’s stellar season, the Huskies finished second in the conference standings, as the program’s all-time leader in shutouts (11) posted a third consecutive season with a save percentage north of .920.

Coach’s comments:
“For as long as I’ve been here – including as an athlete – we’ve always had good goaltending and Taran provides the level of play that our program expects. He’s earned the respect of the league over the last two years with the way he’s played. He’s consistently been a high achiever and obviously people respect him for his consistency at the top level.” – Saskatchewan Head Coach Dave Adolph.

Adam Henry combined excellence on the ice and in the classroom during his final season with the Manitoba Bisons to claim the Merv “Red” Dutton Trophy as the conference’s top defenseman, along with the Student-Athlete Community Service award.

Henry topped the conference in defensive goal scoring this season with 11 markers, while his 11 assists gave him 22 points on the season to finish third overall in the defensemen scoring race.

Off the ice, the Manitoba captain finished with a 3.0 GPA in the Asper School of Business and was active in the University of Manitoba Athlete’s Council (UMAC), volunteering for the group’s anti-bullying and youth literacy campaigns, along with work at Siloam Mission, and the UMAC Christmas hamper program.

He is also involved in coaching minor hockey, assisting at the Laker Hockey Academy.

Coach’s comments:
“The University of Manitoba is thrilled to see Adam honored with a Canada West First All-Star Team selection and two major awards. We are extremely proud of the excellence Adam has achieved in athletics, academics, and community service throughout his five seasons at the U of M. Adam is an exceptional leader and a highly talented student-athlete who is an outstanding role model.” – Manitoba Head Coach Mike Sirant.

Former Vancouver Giants captain Jared Dmytriw stepped into a major role for the Saskatchewan Huskies and made the most of the opportunity.

The Craven, Sask. native is the CW Rookie of the Year (U of A Hockey Alumni Trophy winner) after suiting up for all 28 regular season contests, registering a conference-best 28 points among rookies.

Coach’s comments:
“Jared had a fantastic 20-year old season in the WHL and we had the good fortune to convince him to come back to Saskatchewan and play. I didn’t expect him to come in and be our leading scorer, but I knew with his motor that he was going to be really good. He’s committed, has brought it ever since he first came on the ice for us, and I think he’s a surprisingly gifted player.” – Saskatchewan Head Coach Dave Adolph.

ROOKIE OF THE YEAR

Veteran two-way forward Levi Cable has claimed the UBC Hockey Alumni Trophy for sportsmanship and ability.
Cable posted the third 20-point season of his career in 2019-20, registering 10 goals and 14 assists. He also registered a second consecutive penalty free season, as he concluded his five-year CW career with just 18 penalty minutes.

Coach’s comments:
“I think Levi has been the best two-way forward in the league since about mid-way through December in his first year. He brings it, is a reliable player at both ends of the rink, and scores game-winning goals week-after-week. He’s first on the puck, aggressive, and physical.” – Saskatchewan Head Coach Dave Adolph.

Regina Cougars head coach Todd Johnson is the CW Coach of the Year after doubling Regina’s win total from a year ago, as the Cougars won eight games in 2019-20. Bolstered by the mid-season addition of forward Tanner Nagel and backstopped by the stellar play of goaltender Brandon Holtby, the Cougars reeled off 13 of a possible 16 points in their first eight games of the second half of the season.

The Cougars narrowly missed out on their first trip to the Canada West postseason since the 2012-13 season, finishing three points back of Manitoba for the sixth and final playoff spot.

Johnson becomes the U of R’s second Canada West Coach of the Year, joining Bill Liskowich (1992).

Athletic director comments:
“We are thrilled for Todd’s CW Coach of the Year honor. Todd is the full package in terms of U SPORTS coaches – he’s an excellent technical and tactical coach with a high-performance mindset. He’s also a wonderful human being who models values and behaviors so that his student-athletes may go on to be high-performing community contributors.” – Regina Athletic Director Lisa Robertson.

COACH OF THE YEAR

About Canada West
Since 1972, Canada West (CW) has been a leader in Canadian university sport, working to provide our student-athletes the opportunities to excel in sport, the classroom, and their communities. CW and our 17 members from across British Columbia, Alberta, Saskatchewan, and Manitoba collectively carry on a legacy of competitive excellence, as our champions proudly go on to represent the conference at U SPORTS national championships.