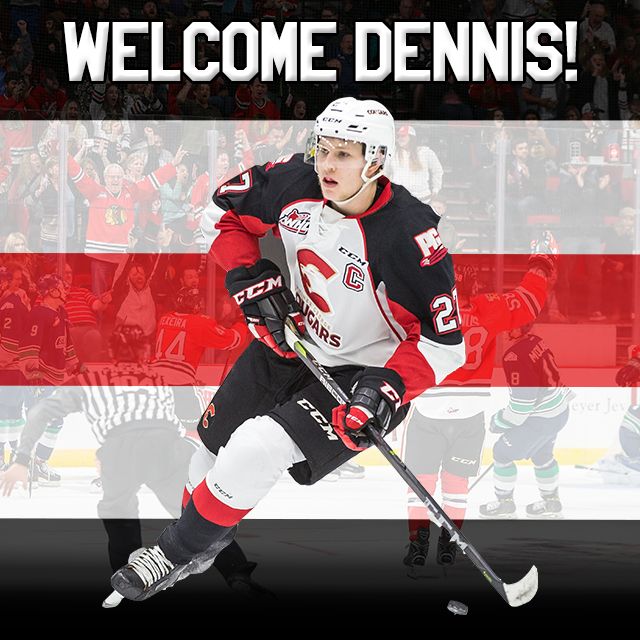 Cholowski (6’1”, 200) is enjoying a massive first year in the WHL, with 13 goals and 39 points in 37 games. The product of Langley, British Columbia was drafted in the first-round, 20th overall by the Detroit Red Wings in the 2016 NHL Entry draft. He is currently ranked second in the WHL in goals among defenseman and sixth in points.

“We’re extremely excited to add Dennis to our lineup” said Winterhawks Vice President, General Manager and Head Coach Mike Johnston, “It’s always been our philosophy to have transitional defensemen on our backend and he fits in perfectly with our style of play.”

Cholowski was named captain of the Cougars on November 21st, 2017. He played for Team WHL at the CIBC Canada – Russia series and was also invited to Team Canada’s World Junior Selection camp this past December.

Ty Taylor is an 18-year old goaltender playing with the Vernon Vipers in the BCHL. In 22 games this season with the Vipers, Taylor has 1.90 goals-against-average and a 9.29 save percentage. Portland drafted Ty’s brother, defenseman Trey Taylor, in the ninth-round of the 2017 WHL Bantam Draft.

Ilijah Colina was in his second season with the Winterhawks. In 83 career games with Portland, Colina registered four goals and 27 points for the Hawks. He was originally draft by Portland in the eighth-round of the 2015 WHL Bantam Draft.

Bowie is a 16-year old forward who was a seventh-round pick of the Winterhawks in the 2016 WHL Bantam Draft. He has spent most of this season with NE BC in the NAMHL.

“It’s always tough to see a player like Ilijah leave. He’s been a great individual both on-and-off the ice over the last two seasons for us.” Johnston said, “Both he and Connor Bowie will be very good players in this league for many years.”

Portland is back in action this Friday in Kennewick to take on the Tri-City Americans. The Winterhawks then return home on Saturday to face off against the Seattle Thunderbirds at the Veterans Memorial Coliseum.