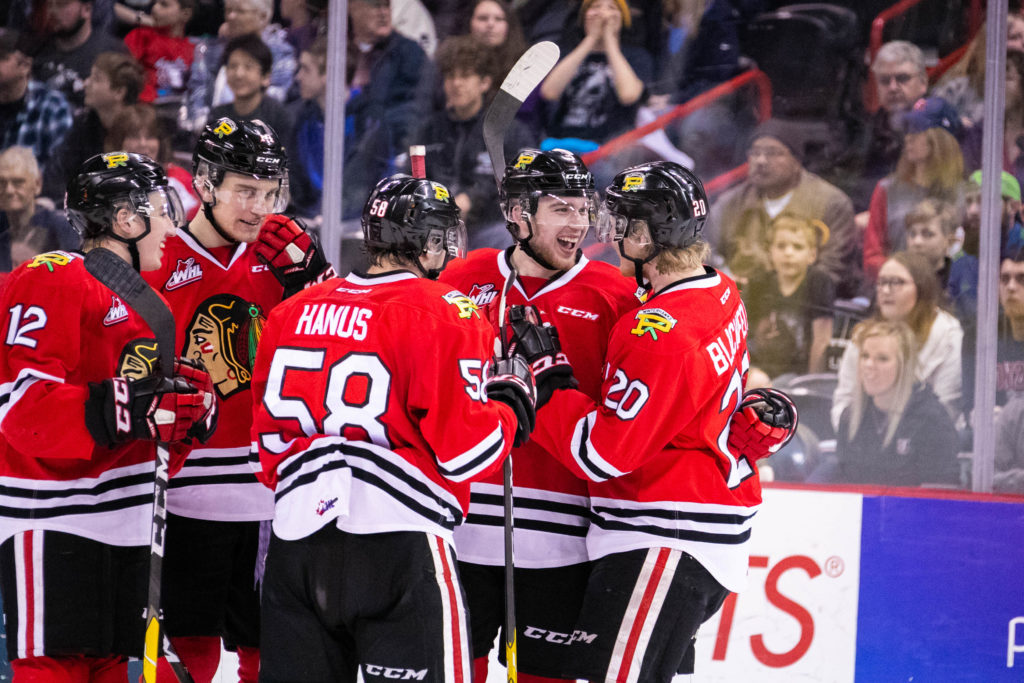 The Portland Winterhawks open its doors for the first two home games of the 2019 Western Hockey League Playoffs. The opening round series is tied a 1-1 heading into Tuesday night’s game.

The Winterhawks and Chiefs meet on Tuesday and Wednesday nights in Portland with the best-of-seven series tied at 1-1. They are one of four Western Hockey League series that are tied entering play Tuesday night.

“It was huge. Obviously you don’t want to go there without a win,” goaltender Joel Hofer said. “You want to at least come out of there with a split. I thought the team battled. Obviously going down 2-0 early, the team never quit and it showed a lot of character.”

Hofer backstopped the Winterhawks to his first career playoff victory in the WHL, doing so with a couple of highlight reel stops in games one and two. He is the first 18-year-old goalie to win a playoff game for the Hawks since Adin Hill in the 2015 postseason.

The Winnipeg, Manitoba native is looking forward to being involved in more game-changing moments as his playoff career continues.

“Yeah, that’s what everyone kind of lives for,” Hofer added. “It’s playoff hockey. Everything is going to be high intensity and I’m glad I came through with a few of those saves.”

In 21 of the organization’s last 23 playoff series, the Hawks managed to win at least one road game. That is extremely impressive considering four 16-year-old forwards (2002 born skaters) played in game two.

The Winterhawks top scoring line produced just two assists in the 5-3 road win, so everyone was playing their role even strength.

“You look at [Tyson] Kozak, his very first playoff game as a young 16 year old kid. And I thought Haydn Delorme played well with Mannek also on that line. They generated some momentum, then we bumped Mannek up and played with three lines after that, but I really liked the energy that our young guys played with,” General Manager and Head Coach Mike Johnston said.

In Spokane, five different Winterhawks rookies scored their first WHL playoff point, including Kade Nolan. “When I first got out there, it was pretty exciting, lots of energy. Just before [game two], the guys were fired up so it was a good atmosphere. I thought the first shift I just tried to get the nerves out and feel things around,” Nolan said.

From the player’s perspective, the Hawks were committed and took ownership.

“Everyone does have their own role. Whether that’s being a leader on the bench or whether that’s playing every other shift, everyone has kind of accepted that and it especially showed in the win. Everything is working out for us right now so hopefully we can keep this going,” Mason Mannek said.

Defensively, John Ludvig will serve his final game of a two game suspension on Tuesday. This will allow another opportunity for the younger players to eat a few more minutes.

“I thought tempo was up in practice [on Monday morning]. High energy. All the guys are talking around and getting excited so it was good,” Nolan added. “We need to get the crowd into it and get things going to play our game.”

And the work is most certainly not over, “We tried to get at least one game out of the series and now they are going to try really hard, too. They don’t want to go down 3-1, so, we know we have to push hard,” Hofer said.

The Winterhawks have 43 career postseason wins against the Chiefs, the most wins against any WHL franchise in the playoffs. Portland will look to expand upon that tonight and tomorrow at Veterans Memorial Coliseum. Puck drop is set for 7:00 p.m. both nights.

Winterhawks goaltender Joel Hofer signed his first career National Hockey League contract last week with the St. Louis Blues. “Obviously it’s unbelievable. It’s every kid’s dream to go to the NHL and for me to come one step closer to that is amazing. Obviously, I have a lot of work to do, but I’m looking forward to it.”

Join Dean “Scooter” Vrooman and Andy Kemper on the Portland Winterhawks Facebook page at 6:35 p.m. PT on Tuesday and Wednesday for a 20 minute preview show outlining the upcoming home games against Spokane.

The preview show will also be aired on the radio and WHL Live broadcast before the puck drops between Portland and Spokane. If you would like to tune in to the preview show, bring your radios to the game and tune in to 87.9 FM.