WHL Playoffs: Round One Preview – Game #5 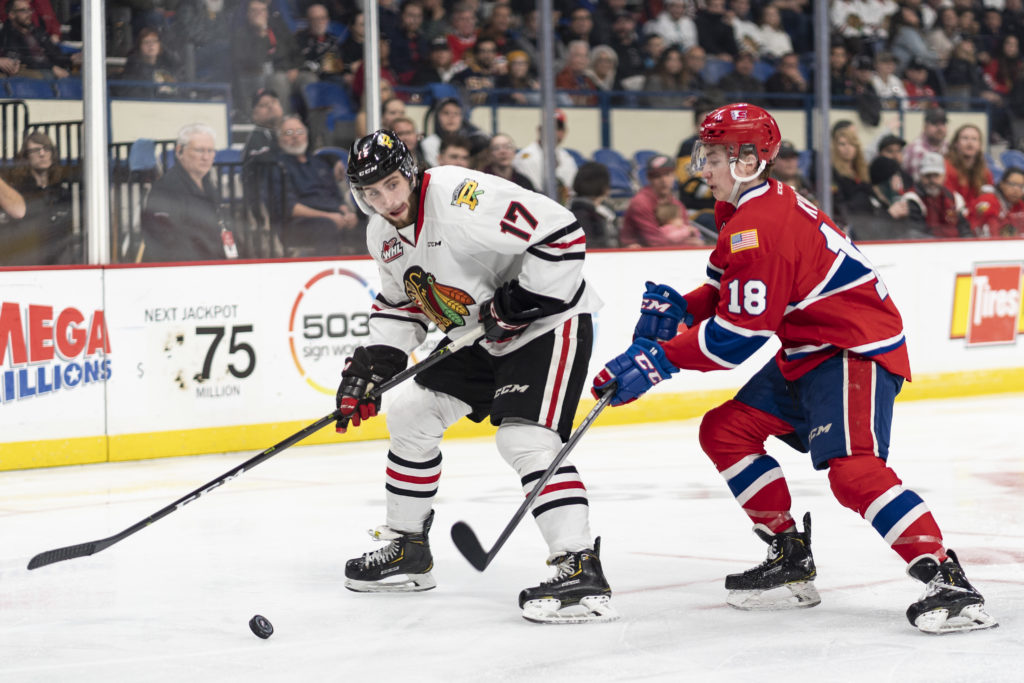 The Portland Winterhawks travel to Spokane for an elimination game in game five. Down 3-games-to-1 in the series, the Hawks have to win three in a row to advance to the Western Conference Semifinals. So the focus is on winning Saturday night.

Following back-t0-back overtime loses in the Rose City, Portland is playing for its season on Saturday. Two tightly contested games earlier this week could have been decided either way, but the Chiefs prevailed both nights after regulation.

Following the game four loss on Wednesday, General Manager and Head Coach Mike Johnston said “We played well tonight is what I told them, we played really well. All we have to do is play well the next game. We are going to be fine in the series. Last year we were ahead 3-1 in the series and it goes to Game 7. We know if we win in Spokane we come back here. They don’t want to come back here, that’s a tough way to play. I think as the series has gone along I really think our team has gotten better, and better, and better every game.”

In the 2018 playoff series against Spokane, Spokane was able to win on the road in game five to prolong the series, eventually sending the series to a deciding game seven like Johnston said. The Winterhawks will be looking at a similar situation tonight and they will try to be the first Hawks team to come back after being down 3-1 in a playoff series. Spokane made history in 1996 against Portland when they became the first WHL franchise to come back from a 3-0 series deficit and advance. Portland will have a slightly easier road than that with a win already in hand.

Through four games, the Chiefs have yet to see the Winterhawks at full strength. Defenseman and NHL Draft prospect John Ludvig essentially missed the first three games of the series with a suspension before returning to the ice in game four and the Hawks’ captain Cody Glass has missed 12 straight games in March. That could change for game five.

Mike Johnston told Kerry Eggers of the Portland Tribune earlier this week, “We expect Cody to be able to play on Saturday. He’s the best player in the league. It’s huge to have him back. If we get that game and get momentum back on our side, that’s all we need.”

Glass has only appeared in two of the ten meetings against Spokane this season, but he secured three primary assists. In 27 WHL playoff games, Glass scored 25 points.

One player who has continued to flourish in Portland is third year forward Josh Paterson. He enters game five tied for second in goals and tied for third in points in the Western Hockey League playoffs. “Paterson is great in that ten-foot area around the net,” Johnston said. “He is smart with the puck, he knows how to find pucks, he’s had a really good series right now.”

The Winterhawks have already won twice in Spokane this season, and they need a third win tonight to avoid the off-season. Fans can watch the playoff game together at any of our viewing locations.

“It’s a series where both teams don’t want to put the other team on the power play. (The skaters) are playing good defensively, good with their sticks, and the refs aren’t over calling it and it’s been a very unique series that way. Playoff hockey, lots of battles, but not a lot of penalties,” Mike Johnston said.

The Winterhawks are 2-for-9 on the man advantage in this series, while the Chiefs are tops in the Western Hockey League going 5-for-9 on the power play.

If the Hawks secure a Saturday night win, the Winterhawks will take the series back to Portland on Monday, April 1 at 7:00 p.m. Tickets would go on-sale soon after the conclusion of game five.