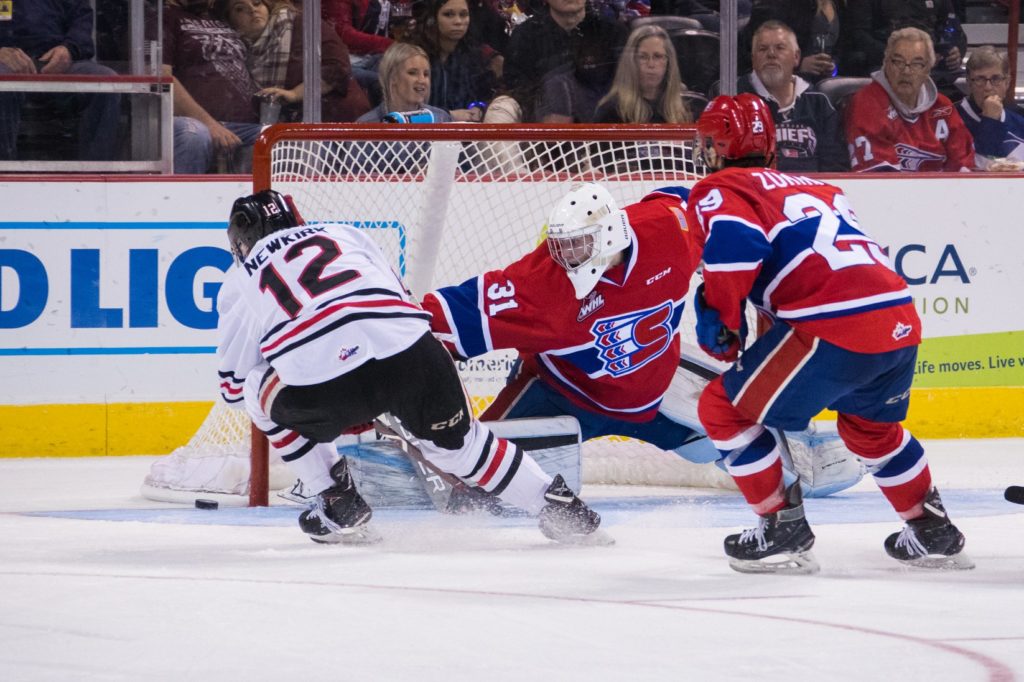 Sixty eight games later, we are ready for the opening round of the 2019 Western Hockey League Playoffs. The field of 16 is set and the No.3 Portland Winterhawks will play games one and two against the No.2 Spokane Chiefs on the road Friday and Saturday night respectively.

On Friday evening, the Portland Winterhawks open its U.S. Division semifinal series on the road against the Spokane Chiefs. The Winterhawks own four straight playoff series wins against the Chiefs dating back to the 2010 postseason.

Last March, Spokane dropped two of its three home games in the opening round match-up against Portland as the Winterhawks advanced with a 4-3 series win. This time around, the No.2 seed will have a spark heading into the playoffs and the Hawks need to be ready.

“They’re a fast team for sure; they play a lot like us,” defenseman John Ludvig said. “They have a deep lineup and we’re focusing on just amping up our intensity all around in our game. It’s been a good week of practice for us and we’re ready for them.”

Rookie Jaydon Dureau, who prepares for his first WHL playoff action, mirrors that sentiment. “Everyone is getting anxious. We’ve been a lot more on our toes and getting ready for our series against Spokane. You think about the whole season, [playoffs are] the big picture. The small losses you had during the year or the overtime wins are now more about being in the playoffs.”

After a pair of weekend losses to Seattle on March 16 and 17, the Winterhawks finished in third place in the division, thus surrendering their home-ice advantage in the opening round. Spokane did its part by winning eight of its last ten games to catch the Hawks in the standings.

During the regular season, Portland went 3-3-0-0 against Spokane, winning two of those games at home.

“We definitely wanted to have home ice, but it didn’t turn out that way. It doesn’t change much for us so we’re still going to go in same mindset,” Ludvig added. “It’s playoff hockey so we’re going to have to be battling as hard as we can and nobody is playing for themselves anymore.”

Spokane is the only team in the Western Conference that surpassed Portland in goals scored during the 68-game regular season. The Chiefs enter game one averaging nearly five goals per contest in March and they hold a +35 goal differential against their opponents in their last 21 games since February 1.

In Mike Johnston’s Portland tenure, the Winterhawks have advanced four of seven times as the underdog seed and have won at least one road game in all seven of those series.

Though a player like Jared Freadrich has yet to go head-to-head against Spokane into April, the Winterhawks alternate captain is more than hungry for his final trip to the WHL playoffs.

“It’s definitely something you work toward all year. I’ve been in the playoffs the last three years and you’re thinking about that last loss in playoffs and it fuels you throughout the summer and you just want to get back to that moment. I’m just excited to get it started on Friday.”

Overage defenseman Freadrich has played for four different teams during his WHL tenure and he leads all Hawks skaters with 30 games of playoff experience. “It being my 20 year old season, it means that much more. I want to make it as good of a run as it can be and enjoy every step of it.”

But this year’s Winterhawks team could be the group that allows Freadrich to play for the Ed Chynoweth Cup.

“I think we’re a pretty close team,” Freadrich said. “We’re a younger team [than other WHL playoff teams I’ve been a part of], but we have the skill throughout. We have a speedy team. We aren’t the rough and tough team, but if we use our skill and speed to our advantage and play how the coaches want us to, we will be fine.”

There is no denying the Winterhawks have playoff experience. Their players on roster have combined for 196 playoff games, while Spokane has 141 games. But for 11 of the 23 rostered players for the Hawks, Friday night will be their first taste of the WHL Playoffs.

Heading into the series, “I think we’re really confident,” Dureau said on heading into his first major junior playoff series. “We know it’s a really good match-up between the two teams and it’s been back-and-forth between us this season.”

Spokane finished the regular season with the best power play in the WHL, operating at a 29-percent clip. Portland finished fourth in overall penalty kill percentage and the players know special teams play will heavily factor into this series.

“Special teams definitely win you games in the playoffs and in the regular season. But in the playoffs, everything is magnified so much more. I think getting our power play going early is going to be a key to the series.”

The Hawks are 10-for-36 on the Oregon Lottery Powerball Power Play in March. Freadrich has been a large reason for the team’s success in that department. He is sixth in the WHL in defensive goal scoring with 15 tallies and over half his season points coming on the man advantage. Bob Clarke Trophy Award Winner Joachim Blichfeld and Jake Gricius are tied for the team lead with 16 power play goals during the season.

Spokane’s offense will be a lot to handle and they are coming off a 10-1 whomping over Tri-City. Adam Beckman is second among WHL rookies with 32 goals. Chiefs co-captains Jaret Anderson-Dolan and Ty Smith are both nearly point-per-game players in the posteason. Smith was recognized earlier this week by WHL Head Coaches and General Managers as the Western Conference Defenseman of the Year and First Team All-Star.

Buckle in for a tremendous opening round series. The Winterhawks lead the head-to-head playoff meetings 38-28 against Spokane. Six of the eleven all-time meetings have needed all seven games (all nine in 1985-86).

Winterhawks rookie forward Jaydon Dureau on getting his first WHL postseason action: “You don’t realize how great the league really is. I get to watch a guy like Cody Glass who will be playing in the NHL someday and that’s really cool. In midget hockey, you have guys who are drafted in the WHL, but it’s really exciting joining the Western Hockey League and being around different guys and seeing where they go. This is one step lower than the dream come true for all these boys growing up.”

The preview show will also be re-aired on the game one broadcast tonight before the pucks drops between Portland and Spokane.