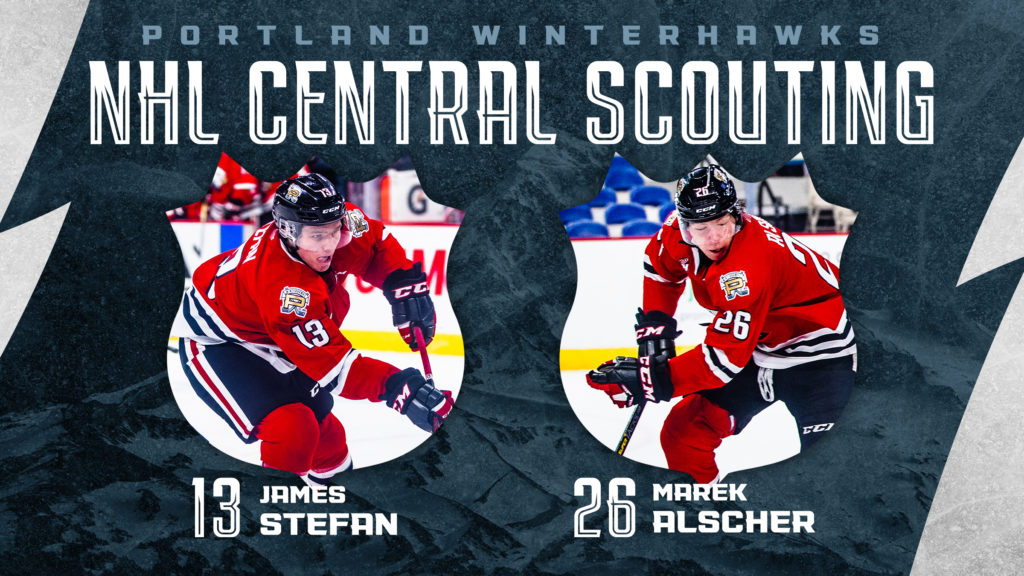 Portland, Ore. – The Portland Winterhawks, proud member club of the Western Hockey League, are proud to share that two current players have been named to NHL Central Scouting’s mid-term rankings ahead of the 2022 NHL Draft in Montreal.

Defenseman Marek Alscher, 17, and forward James Stefan, 18, were recognized on the latest list after strong starts to their respective campaigns.

Alscher has posted four goals and two assists through 28 games in his first year with the Winterhawks, and was one of three Portland players named to NHL Central Scouting’s initial “Preliminary Players to Watch” list in October. Originally selected by the Winterhawks with the 26th pick in the 2021 CHL Import Draft, the Kladno, Czech Republic native arrived in Portland after a strong 2020-21 season with the Pelicans U18 program in Finland where he posted 14 points in 27 games.  Alscher also recently competed for his country at the Hlinka Gretzky Cup.

Currently in his second full WHL season, Stefan has already posted career-best numbers through just 32 games this year. The Laguna Beach, Calif. native boasts 15 goals and 16 assists this season, tying him with Tyson Kozak for a team-best 31 points. Stefan tallied five goals and four assists in a 49-game rookie campaign, then spent the majority of the 2020-21 season with the Lincoln Stars of the USHL ahead of the WHL’s abbreviated season. There, he recorded 28 points in 41 games before returning to the Winterhawks for six games, during which he posted three assists.

In total, 53 WHL players were named to the mid-term listed. The Winterhawks are one of 17 Clubs with at least two players listed. The full list of ranked WHL skaters and goalies follows below.

Help us ensure that hockey is for everyone during our second annual Pride Night on Jan. 28 against the Prince George Cougars.  Fans can get a ticket to the game and this year’s exclusive Winterhawks Pride t-shirt for as low as $40!  Visit winterhawks.com/pride to get your ticket & t-shirt package today.