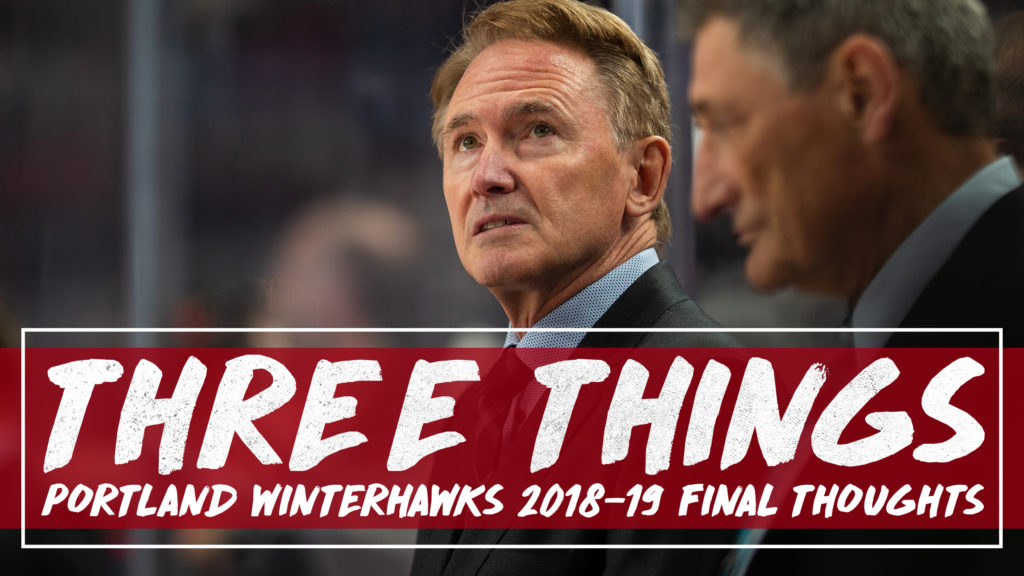 The Portland Winterhawks accomplished many things during their 43rd season in Oregon. We’ll take a moment to break down some numbers and hear the final words from Head Coach and General Manager Mike Johnston on the 2018-19 season.

Throughout the year, the Hawks enjoyed the company of over 200,000 screaming fans at the Rose Quarter while amassing their third straight 40-win campaign. Maybe the biggest feather in the cap for the organization was the fact that Portland made it ten consecutive trips to the postseason with one of its youngest teams of the decade.

“We were worried at the beginning of the year that we had eight or nine new players to the league and I know that it’s a tough league no matter if you’re 16 or 17 coming into the league as a rookie,” Johnston said. “There are going to be some moments during the year, normally at the beginning of the year when you’ll struggle, where your confidence will go up and down. So our maturity as a group, I thought, started to round into form around Christmas and then our trip out East.”

After an impressive start to the season, the Winterhawks quickly found themselves in a race for the U.S. Division Championship. One of the Hawks biggest assets was winning outside of the division, compiling a 24-7-0-1 record and beating 18 of 21 opponents they faced.

Offensively, the Hawks were very talented. Portland finished sixth in goals scored this season, led by Western Conference Player of the Year Joachim Blichfeld. The Danish forward became the third Winterhawk in the last seven years to claim the Bob Clarke Trophy for most points (114) in the regular season and he cemented himself 21st in all-time Winterhawks scoring with 105 goals over the course of 187 regular season games.

Multiple players set career highs this season with Reece Newkirk making one of the biggest leaps from 11 points during his rookie season to 59 points in year two. Newkirk will be a touted NHL Draft prospect this June, ranked 81st among North American skaters on the NHL Central Scouting List..

As expected, the Hawks graduates had impressive 20-year-old seasons. Blichfeld’s point production rose from 56 to 114 in one season and he became the 23rd player in Hawks history to score at least 50 goals in one season. Jared Freadrich broke career highs with 15 goals, 33 assists and 48 points, while Brendan De Jong set new career bests with 20 assists and 27 points despite missing 17 games.

In net, the Winterhawks boasted one of the best tandems in the Western Conference. Goaltender Shane Farkas more than doubled his win total to 30 this year and he set a career best goals-against-average at 2.71. As a regular starter this season for two WHL organizations, Joel Hofer amassed 16 wins and three shutouts.

To put a bow on the season honors, captain Cody Glass and alternate captain Blichfeld were both recognized as First Team All-U.S. Division players.

Eleven Hawks appeared in their first ever WHL playoff game this passed month.

“I wish we had more playoff games because I think kids grow twice as fast as they do in the regular season, but our 16 year olds in the playoffs played primary roles. A lot of times playoffs don’t play very big roles, like on the 4th line, or be an extra defenseman. But our guys played primary minutes and they did a good job at it. I believe that that’s going to really help them next year,” Johnston said.

With that experience coming back next season, Mike Johnston alluded that the Winterhawks could only be adding “4 or 5 new guys” for next year’s team compared to the eight rookies who began 2018-19 on roster.

This season, forwards Seth Jarvis, Jaydon Dureau and Cross Hanas all cracked the top ten of rookie scoring in the Mike Johnston era. Jarvis had a historic year finishing with 39 points, the most points from a 16 year old in over 25 years with the Hawks.

On the three 20 year olds: “Well we acquired Fready last summer heading into the Bantam Draft because we knew we needed a mature guy who could quarterback the power play, but he was much more than we expected. He did everything we asked and had a phenomenal season and then you’ve got two players that have been with us for several years.

Blich came back from San Jose as a signed player, had a great season overall and some huge milestones. And Brendan DeJong was a guy I recruited at 15 to come here after we drafted him, so I’ve known him since he was 15. He’s had a really good career, drafted by Carolina, we’ll see what happens with him professionally. But he has continued to mature, I don’t think he’s reached his full potential yet because he is still filling into his body and he just keeps getting better and better every season.

Every team in our league that’s good has quality 20 year olds, and you prefer that they are your guys, but getting Freadrich in was great for us because he fit right in like he was one of our guys.”

On Cody Glass: “I thought Cody really matured as a player the last couple of years. His work ethic, his overall game was at another level, he was clearly the best player in the league. He could do everything for you. He could change the game because of how he played defensively, because of how he could play offensively, he was a game breaker everywhere, on the penalty kill, on the power play. I wish we had him longer, it’s unfortunate that he got banged up at the wrong time and then World Juniors. We have good players that are going to be going to World Juniors. We expect every Christmas we are going to lose a few guys. So we knew we would lose Cody, we just didn’t realize we would have that many different things happen to him at the second half to cause him to be out of the lineup because unfortunate for us he was a key guy.”

On the message to the returners heading into the off-season: “We just need them to take a step, and we need them to be really focused. Really focused on coming back to take our team further in the playoffs and start to win pendants and championships, things like we have done before. I think we are on the verge of that type of scenario, but we need them to have big summers. It’s the first time we have been beat out in the first round and I think for them it’s a chance for them to get extra training time and to put in the time that it needs back in August for them to be driven.”