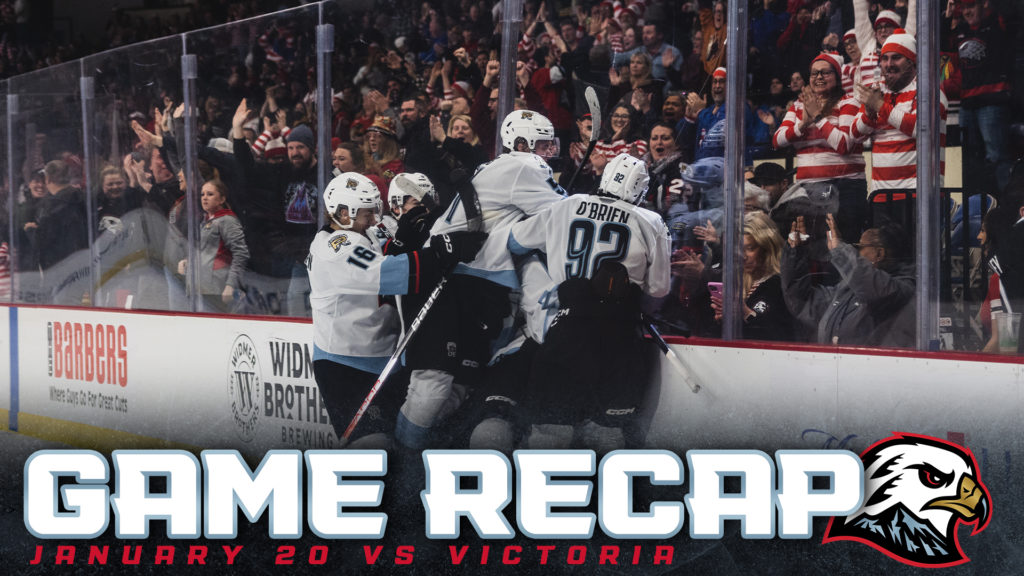 A back-and-forth track meet ended on Kyle Chyzowski’s wrist shot midway through overtime as the Winterhawks took a 7-6 victory over the Royals.

Gabe Klassen, Robbie Fromm-Delorme, and James Stefan each scored twice, and Kyle Chyzowski tallied the overtime winner as the Winterhawks rattled off three unanswered goals in a 7-6 OT victory over Victoria on Friday.

Skating in a 3-on-1 with Marek Alscher and Jack O’Brien, Chyzowski loaded up a wrist shot as he crossed the blue line and wired the puck off multiple goalposts and the back of Royals goaltender Braden Holt for his 11th goal this year and a Portland victory.

Prior to overtime, both teams were scoring in bunches. Early on, Portland wasted no time grabbing its first lead of the night as Stefan struck just 12 seconds into the contest for his first of the night. Corralling a loose puck at the blue line, he raced into the zone down the right-wing side and snuck a shot through the five-hold of Braden Holt just after the opening faceoff. Alex Thacker responded for the Royals three minutes later, but Stefan again restored the Hawks’ lead at 10:07 as he tapped home a power-play rebound to make it 2-1. Lucius grabbed a helper on the play for his first WHL point. Before the end of the frame, though, Victoria’s Teague Patton struck late to make it a 2-2 game heading into the middle stanza.

The Hawks again grabbed the lead midway through the second period on Klassen’s team-leading 23rd of the season. After receiving a cross-ice pass from Marek Alscher in the offensive zone, the Hawks’ captain deftly maneuvered around a sliding Holt at the left post and tucked home the go-ahead goal. But as the period wore on, the Royals continued to push and grabbed two late tallies from Patton and Reggie Newman for their first lead of the evening through 40 minutes.

Down by one heading into the third, Portland turned to its second-leading scorer Fromm-Delorme who finished an Aidan Litke setup from behind the net with a one-timer from the slot 2:26 into the final frame. Two more Victoria tallies from Marcus Almquist and Jake Poole put Portland behind 6-4 heading into the final five minutes, but the resilient Hawks rode Klassen’s one-time blast at 16:50 and Fromm-Delorme’s deflection of a Lucius shot two minutes later to the extra frame.

The Winterhawks are back in action tomorrow night against the Lethbridge Hurricanes at 6:00 P.M. at Veterans Memorial Coliseum.

“It’s awesome, the ‘American Line’ as we call it in the locker room. (Jack and James) are two great guys. I sit by Jack in the locker room – I’ve really gotten to know him well, and ‘Stef’ too…Obviously, chemistry is a big thing, especially with your linemates. I’ve known those guys a bit before, played against them when I was younger, so it’s great to play with them now, they’re awesome players.”