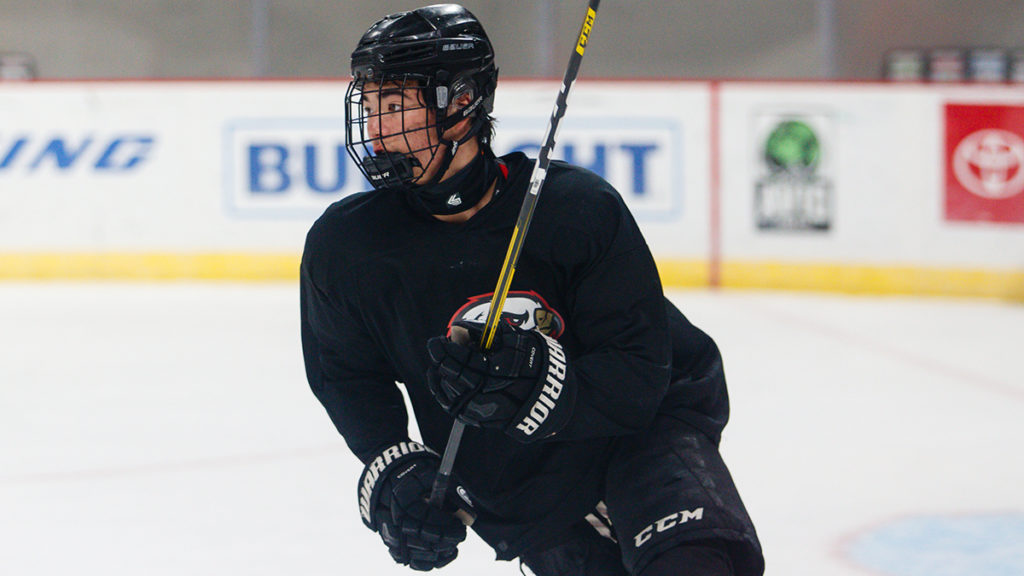 Over a span of five days, more than 50 Winterhawks players, prospects, and camp invitees had the opportunity to impress Portland’s brass at the 2021 Neely Cup Training Camp.  One player who stole the spotlight at Veterans Memorial Coliseum: Tanner Bruender.

“He scored five goals in his first camp, demonstrated a power forward game, and his drive and compete level were on full display.  He understood that his game translates very well to our style of play and was one of the top players last weekend,” Mike Coflin, Assistant to the General Manager and Director of Scouting, said.

What makes it more impressive is how the 15-year-old forward stood out in a camp in which ten current, rostered Winterhawks are scheduled to skate at NHL camps this month.

Bruender, who grew up in Milwaukie and played seven years with the Portland Junior Winterhawks, was selected by Portland in the fifth round of the 2020 WHL Prospects Draft.  However, due to the COVID-19 pandemic and local health policies in place, the Winterhawks were unable to host Bruender and their other newly drafted players last fall.

After a year’s worth of anticipation, the center got his first taste of Western Hockey League camp with the organization he grew up idolizing.

“It’s been great.  Just coming here and playing with all the older players, they bring you in and take you under their arm and they help you develop here,” Bruender said.  “I feel like I’ve gotten better just over the week because the other players are helping me learn from my mistakes.”

Bruender provided a boost for his team, potting five goals throughout the week, and played a physical brand of hockey during the Winterhawks 46th annual training camp.  As a member of Team Hill, Bruender and his 16 camp teammates won the 2021 Neely Cup Championship.

“It’s always been a dream to win the Neely Cup with the Winterhawks so it’s pretty cool,” the former Portland Junior Winterhawk said.

After learning to skate at the Winterhawks Skating Center in Beaverton, it brought back fond memories wearing the Hawks crest again. “I can’t even describe it.  Even with the new logo, it still feels the same.”

Bruender played the last two seasons in Minnesota, most recently with Chaska/Chanhassen Bantam AA program.  In 38 games last year, Bruender scored 36 goals and 62 points, as he learned how to be a leader at the next level.

The gifted forward parlayed his big bantam season into an impressive showing at USA Hockey’s Select 16 Development Camp in New York, competing against the top U.S.-born players in his age group.

As a young prospect, Bruender plays a complete game.  He is efficient both offensively and defensively, and can play a physical style when needed.  With the 2021-22 season quickly approaching, Portland fans have plenty to be excited about in Bruender.

“The development in Tanner’s game has been steady since our Minnesota Scout Jeff Pilacinski and U.S. Director of Scouting Eric Doyle first identified him as a 14-year-old prospect,” Coflin noted.

“He established himself in the top tier of forwards in the deep Minnesota 2005 age group.  In the past few months, his maturity, confidence, and attention to detail have been impressive.  Our hockey staff and coaches are very excited about his potential as a player in Portland.”