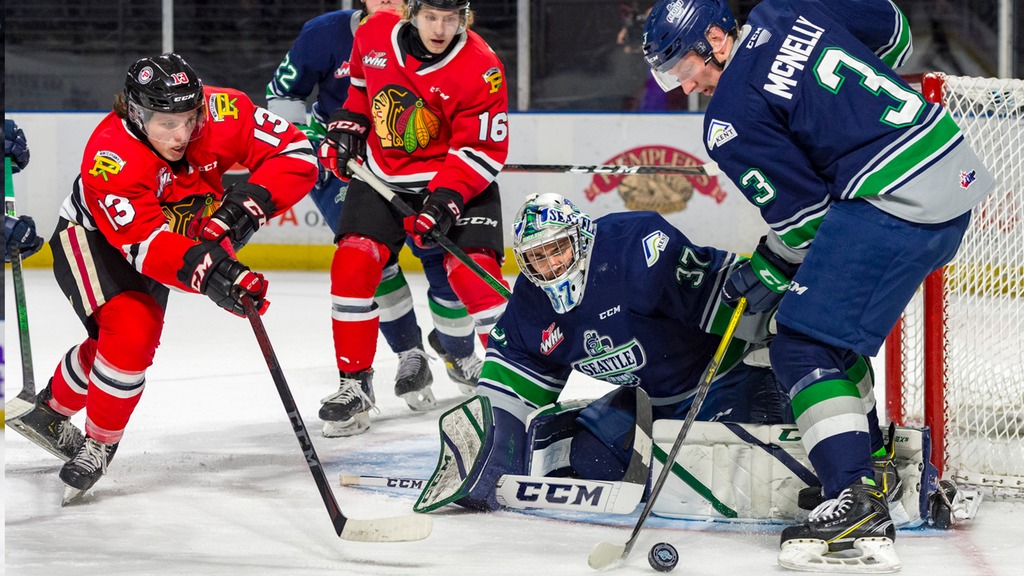 A back-and-forth first 40 minutes concluded with Seattle striking for the game-deciding goal in the third.

The third game in three days on the weekend was the seventh and final meeting of the season with Seattle for Portland, putting a bow on the I-5 Rivalry season series.

For the third time in the last five games the Winterhawks allowed a goal in the first two minutes, getting behind early.

As it turns out Seattle’s first was just setting the tone for a both physical and high scoring battle.

Kyle Chyzowski made a great play on an offensive zone faceoff and then 1:33 later Jaydon Dureau used his speed to create on the power play – all of a sudden putting Portland ahead 2-1.

Seattle had claim on the next two goals though, beating Dante Giannuzzi, who made the start despite starting Friday and playing 48 minutes in relief last night.

Behind 3-2, then the Winterhawks responded with two of their own, another power play tally from Dureau and a beautifully placed shot from Reece Newkirk.

It's not hard to see why the @TBLightning drafted Jaydon Dureau when he's doing stuff like this. 😍 pic.twitter.com/LuVG4egnH7

Before heading into the third, Seattle knotted the game at 4-4, culminating a crazy first two periods.

In the final frame of regulation both sides tightened up play, cutting down each other’s scoring chances.  The prime opportunity of the period came when Simon Knak was awarded a penalty shot, however lost control of the puck before being able to pull off of a move.

Gifted another chance to take the reigns, Portland had a five-on-three inside the final ten minutes, but again was unable to snatch the lead.

Seattle wouldn’t offer another chance, as they struck for the game-winner with just 1:52 on the clock.

“Considering three games in three nights I liked our energy.  Our shot totals probably weren’t were we wanted them to be, but I thought we had some looks, I liked our rhythm from our bench.  I thought we had four lines contributing, I thought we were fine after 40.  I’d like to be a little tighter defensively, for a little bit it felt like the last shot was going to win, but they got a couple bounces.”

– The I-5 Rivalry wraps up for the season with Portland winning five of the head-to-head meetings.

– The team will now turn it’s attention to Tri-City Wednesday night in Kennewick at 7:05 p.m.