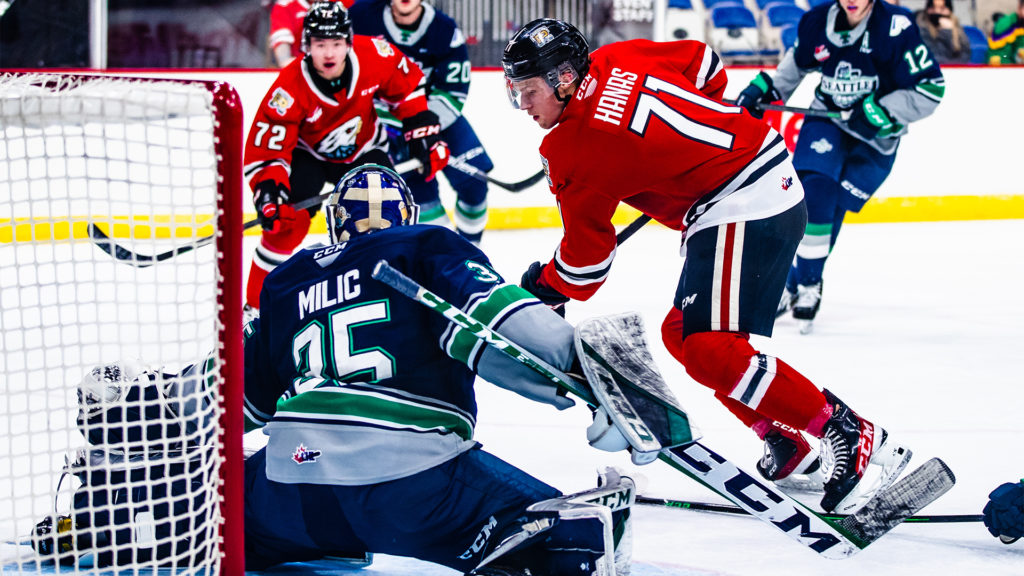 Portland tallied four unanswered goals in the final 26 minutes to knock off Seattle for a third consecutive meeting.

A second consecutive two-goal game from Tyson Kozak helped propel the Winterhawks past the Thunderbirds 5-1 on Saturday night. Taylor Gauthier stopped 27 shots to remain perfect in a Portland sweater (4-0-0-0).

The Winterhawks scored inside the first three minutes for a second consecutive game when Gabe Klassen picked the pocket of a Seattle defenseman and banked a shot off of Thomas Milic for an early Portland lead. The two teams traded chances for the remainder of the opening frame, with each team’s netminder coming up with some sterling stops.

In the middle frame, Seattle mounted an attack and broke through via Conner Roulette, who scored a similar bank goal to Klassen’s at 7:51. But Portland continued to press, and regained the lead on the power play at 14:02. Cross Hanas found Clay Hanus for a one-timer at the top of the right circle and Kozak deflected the puck through Milic’s equipment to put the Hawks up 2-1 heading into the third.

Kozak doubled his team’s lead midway through the third, finishing off a rush with Hanas and James Stefan with a bullet one-timer into the top corner, and the rout was on. Hanas tallied an empty-netter and Jonah Bevington chipped in a very late goal to push the Hawks to a 5-1 victory.

Portland gets right back on the ice Sunday with a matchup against the Spokane Chiefs at 5 p.m.

“It was kind of just a blur. I kind of got hit and just chipped it in, then I was heading back to the bench and just hear the crowd cheering. Just such a special moment I’ll never forget…This is gonna be a big rivalry while I’m here, so I might as well get started.”