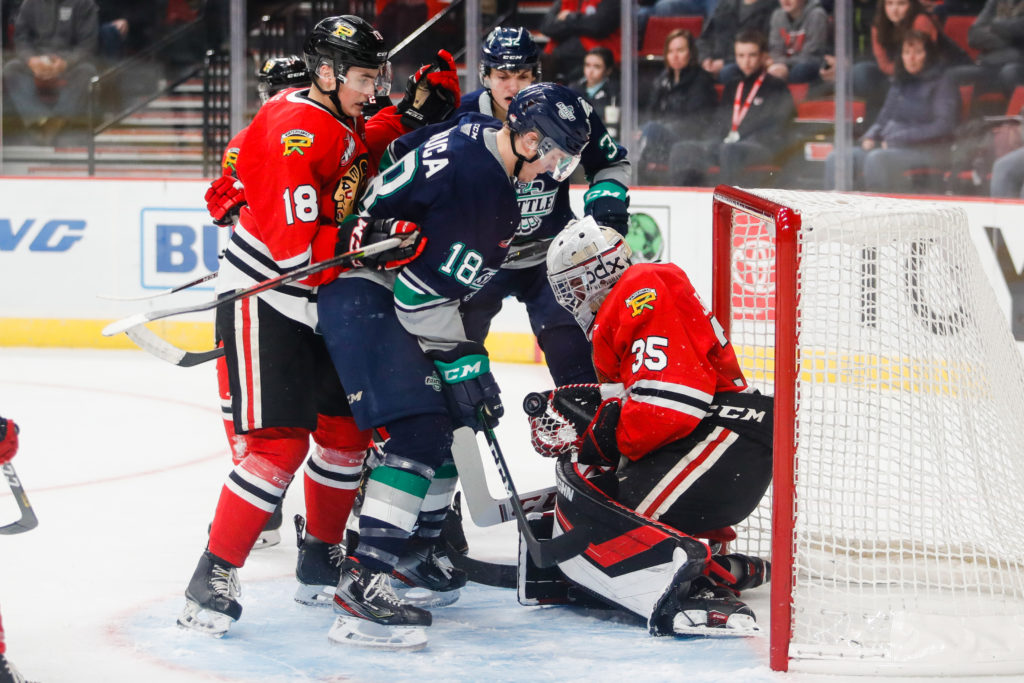 The Portland Winterhawks earn their fifth point of a possible six this weekend, but they fell just short in a Sunday shootout with Seattle. The Thunderbirds scored a late goal with under a minute to play in regulation to force overtime, and ultimately beat the Hawks 4-3 in a shootout.

The Thunderbirds came to town to wrap up their three-in-three weekend and needed just over six minutes to score the first goal of the night. Sixteen year old Conner Roulette scored on a breakaway to give Seattle a first period lead.

Portland came out the quicker team in the middle period and they cashed in twice before the midway point of regulation. James Stefan scored his second goal and fourth point in the last 24 hours and Seth Jarvis banged in a team-leading sixth power play goal to put the Hawks on top 2-1. Seattle would tie the game at 2-2 a few minutes later to take into the third period.

Once again, Portland was opportunistic and able to recapture the lead as Jake Gricius snapped in his 12th goal of the season from the slot. Seattle had other plans, though. Portland gave up four power play chances in the third period and the Thunderbirds were eventually able to score with an extra attacker and 45 second left on the clock. Roulette netted his second of the night after jamming in the puck in the crease to force overtime.

After four combined overtime shots between the two teams, the game headed to a shootout for the second consecutive time in the rivalry match-up. Portland drew a blank on all three shootout attempts, Isaiah DiLaura turned aside the first two shooters, but it was Roulette’s night, and he scored the shootout winner to give the Thunderbirds their 11th win of the season.