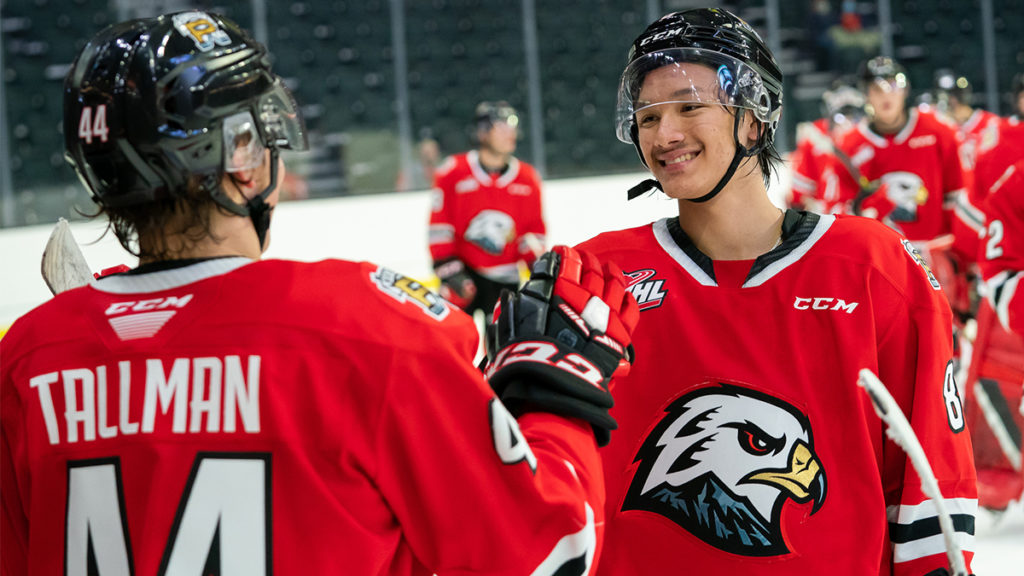 The Winterhawks won their third straight preseason game, shutting out the Spokane Chiefs 3-0 on Friday afternoon in Kennewick, Wash.  The Hawks have one final preseason tune-up on Saturday evening against the Tri-City Americans.

*It was announced over the PA inside Toyota Arena that Lochlan Gordon made 14 saves in the third period.

The Winterhawks could only dress 15 skaters and two goaltenders for Friday’s contest due to players still being away at NHL camps, but that didn’t phase the Hawks against their third different U.S. Division opponent of preseason.

“You’ve got to change quick and today there were some stoppages in play where we just decided to change them on the short side,” Head Coach and General Manager Mike Johnston said.  “Maybe it was only a 30 second shift, get a new line out there, but I think our guys are starting to, after a couple weeks on the ice, get in game shape, which is good to see and not too many players complain about extra ice time.”

With a +11 goal differential, it’s safe to say it has been a strong preseason for Portland.

Fourth year forward Robbie Fromm-Delorme potted the team’s opening goal of the game on the power play and the Hawks never looked back.  “The way they were playing on their penalty kill, I just saw to attack,” Fromm-Delorme said postgame.  “It was good to get us on the board first because you know when we go up first in games, usually we pull out with a win.”

The Hawks did just that.  Portland has scored in eight of its nine periods of preseason play thus far.

“In the first two games we played in Everett, we could score, we generated chances, and I thought today we played more of a balanced game with a shortened line-up,” Johnston said.  “Once again, we were going only three (forward) lines and I thought the guys juggled their responsibilities well, they played on the defensive side of the puck and I thought we had some good discipline tonight.”

To further add to that message, defenseman Josh Mori scored his first goal of the preseason while skating that third period shift as a winger.  “Playing forward, I guess I get a few more chances,” Mori said with a chuckle following the team’s win. “It felt great and coming back to the bench all the boys were pretty fired up and it’s great to get another insurance goal to go up three-nothing.”

Mike Johnston was vocal after the opening weekend of preseason play that he wanted his team to limit their penalties.  They did just that on Friday, earning eight total power plays.

“We had that one power play with five 16 and 17-year-olds on it and it’s good for those guys to get a chance to play on the power play, play on the penalty kill, get quality time and that’s what exhibition play is about when certain guys are away,” Johnston said.

“Playing on the penalty kill and the power play really helps me improve and gain a little bit of confidence,” Mori added.  “Being able to learn just how fast these guys move the puck and having patience because we love blocking shots.  It’s important that I get in front of them and I know that any blocked shot, the boys will get fired up and it gets them going.”

Portland saw last season how much the team benefits from winning the special teams battle.  Tonight was another reminder of that.

Goalies getting it done

Only allowing three goals this preseason?  Equally as impressive.

Dante Giannuzzi drew his third consecutive start and once again played tremendous between the pipes.  After a five save first period, the Winnipeg, Man. native denied a penalty shot attempt in the opening 80 seconds of the second frame and finished with 17 stops.  Lochlan Gordon, once again, came into the game in the third period while the Winterhawks were on the penalty kill, but he did his job and looked calm in the crease.

“I thought both our goaltenders did a good job tonight,” Johnston said.  “There were some bounces off the glass and boards which were different and they handled it well.”

“They played great,” Mori added.  “Dante played amazing in the first two periods. There were a lot of tipped shots, I don’t know how he gets those, and then Lochlan comes in and plays great.  He’s amazing at finding shots through guys and it’s unbelievable how he really locks in like that.”

Both goalies rank in the top five of WHL netminders in save percentage and goals-against-average.