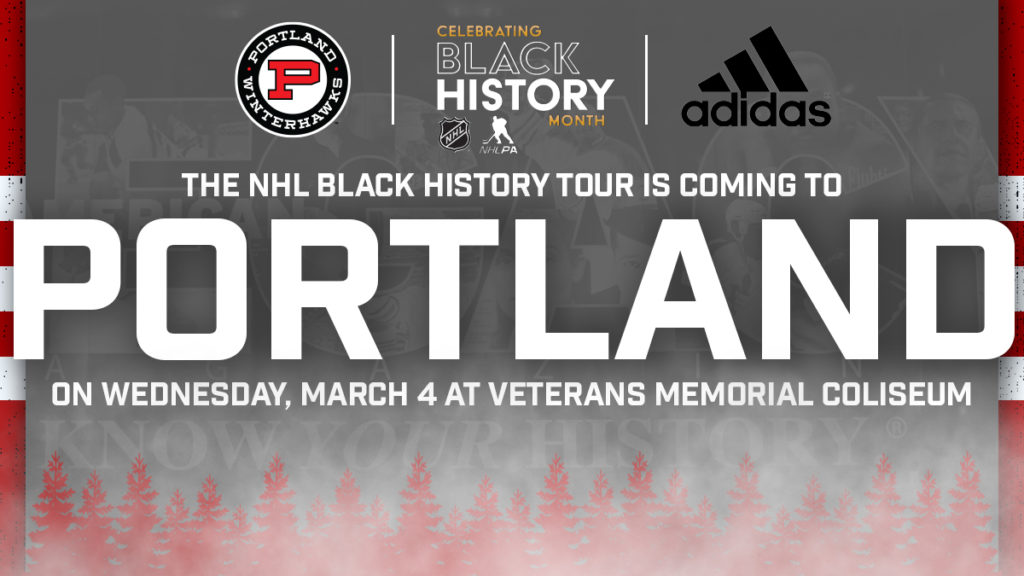 Portland, OR – In celebration of Black History Month 2020 the National Hockey League (NHL) has announced the NHL Black Hockey History Tour presented by American Legacy will make an appearance in Portland, Oregon on Wednesday, March 4th at the Rose Quarter. The event is made possible in Portland thanks to Adidas. The Black History Month celebration is part of Hockey Is For Everyone, a joint NHL and NHLPA initiative that has celebrated diversity and inclusion in hockey since 1996.

This uniquely curated mobile museum will visit 14 NHL cities across North America to celebrate today’s stars, while also looking back at the pioneers and trailblazers who helped shape NHL history. Portland is the only non-NHL city the bus is stopping in and will be open to the public from 2pm through 7pm and will align with the Portland Winterhawks and Portland Trail Blazers home games.

This year’s museum has been refreshed and redesigned offering fans a new experience as they learn about some of the biggest moments, milestones, and playmakers in hockey. A few museum highlights include:

“The NHL has a rich history of black and other minority players who have helped shape the game of Hockey. We are honored to be the only non-NHL city to play host to the Black Hockey History Mobile Museum which will provide Portland with the opportunity to celebrate the leaders, pioneers and trailblazers who have changed the face of the game.  This will be a fun and educational way to introduce new people throughout our diverse community to the rich legacy of the sport of Hockey,” Doug Piper, President of the Portland Winterhawks.