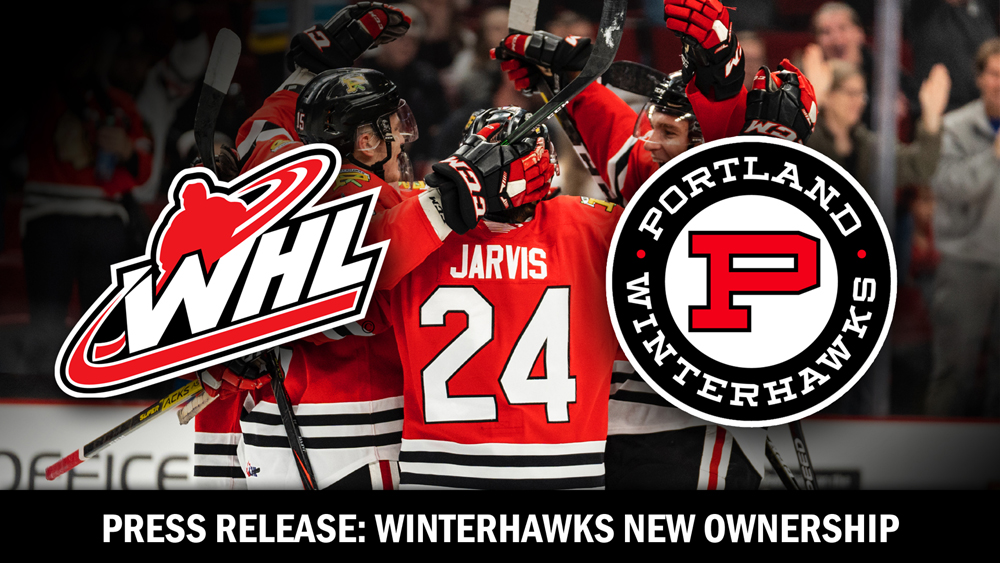 Winterhawks General Manager and Head Coach Mike Johnston, team President Doug Piper, and all key staff across the three companies will remain with the organization.

“Mike Johnston and his staff created one of the most successful and highly-respected hockey development models in the world, while Doug Piper has laid the foundation for successful business operations in the Portland market,” said Kramer, owner, and CEO of New York City-based boutique investment firm Ducera Partners. “We are excited to inject our experience in both hockey and business to push this franchise to new heights. We are committed to this team, to the fans, the city of Portland, and to the local hockey community.”

Founded in Portland in 1976, the Winterhawks will remain in the region for the long term. A lease extension is in the works to continue playing at the Veterans Memorial Coliseum. The group intends to hit the ground running on January 1st.

“One of our first objectives is to connect with the fans, sponsors, and community leaders to get feedback on the team and its presence in the community,” said Kramer.

The ownership group will also be active in working with the WHL along with city and state officials to develop a plan for the Winterhawks and its players for the remainder of the current season. This plan will include resuming activities at the Skate Center and the Winterhawks Junior Hockey programs.

“Our goals are far bigger than just the Winterhawks’ success and winning championships,” said Preete, a retired senior executive. “We intend to be responsive to our fans and sponsors as well as good community partners. This includes development of youth hockey and figure skating in the community.”

WSG rose to the top of the long list of suitors interested in purchasing the Winterhawks, who were named the top WHL franchise by The Hockey News in 2017. The team finished the decade leading the 60-team Canadian Hockey League in total regular season wins, playoff wins, and goals scored from 2010 to 2019. Piper, Johnston, and their staff are excited about working with the group after an eight-month search for new owners.

“We are very excited to have this ownership group, headed by Michael and Kerry, be the entity that completes the purchase of the Winterhawks,” said Piper. “They are perfectly suited to be the next stewards of the Portland Winterhawks and continue our tradition of success. Their love of hockey and business acumen will help lead us to prosperity as we enter our 45th year in the Portland market.”

“We are excited to be moving ahead with Michael, Kerry and the Winterhawks Sports Group,” Johnston added. “Their experience in the business world combined with their passion for hockey will have a positive influence on our organization and the community of Portland.”

For the Western Hockey League, completing the franchise transfer to the right group of owners has been the goal from day one of the process.

“The WHL and our member Clubs are very excited to welcome Michael Kramer, Kerry Preete, and the new ownership group of the Portland Winterhawks,” commented WHL Commissioner Ron Robison. “We are fortunate to have an ownership group of this caliber take over the operations of the Winterhawks and provide the long-term stability the WHL requires for the franchise in Portland.”

Kramer and Preete are joined by longtime National Hockey League executive Peter Luukko, and several other partners in the venture. Luukko is well-acquainted with the booming market for hockey in the Pacific Northwest as he oversees renovation of the Seattle Kraken’s arena and construction of their multi-sheet practice facility. Together, members of the WSG bring extensive experience in business management, hockey franchise and arena operations, and youth league operations to the Winterhawks family of companies while being avid hockey fans.

Kramer and Preete, hope to convene in Portland in early January for a more formal introduction to Winterhawks fans, youth hockey and figure skating families, members of the local ice sports community, and media.

About the Western Hockey League
Regarded as the world’s finest development league for junior hockey players, the Western Hockey League (WHL) head office is based in Calgary, Alberta. The WHL consists of 22 member Clubs with 17 located in Western Canada and five in the U.S. Pacific Northwest. A member of the Canadian Hockey League, the WHL has been a leading supplier of talent for the National Hockey League for over 50 years. The WHL is also the leading provider of hockey scholarships with over 375 graduates each year receiving WHL Scholarships to pursue a post-secondary education

Michael was born and raised in Los Angeles California where he still has strong family ties. He is a graduate of California State University at Northridge. Michael currently lives in Connecticut with his wife and their 3 children.

Kerry Preete, a retired senior executive and currently sits on the Board of Directors of Avient Corporation (NYSE: AVNT) and Univar Solutions (NYSE: UNVR). Kerry brings not only his business acumen, but also first-hand experience as a former junior and university hockey player with the Prince Albert Raiders, Humboldt Broncos, and University of Saskatchewan in the late seventies and early eighties. He is very familiar with the WHL as he is former teammates and friends with current WHL coaches and executives including Peter Anholt and Willie Desjardins as well as Tim Leier, the father of former Winterhawks captain Taylor Leier.  As a 20-year volunteer youth hockey coach in the St. Louis area, Preete also coached and served on AAA Blues Youth Hockey board. Kerry was born and raised in Saskatchewan and currently has family ties to Western Canada. He holds an undergraduate degree from the University of Saskatchewan and an MBA from Washington University in St. Louis. Kerry and his wife have 3 sons and now currently resides with his wife in Arizona.  All three of his sons played hockey in the St. Louis area.

Peter Luukko is Chairman of Oak View Group Facilities which includes the company’s Arena Alliance. The company is involved in the development of several large-size sports and entertainment venues, including the renovation of Climate Pledge Arena, the future home of the National Hockey League’s newest franchise, the Seattle Kraken, and UBS Arena, the future home of the New York Islanders. Luukko is a member of OVG’s task force which is creating plans for how arenas and stadiums worldwide will return safely to hosting events following the pandemic. He was part of the OVG task force that successfully ensured the health and wellness of the 24 teams competing in the NHL playoff bubble in Toronto and Edmonton. The long-time NHL executive currently serves as the Executive Chairman of the NHL’s Florida Panthers, representing them on the NHL’s Board of Governors. He also was the President of Comcast Spectacor and the Philadelphia Flyers for more than 25 years. Luukko is a hockey player, hockey coach, and hockey parent. He is a graduate of the University of Massachusetts. Luukko’s oldest son Nick is a 2010 draft pick of the Flyers (179th overall). Nick Luukko played for the Dubuque Fighting Saints of the United States Hockey League, the University of Vermont, and Lehigh Valley Phantoms of the American Hockey League, and is currently on the coaching staff of the Reading Royals in the ECHL. Luukko’s younger son Max plays hockey for Sacred Heart University in Connecticut.