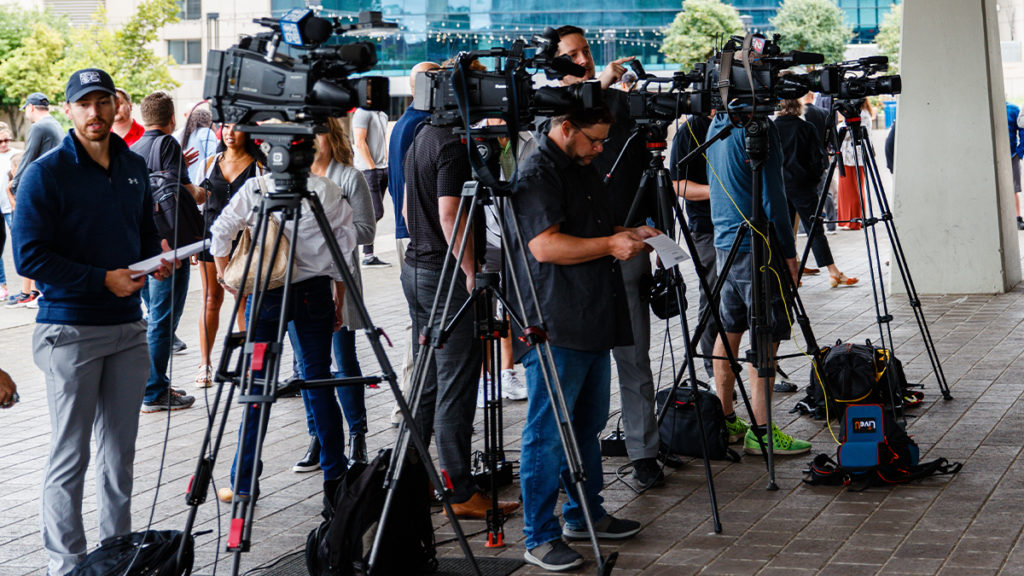 With intentions of establishing their own logo, one to not be confused with any other hockey organization and one that further embodies the Pacific Northwest, the execution was applauded and praise was given from many angles.

On Monday morning, The Oregonian’s own John Canzano broke the news that the Winterhawks would be creating their own, new identity.  The speculation started to begin – what would the new Winterhawks logo look like?

Some keen eyes may have picked up on Portland revealing it’s secondary logo and primary wordmark in a teaser video they shared that same morning as Canzano’s release.  Needless to say, the attention from Portland, the hockey community and the media was all on the Winterhawks special announcement Wednesday.

After 45 years, the Winterhawks have their own identity.

The entirety of the Portland television market was also well-represented at the event, including Joe Becker from KATU and KGW’s Orlando Sanchez.

"It represents the city, the team and how we play. It gives us a unique identity, which was very important because we do get mixed up with the Chicago Blackhawks"@pdxwinterhawks head coach Mike Johnston on the new logos. His favorite details are the P and Mt Hood pic.twitter.com/spr5v4WCsm

In addition to the TV teams, NBC Sports Northwest Dwight Jaynes was in attendance and shared his thoughts here.  Long-time area journalist Kerry Eggers’ also laid out his words.

The Athletic’s own Scott Powers dove in further to the idea of the Winterhawks using borrowed jerseys and a borrowed identity since they relocated to The Rose City.

The Portland Winterhawks have had the same logo as the Chicago Blackhawks since acquiring jerseys from them in 1976. This the story behind why the Winterhawks decided to change their logo after so much time. https://t.co/xOUpPHCSAD

this logo is actually sick, probably gonna have to use this in NHL 22 HUT https://t.co/gqvZoq6odX

The future flies today.  The Winterhawks are just a few, short weeks away from players reporting for training camp.  Not long after that, the Winterhawks will wear their new logo on their jersey for the first time.