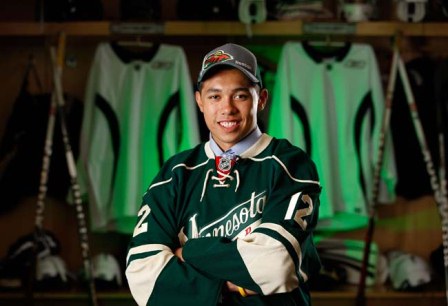 Defenseman Mathew Dumba will join the Portland Winterhawks as the National Hockey League’s Minnesota Wild have announced they are returning him to junior.

Dumba, the seventh overall pick in the 2012 National Hockey League Entry Draft, played 13 games for the Wild this season. Last month the Winterhawks acquired Dumba’s rights from the Red Deer Rebels, along with a conditional bantam draft pick, in exchange for forward Presten Kopeck and conditional picks.
“We’re excited to add a player of Mathew’s caliber to our roster as we enter the second half of the season,” said Portland Winterhawks General Manager & Head Coach Mike Johnston. “He has proven to be an elite player at this level, and the experience he’s gained in the NHL and the World Junior Championship will be tremendously valuable for us.”

The Wild recently released Dumba to represent Canada at the World Junior Championship, where he played alongside current Hawks Taylor Leier, Nic Petan and Derrick Pouliot.