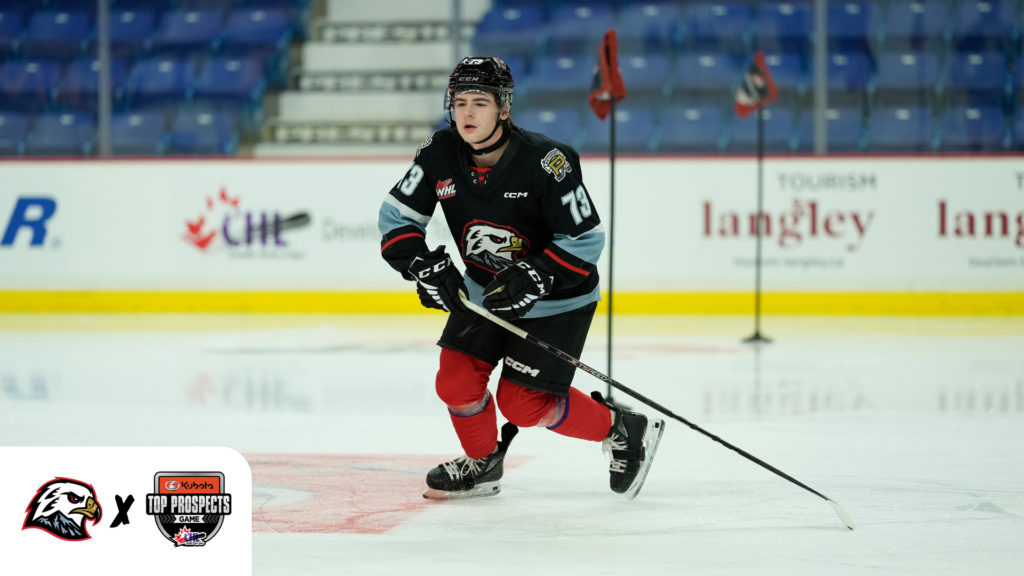 The 2023 Kubota CHL/NHL Top Prospects Game has arrived, and one of our own is hitting the ice in Langley tonight. An annual contest of high-end, draft-eligible CHL talent organized by the 32 National Hockey League clubs, the event is an opportunity for NHL scouts and GMs to see players firsthand before the annual NHL Draft.

It’s not the end-all, be-all of a player’s draft hopes, but it provides a one-night-only spectacle where they can put their skill on display for each one of their potential future clubs.

On Tuesday, Cagnoni and the other 39 invitees were put through off-ice and on-ice testing before meeting with media, where the Winterhawks’ star defenseman noted the novelty of now wearing the same jersey as players he’s worked so hard to stop this season.

As usual, Cagnoni stood out during the tests, picking up a pair of top-5 finishes in both “Reaction” – with a time of 9.577 seconds – and in “Transition Ability with Puck” with a time of 13.794 seconds, one spot ahead of consensus first-overall pick Bedard.

Check out the results from today's on-ice testing, conducted by @OkanaganHockey, at the #CHLKTP ⬇️

With day one festivities behind them, Cagnoni and Co. can look ahead to the game itself. For the Burnaby, B.C. product, playing so close to home is just the cherry on top of what has been an incredible journey to this point.

Undrafted in the WHL, Cagnoni was listed by Portland and signed with the club in March 2020. He then made a 10-game debut during the shortened 2020-21 campaign before entering the league full-time as a 17-year-old rookie last season.

“(The Winterhawks organization) means a lot to me actually, they picked me up when I went undrafted (in the WHL Prospects Draft), so obviously it’s a special place in my heart. They’re a great organization, they have a winning mentality there all the way through. Obviously, with coaches like Mike Johnston and Kyle Gustafson, they lead the way there being legends and working in the NHL and stuff like that, so it’s great there.

“It’s pretty crazy, I definitely didn’t think I’d be here right now (after being undrafted in the WHL), but I’m super thankful for everything that’s happened just to be able to get here,” said Cagnoni.

Due to his late 2004 birthday (after the September cutline for NHL eligibility), Cagnoni has the benefit of joining a predominantly 2005-born draft class. With that in mind, the smooth-skating blueliner was able to use last year as a feeling-out season, getting used to the rigors of the league and solidifying his place in it before becoming a crucial piece of Portland’s blue line this year.

“A lot of it has just been trusting Mike’s plan that he gave me ever since I went in during that COVID year, I only got like 10 games in, but those were probably the best 10 games just to get my feet wet in the league. A lot of confidence came from that. Then obviously the season before (this one) was kind of like a freebie year for me because it wasn’t my draft year or anything, so it kind of set me up for success for this year,” he said.

Through just 41 games, Cagnoni has already matched or exceeded his scoring totals from last year with nine goals, 30 assists and 39 points on the campaign. The second-year defenseman ranks fifth in team scoring and ninth in scoring among WHL defensemen, while regularly playing against opponents’ top players.

With so much draft-eligible talent in the WHL this year – some mock drafts have as many as 11 players from the league going in the first round alone – Cagnoni knows he’s being pitted against the other team’s NHL hopefuls each night, but that’s just another chance to put on a show.

“I think it’s great competition, you kind of have to show yourself every time you play one of the teams that has a top guy…it’s an elite (draft) class, one of the best to come from the WHL,” he said.

An elite class indeed, but one he fits in with perfectly.

The 2023 Kubota CHL/NHL Top Prospects Game airs live from the Langley Events Centre on NHL Network (in the U.S.) and CHL TV on Wednesday, Jan. 25 at 7 p.m. Pacific.

Help the Winterhawks ensure ‘Hockey Is For Everyone’ with our annual Pride Night game on Friday, Jan. 27 as we take on the Swift Current Broncos. Enjoy pride-themed merchandise, designed by LGBTQ+ artists, and keep an eye out on our social channels and the ice for a specialty jersey we will be wearing at the game! Proceeds from the night will benefit Pride Northwest. Get your Pride Night tickets today!