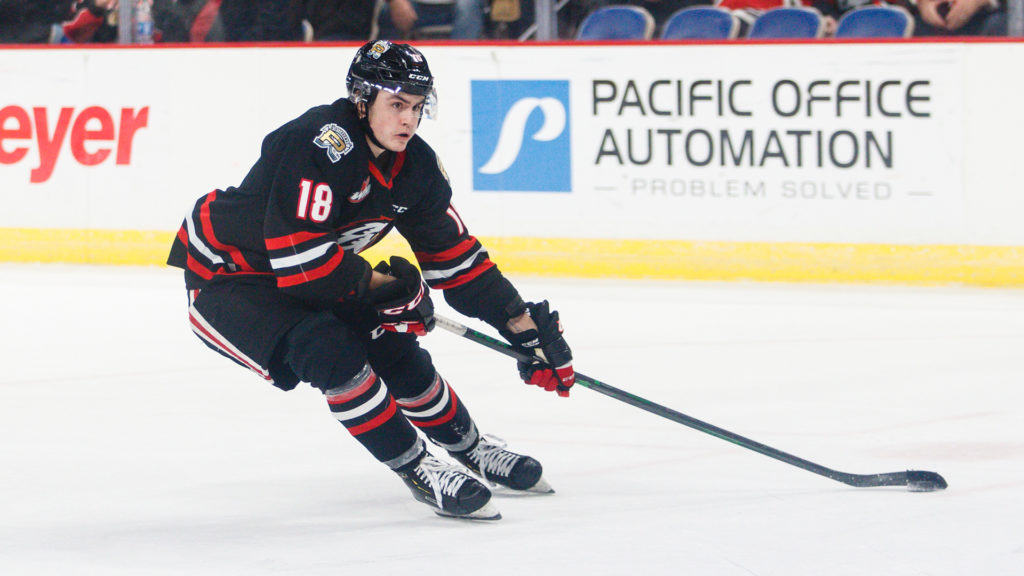 Portland stretched its point streak to nine games in a row with a 5-3 road win over the Americans on Friday.

The Winterhawks rode a pair of Tyson Kozak tallies and 27 saves from Dante Giannuzzi past the Tri-City Americans 5-3 in Kennewick on Friday. Portland has now recorded a point in nine straight games and won 13 of its last 16 contests.

The Hawks came out strong in this one as Ryan McCleary got the team’s scoring started just over two minutes into the game. The Pittsburgh Penguins prospect executed a lovely give-and-go play with James Stefan as they entered the zone, then wired a wrister over the glove of Tri-City’s Tomas Suchanek. The Americans responded with Connor Bouchard’s sixth of the season just two minutes later, but Kozak restored the Hawks’ lead at 6:56 with his first goal of the game. Portland’s co-captain finished a rush started by Jaydon Dureau and Marcus Nguyen for his 16th of the season.

Portland continued to roll as the second period got started when Cross Hanas grabbed his 10th goal of the year at 5:56. As Stefan forced a turnover in the Tri-City zone, Hanas swooped in for a short breakaway and deftly chipped the puck over Suchanek’s shoulder for a 3-1 Winterhawks lead. The Americans fought back, however, with a pair of goals from Petr Moravec and Tyson Greenway to knot things up at three before the end of the frame.

The Winterhawks started hot in the final frame, eventually earning a power play, during which Clay Hanus found Kozak alone in front for his 17th goal of the year and a 4-3 Hawks lead. Giannuzzi held strong from there and Marcus Nguyen salted the game away with an empty-net marker in the final minute to seal a 5-3 Portland victory.

The Winterhawks are back on the ice in the VMC against Seattle on Saturday night.

“That was a definition of a road game. We knew it was going to be a tight game. They’re playing really well right now and we didn’t have the best second period, but we had a really good third and we came out flying and capitalized on the power play.”