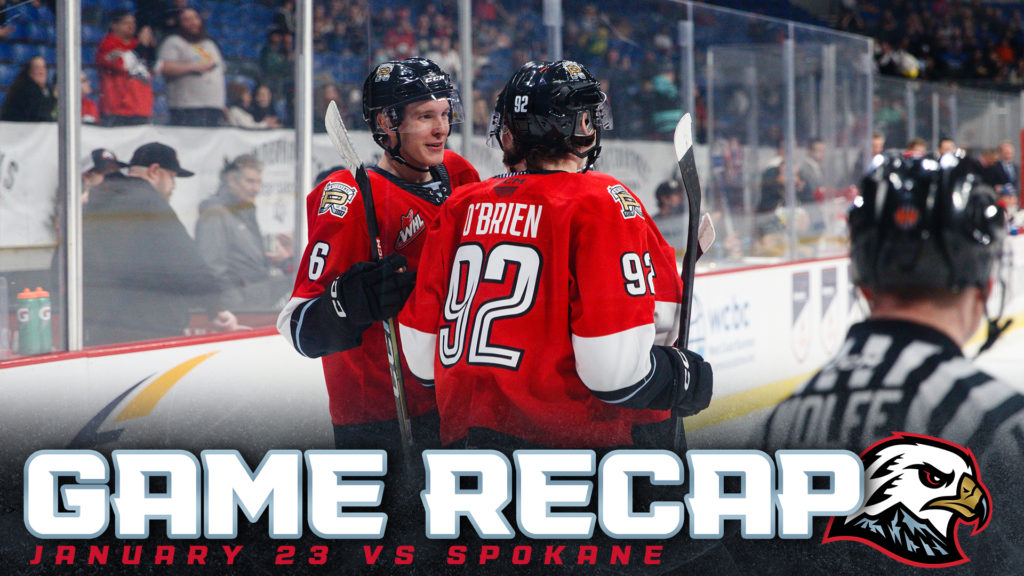 The Hawks scored just over 90 seconds into the game and never looked back, running up a 6-1 win over the Chiefs on Monday.

Gabe Klassen and Ryan McCleary each tallied twice as the Winterhawks (31-8-2-1) rattled off five unanswered goals in a 6-1 romp over the Spokane Chiefs (9-30-1-2) on Monday.

Dante Giannuzzi stopped 23 of 24 shots for his second win in as many starts, and five different Winterhawks posted multi-point performances.

The scoring flurry kicked off early with Klassen’s first of the night just over 90 seconds into the contest. The Hawks’ captain picked off a Spokane breakout pass and skated into the slot before ripping a shot into the top corner. After Berkly Catton got the visitors on the board with their only goal of the game at 8:45, it was McCleary’s turn to respond four minutes later with a dart from the left circle that sent Dawson Cowan’s water bottle flying off the top of the net.

Portland poured it on in the second period, netting four goals in the frame to effectively run away with the contest. Jack O’Brien grabbed the first with a long-range wrister on the power play 46 seconds into the period, then McCleary chipped in his second at 1:29 with a shot from the right circle this time. Back on the power play 13 minutes into the second, it was Marcus Nguyen whacking home a rebound for his 13th of the year. Finally, in the last minute of second-period action, Klassen grabbed his second of the game after some slick passing with Chaz Lucius and Jack O’Brien found him alone on the back door.

Portland next hosts the Swift Current Broncos for Pride Night this Friday, Jan. 27 at 7:00 P.M.

“After a bit of a rest day yesterday, we thought it was important to come out hot today and I thought we did that today with a good start, getting pucks deep and outworking their defense.”