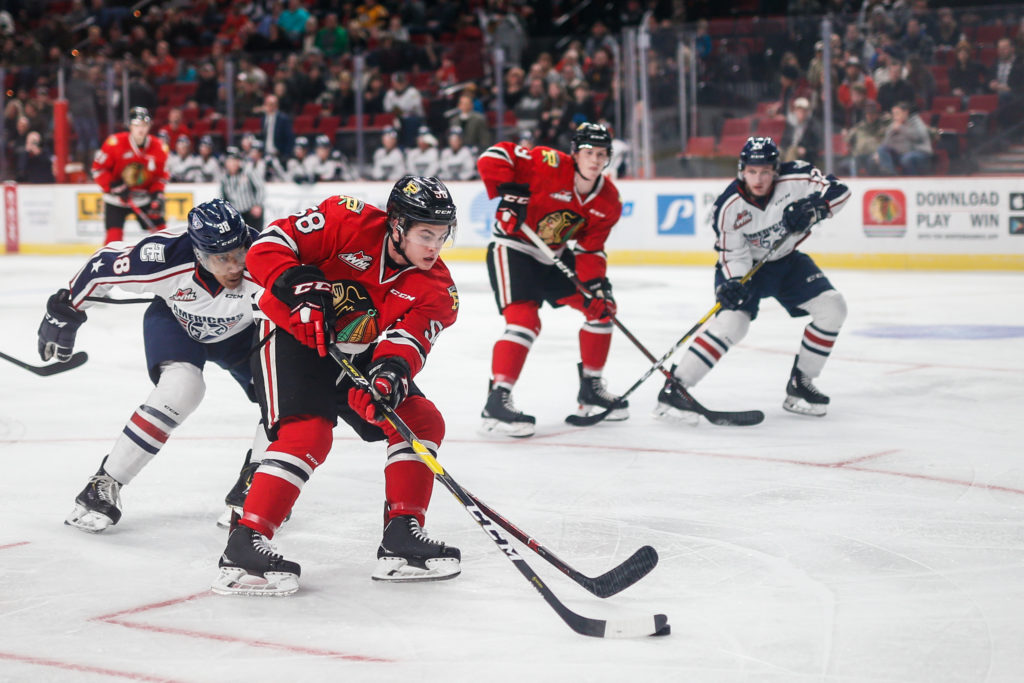 For the second straight night, the Winterhawks and Americans went to overtime. Tri-City came up on the winning end of a 4-3 final.

The goaltenders stole the show in the first period of play, turning aside the 20 combined shots they faced.

In the opening minute of the second period, the Winterhawks were buzzing in their offensive zone. Ryan Hughes won a puck battle in the left wing corner and loaded it to the slot for Joachim Blichfeld who shot it off the bar and in to give Portland a 1-0 lead.

Tri-City charged back with two goals of its own. Kyle Olson slapped in a shot from the right circle to tie the game at one apiece. A few minutes later, the Americans had a lengthy shift in the offensive zone that hemmed in the Hawks for an extended time, forcing Mike Johnston to use his timeout to make a personnel change. On the ensuing face-off, the Americans made quick work to score the go-ahead goal with Riley Sawchuk in front of the crease.

The Americans’ lead, however, only lasted 53 seconds. Ryan Hughes netted his second point of the night on a slot shot. The two teams each struck once in the third period to force extra time.

Sawchuk scored his second of the night on a 2-on-1 rush to give the Americans a 3-2 lead. Portland pushed back to tie the game before the end of regulation. With 34 seconds to play, the Hawks pulled Shane Farkas for an extra attacker and they scored on a Jared Freadrich point shot.

Joachim Blichfeld collected a secondary assist on the game-tying goal and thanks to his three-point night, he is now tied for first in the Western Hockey League with 64 points. For the third time this season, the Hawks and Americans battled in overtime,

Each team exchanged prime scoring chances in the opening moments of the overtime period, but play continued. The Winterhawks were rewarded with a power play chance with 2:20 to play in overtime. Despite a push, the Americans withheld the pressure and chased up the left wing side shorthanded. Olson scored the game-winning goal with a one-handed backhand shot, beating the Hawks 4-3 at the Moda Center for the first time in over two years.

Portland returns home Saturday, December 28th against the Tri-City Americans. Be sure to visit winterhawks.com/tickets for full details on pricing and availability.

Statement from the Canadian Hockey League
6 hours ago