Jaydon Dureau Portland To The Pros
by
Peter Dewar 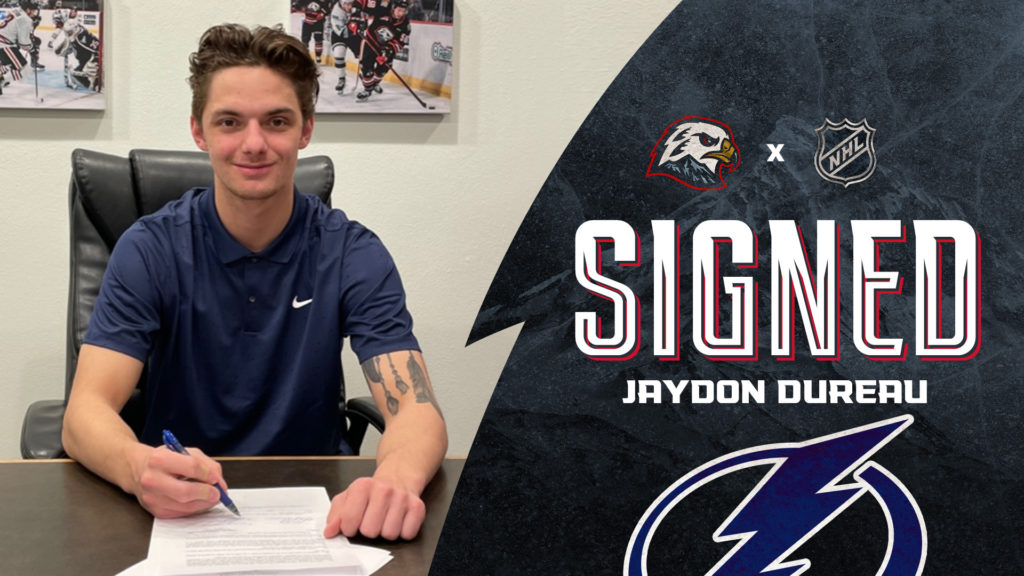 Portland, Ore. – The Portland Winterhawks, proud member club of the Western Hockey League, are proud to share that forward Jaydon Dureau has signed a three-year, entry-level contract with the Tampa Bay Lightning of the National Hockey League.

Dureau, 21, posted a career-high 24 goals this year to go with 42 assists and 66 points, which ranked fifth on the team despite Dureau playing just 49 regular-season games. His season-long average of 1.35 points per game ranked second on the team.

After returning from a stint with the Syracuse Crunch, AHL affiliate of the Lightning, in early November, Dureau quickly bolstered the Winterhawks’ attack with eight goals and 23 points in just 18 games before the end of 2021. The White City, Sask. native also became the first Portland skater to win the WHL Player of the Week award during the 2021-22 season for his play between Nov. 29 – Dec. 5, posting three goals and nine points in a three-game span.

Selected by the Lightning in the fifth round, 147th overall, of the 2020 NHL Draft, Dureau leapt onto the NHL radar with a career year in his 18-year-old season, notching 19 goals and 51 points for 70 points. That mark was second only to first-round NHL draft pick and linemate Seth Jarvis during the 2019-20 campaign.

Originally drafted in the eighth round, 163rd overall by Portland in the 2016 WHL Bantam Draft, Dureau appeared in 207 career games for the Winterhawks, notching 65 goals and 131 assists for 196 points. From 2020-22, he served as one of the team’s alternate captains. He also played 14 career postseason games, netting one goal and eight assists during Portland’s 2019 and 2022 playoff runs.

Dureau joins Cross Hanas and Taylor Gauthier as current Winterhawks to sign an NHL contract during the 2021-22 season.

The Winterhawks finished the 2021-22 regular season with 47 wins, the most among U.S. Division Clubs. Regarded as one of the nation’s elite junior hockey franchises, the Winterhawks are two-time Memorial Cup Champions and three-time WHL Champions.

The Portland Winterhawks take pride in developing their players and have produced the most NHL-drafted players among WHL teams and 131 alumni have played in the NHL, including Hockey Hall of Fame members Cam Neely and Marian Hossa and recent Winterhawks stars like Seth Jarvis, Cody Glass, Seth Jones, Nino Niederreiter, and Ryan Johansen.