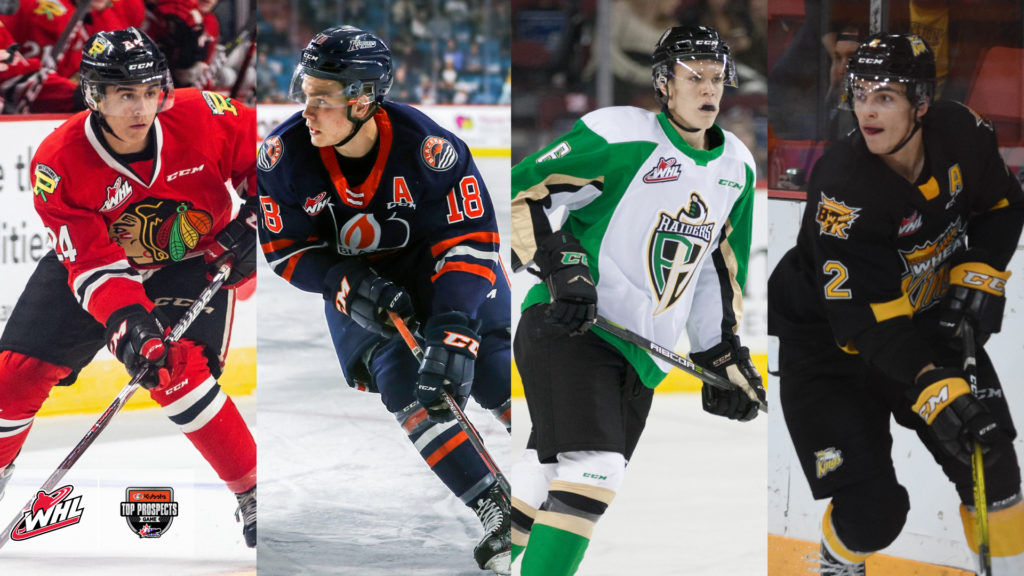 Following up the WHL spotlight highlighting the stars for Team Red at the 2020 Kubota CHL/NHL Top Prospects Game on January 16 in Hamilton, Ont., today we look at who will be lacing up for Team White.

Dylan Garand – Holding down the fort for Team White on Thursday will be Kamloops Blazers goaltender Dylan Garand. The 17-year-old has stepped into the starting role this season for the Blazers and has not looked back since. Garand is currently leading the WHL in wins posting a record of 23-9-1-1 with two shutouts. Garand has played in 65 games in the WHL posting an all-time record of 36-18-3-2 with three shutout wins, a 2.56 goals-against average and a 0.913 save percentage. The product of Victoria, B.C. is currently ranked seventh among North American goaltenders in the most recent NHL Central Scouting Midterm Rankings.

Seth Jarvis – Currently tied for first in team scoring with the Portland Winterhawks, Seth Jarvis is having a break-out season and will look to be a threat for Team White. Jarvis’ 49 points (20G-29A) has the centre from Winnipeg, Man. tied for 12th in WHL scoring. Now in his second season in the WHL, the 17-year-old has made improvements to his offensive game and already has surpassed his point total from last season. This year, Jarvis has potted seven power-play goals as well as notching four game-winning goals for the U.S. Division leading Winterhawks. The 5-foot-10, 172-pound centre is ranked 19th among North American skaters in the most recent NHL Central Scouting Midterm Report.

Ridly Greig – The second Wheat Kings player taking to the ice for Team White is 5-foot-11, 162-pound centre Ridly Greig. Now in his second season with the Wheaties, the 17-year-old has already tied his point total from last season as he sits on 35 points (15G-20A) in 37 games this season. Greig has been effective on the powerplay for Brandon registering 16 points (6G-10A) while on the man advantage as well as scoring three game-winning goals. The product of Lethbridge, Alta., is ranked 25th among North American skaters in the most recent NHL Central Scouting Midterm Rankings.

Connor Zary  – Ranked 12th among North American skaters, Connor Zary will look to continue to turn heads as the energetic centre will aim to light the lamp for the Team White. Currently third in team scoring with the B.C. Division leading Kamloops Blazers, The 18-year-old has impressed this season with 53 points (25G-28A). During the stretch, Zary is scored nine power-play goals and is tied for the league-lead with three short-handed goals. In his WHL career, the 6-foot-0, 180-pound centre has 151 points (61G-90A) in 169 regular season games.

Kaiden Guhle – The highest ranked WHL prospect participating in the game is Kaiden Guhle who ranks seventh among North American skaters in the NHL Central Scouting Midterm Rankings. Guhle is ranked 19th in defensive scoring this season with 25 points (7G-18A) in 43 games, potting four of his seven goals on the powerplay. The product of Sherwood Park, Alta. was taken by the Prince Albert Raiders with the first-overall selection at the 2017 WHL Bantam Draft. Now in his second season with Prince Albert, Guhle has registered 43 points (10G-33A) in 116 career WHL regular season games as a 17-year-old. Look for the 6-foot-3, 184-pound defenceman to continue his strong play for the Raiders in the second half of the season.

Luke Prokop – This season with the Calgary Hitmen Prokop is enjoying a career year and become a key part of the team’s roster. The 17-year-old now in his second season with the Hitmen has 12 points (1G-11A) in 39 games this season. The 6-foot-4, 219-pound defenceman was selected seventh overall by Calgary at the 2017 WHL Bantam Draft. Prokop is ranked 86th among North American skaters in the most recent NHL Central Scouting Midterm Rankings.

Braden Schneider – Closely behind Guhle in the NHL Central Scouting Midterm report is Brandon Wheat Kings defenceman Braden Schneider. The 6-foot-2, 210-pound defenceman possess two admirable traits in his smooth skating as well as his stellar ability to contribute on both ends of the ice. This year the 18-year-old has 29 points (5G-24A) in 39 games including two power-play goals and two game-winning goals. Now in his third season with the Wheaties, Schneider has 75 points (14G-61A) in 164 WHL regular season games.

Christoffer Sedoff – Rounding out the defensive end for the White Team is WHL import Chirstoffer Sedoff of the Red Deer Rebels. This year the 25th-overall selection in the 2019 Canadian Hockey League Import Draft has 15 points (3G-12A) for the Rebels. Sedoff has been effective on the powerplay this season for Red Deer, potting three goals while on the man advantage. The product of Helsinki,Fin. is currently ranked 50th among North American skaters in the most recent NHL Central Scouting Midterm Rankings.