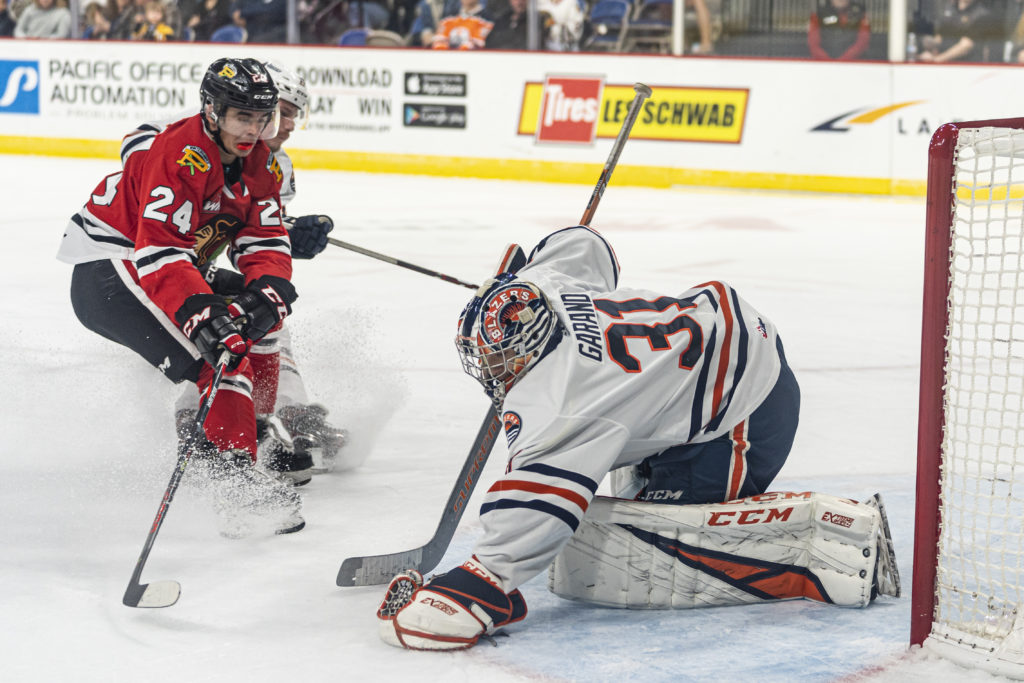 In a battle between two Western Conference power houses, the Kamloops Blazers survived a late Winterhawks attack to beat the Hawks 6-5 on Sunday night. The loss marks the first home blemish of the year for Portland.

Kamloops leaped out to a 3-0 lead in the first 12 minutes of the game with former Winterhawk Ryan Hughes scoring a goal and an assist in the opening stretch of hockey. Despite the early deficit, the Winterhawks did not go away quietly. 2020 NHL Draft prospects Cross Hanas and Simon Knak scored 38 seconds apart t0 cut the Kamloops lead to one.

After Kamloops forward Connor Zary scored on the power play to make it 4-2, the Winterhawks rattled off five of the next six goals to climb all the way back and take a third period lead. Showcasing the team’s scoring depth, three of the Winterhawks four forward lines scored in the game tonight.

Mason Mannek found the back of the net to extend his point streak to three straight games thus making it a 4-3 game. In the second half of the middle frame, Seth Jarvis scored the team’s third shorthanded goal of the season to tie it at 4-4 after 40 minutes.

Early in the third, on the power play, Jarvis added his second of the night to mount the comeback and give the Hawks their first lead of the game at 5-4. That lead, though, lasted just nine seconds. Zary followed suit and netted his second of the night and Kamloops went on to score the eventual game winning goal a few minutes later to secure their tenth win of the season.

Portland out-shot the Blazers 18-to-9 in the final frame and earned some grade-A scoring chances in an attempt to force overtime. After a week of practice, the Hawks travel to Vancouver on Friday for the first game of the home-and-home stand with the Giants.

Winterhawks Cap Off Perfect Week with a Win
2 days ago