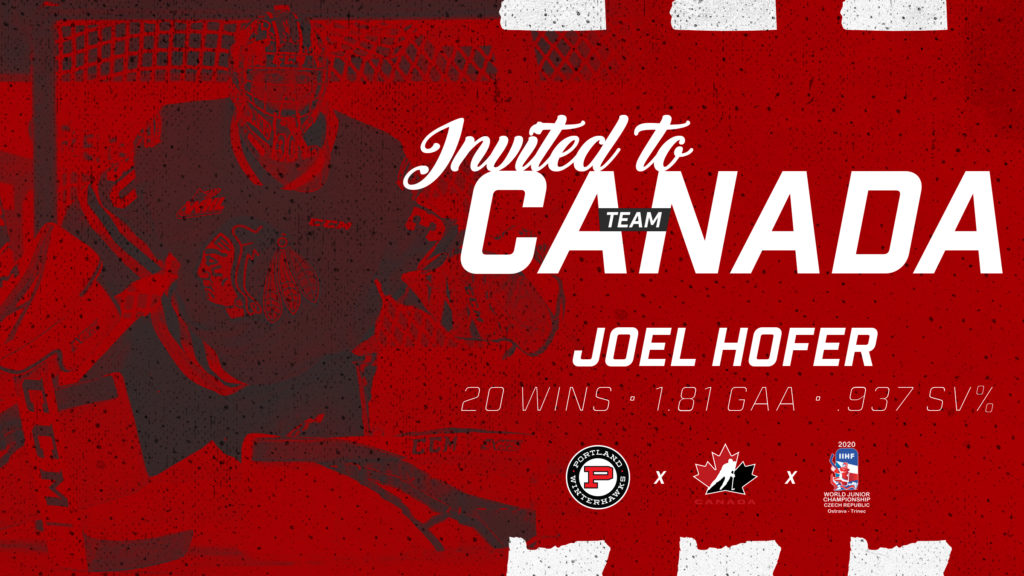 Hockey Canada announced on Thursday evening that Portland Winterhawks goaltender Joel Hofer will represent his country at the 2020 IIHF World Junior Hockey Championship in Ostrava and Trinec, Czech Republic. Hofer made Team Canada’s tournament roster out of selection camp and he will be one of three CHL goaltenders going overseas.

Hofer (6-5, 172 lbs.) appeared in two games this week at Canada’s selection camp in Oakville, Ontario. On Wednesday afternoon, Hofer made a game-high 13 saves on 15 shots in 32 minutes of work. On Thursday, the St. Louis Blues prospect stopped all seven shots he faced to close the game and he turned aside six-of-seven shooters in the shootout round.

The Winterhawks goaltender leads the WHL with 20 wins and a 1.81 goals-against-average. Hofer also boasts and impressive .937 save percentage and four shutouts.

The Winnipeg, Manitoba native is one of six Western Hockey League players who will wear the Maple Leaf this month. Team Canada has two pre-tournament games against Switzerland on December 19 and Finland on December 23.

The puck will officially drop on Boxing Day when Canada takes on the United States at 10 a.m. PT, followed by games against Russia, Germany and the Czech Republic to round out preliminary action.