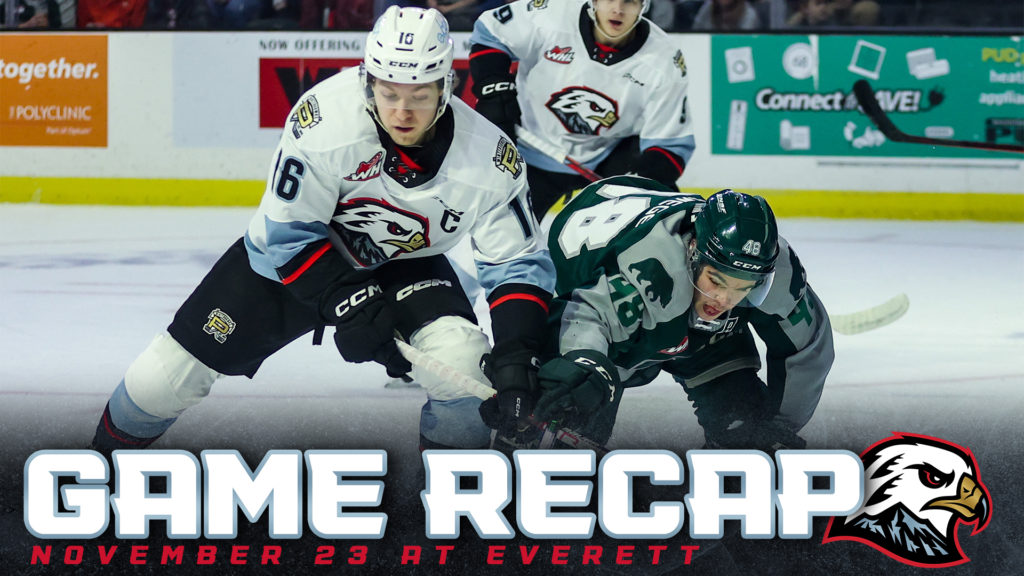 Despite giving up the first goal, the Winterhawks kept their win streak rolling with a 5-2 victory in Everett.

Five different skaters lit the lamp as the Winterhawks (17-1-1-1) picked up their ninth consecutive victory with a 5-2 win over the Everett Silvertips (12-8-1-0) on Wednesday.

Winterhawks forwards Cole Cairns and Hudson Darby each made their WHL debuts in the contest.

Everett got on the board first with a milestone moment as Tarin Smith grabbed his first WHL tally in spectacular fashion at 9:58 of the opening frame, but the Hawks tied things up before intermission on Marek Alscher’s fifth of the year. A Dawson Pasternak pass found Gabe Klassen streaking through the center lane for a quick shot that evaded Braden Holt but stayed out of the net, only for Alscher to poke it home with four minutes to play in the first.

Portland poured it on in the second period, finally taking its first lead of the night on Josh Mori’s first of the season at 14:16. Some slick stickhandling by Marcus Nguyen and a deft pass through traffic found Mori on the right wing for a one-time laser over the shoulder of Holt. Just over two minutes later, Dawson Pasternak doubled the lead with a power-play blast from the left circle off a seam pass from Josh Zakreski and Carter Sotheran’s second of two assists on the night.

Opening the third with a bang, Aidan Litke quickly made it 4-1 Hawks as he chipped home a rebound from James Stefan’s shot off the rush just 48 seconds into the final frame. Everett responded three minutes later with a Jesse Heslop strike, but an empty-netter from Zakreski sealed two points and a 5-2 win for the Winterhawks.

The Winterhawks are off for Thanksgiving tomorrow but right back in action against the Seattle Thunderbirds at 7:00 P.M. on Friday from the accesso ShoWare Center. The game will be broadcast on Portland’s CW.

“You know coming to the game I was a bit nervous, but also I’m obviously excited to just get going. It’s something you look forward to after you get drafted. It’s good to do it with these guys. Skilled team, a great team, so it’s good for my start.”

“It was really good. When you play with a team like that it makes it a lot easier. You have the nerves before the game but it’s just another hockey game so I tried to play my game.”