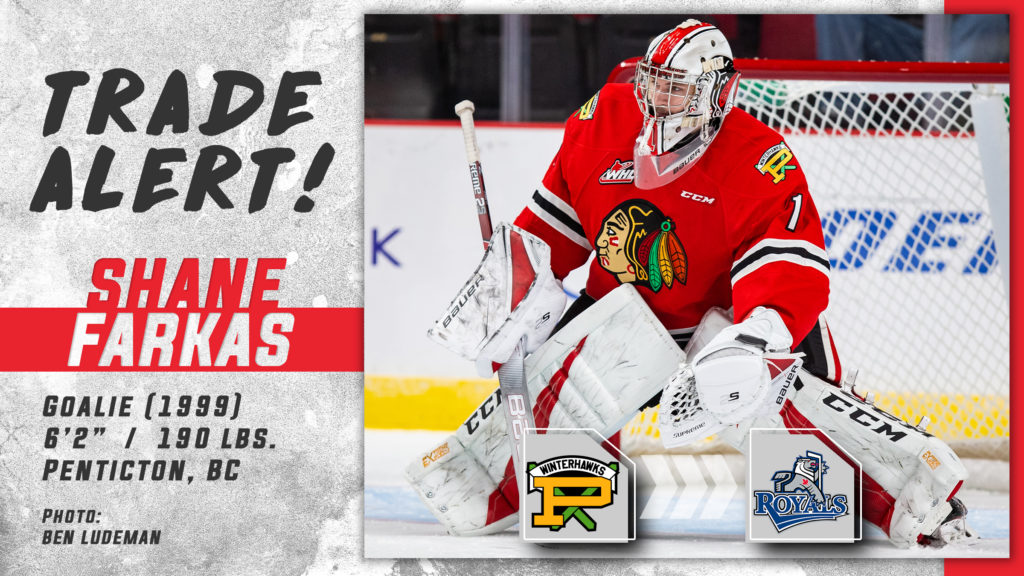 The Portland Winterhawks announced today at the WHL Bantam Draft that they traded goaltender Shane Farkas to the Victoria Royals in exchange for a fourth round pick in the 2019 draft and a conditional pick in the 2020 draft.

Shane Farkas (Penticton, BC) played two and a half seasons with the Hawks and posted a 47-24-3-4 overall record. He had a career goals-against-average of 2.92 in Portland and a .902 save percentage. After this trade, the Winterhawks still have four 1999-born players on roster heading into next season. Portland will need to make at least one more move to get down to three 20 year olds.

With Victoria goaltender Griffen Outhouse graduating from the WHL after spending four seasons in British Columbia, Farkas will slot in immediately alongside 2001-born goalie Brock Gould. The Winterhawks would like to wish Shane the best as he finishes his junior hockey career in the Western Hockey League.

Portland Receives – 2019 4th round selection (80th overall) from Victoria (via Portland*) and a conditional draft pick in 2020.
*the Winterhawks get the pick back that they used to acquire Jared Freadrich last summer

The best way to experience Winterhawks action during the 2019-20 season is with a Premier Membership.  Never miss a moment and lock in your same, great seat for all 34 or 20 regular season games and the playoffs.  With monthly payments starting at $32 per seat, enjoy exclusive benefits that only Premier Members have access to including your own personal Ticketmaster Account Manager, free Winterhawks gear, a streaming code to watch all away games, and access to the Meet the Team Party.  Call or text the Winterhawks today at 503-238-6366 to speak with a representative.