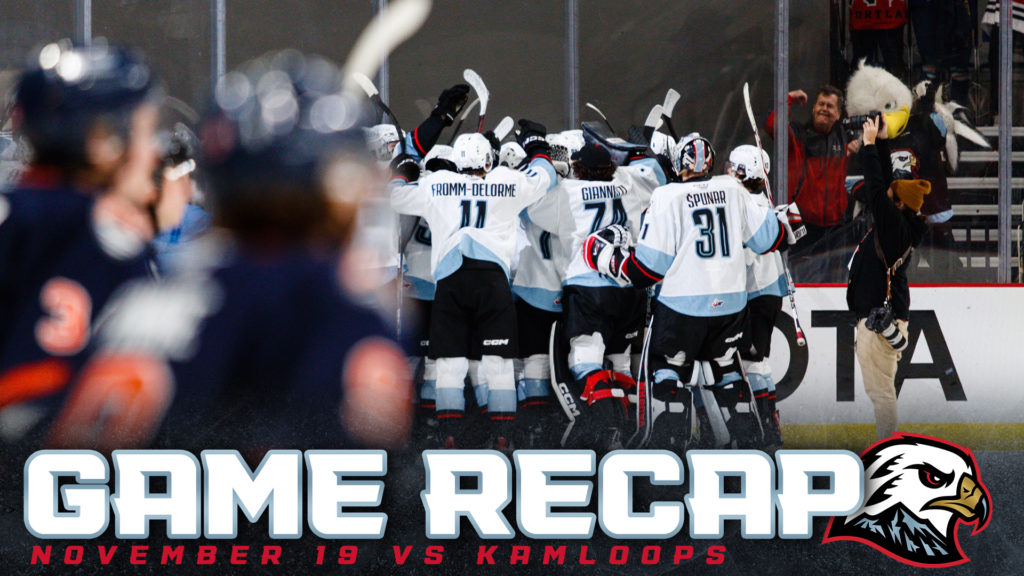 For the second time in a row against Kamloops, the Winterhawks completed a comeback to take a 3-2 OT victory on Saturday.

Down but never out, the Winterhawks erased an early two-goal hole with three unanswered tallies to top the Kamloops Blazers 3-2 in overtime on Saturday. Ryan McCleary grabbed the game-winning goal in the extra frame and Jan Špunar stopped 32 of 34 to pick up the win.

With the win, Portland has won eight consecutive games and boasts points in 11 straight (9-0-1-1). Additionally, Winterhawks Head Coach Mike Johnston picked up the 1000th and 1001st points of his WHL coaching career in his 743rd game behind the bench.

Kamloops raced out to an early 2-0 lead behind goals from Matthew Seminoff and Daylan Kuefler in the opening 15 minutes. Portland found life before the end of the frame, though, as Marcus Nguyen rifled home his eighth of the season with just 19 seconds remaining before intermission. Luca Cagnoni then capped off the early comeback 2:30 into the second period, notching his own eighth of the season with a long-range wrist shot through traffic to beat Michael Schnattinger.

A tense third period gave way to a back-and-forth overtime, where Ryan McCleary came up clutch with his fourth of the season and second career OT winner during the final minute of the extra stanza. After Jack O’Brien bulldozed his way into the Kamloops zone, he fought off a check behind the net and found a wide-open McCleary at the left circle for a tidy finish 4:45 into the five-minute frame.

The Winterhawks head north next week to take on Everett on Wednesday, Seattle on Friday and Vancouver on Sunday in a trio of road games.

“It’s obviously special. You don’t get the opportunity to score overtime winners that often, so when you pot one – especially in a game like this, a close battle with Kamloops, it’s especially nice.”