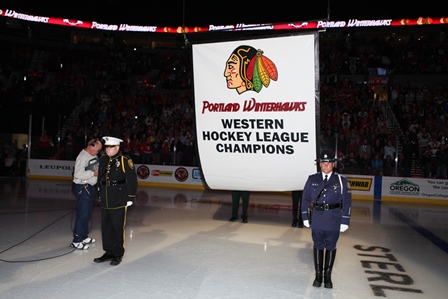 On a night when the Portland Winterhawks (1-0) raised their 2012-13 championship banner, they opened the new season with a 9-2 win against the Prince George Cougars (0-1) Friday at the Moda Center in front of 9,139 fans.

The Hawks opened the scoring 9:04 into the first period when Presten Kopeck scored on a wraparound to make it 1-0. Assists on the goal went to defensemen Layne Viveiros and Keoni Texeira, the first career point for the latter.

The Cougars tied it at the 12:21 mark on a goal by Klarc Wilson, which remained the score going into the second.

Portland then dominated the second period, scoring five straight goals to take a 6-1 lead, beginning just 1:30 into the period when Nic Petan banked one in off a Cougars defenseman to give the Hawks a 2-1 advantage. At the 6:12 mark Viveiros took a shot from the point that beat Cougars netminder Brett Zarowny for the first goal of his career and a 3-1 Hawks lead.

Kopeck scored his second of the night at the 10:53 mark of the second when he redirected a Garrett Haar point shot past Zarowny to give the Hawks a 4-1 lead and the first career point for Haar. Chase De Leo made it 5-1 when he picked up a loose puck in the crease and banged it in at the 14:45 mark, then just minutes later a terrific passing play ended with De Leo feeding Oliver Bjorkstrand on the doorstep who put it in to make it 6-1, a lead the Hawks took into the third.

Midway through the third the Hawks were on a five-minute power play after a major to Prince George, and scored three times to make it 9-1 with goals from De Leo, Haar and Anton Cederholm, the latter two notching the first of their WHL careers. Prince George added a late goal from Brad Morrison, but the Hawks came away with the 9-2 win.

Brendan Burke picked up the win in net for the Hawks with 29 saves on 31 shots. Cougars starter Brett Zarowny gave up six goals on 27 shots through two periods, and Ty Edmonds allowed three on 12 shots in the third.

Bjorkstrand led the way offensively with five points on a goal and four assists. Petan had four points, while De Leo, Haar and Kopeck each had three.

Portland was outstanding in special teams tonight, going 5-8 on the power play and 2-2 on the penalty kill.

Before the game the Hawks took a look back at their 2012-13 championship season, raising banners as the Scholastic Team of the Year, U.S. Division champions, Scotty Munro Trophy winners as regular season champions, Western Conference champions, and WHL champions.

The Hawks are back on the ice tomorrow in Seattle when they take on the Thunderbirds beginning at 7 p.m.

'Keep Portland Weird' with the Winterhawks!
24 hours ago